SIX players were ejected following a near FOUR-minute brawl during an MLB game on Sunday.

Both benches cleared during a bad-tempered showdown between the Seattle Mariners and LA Angels at Angel Stadium. 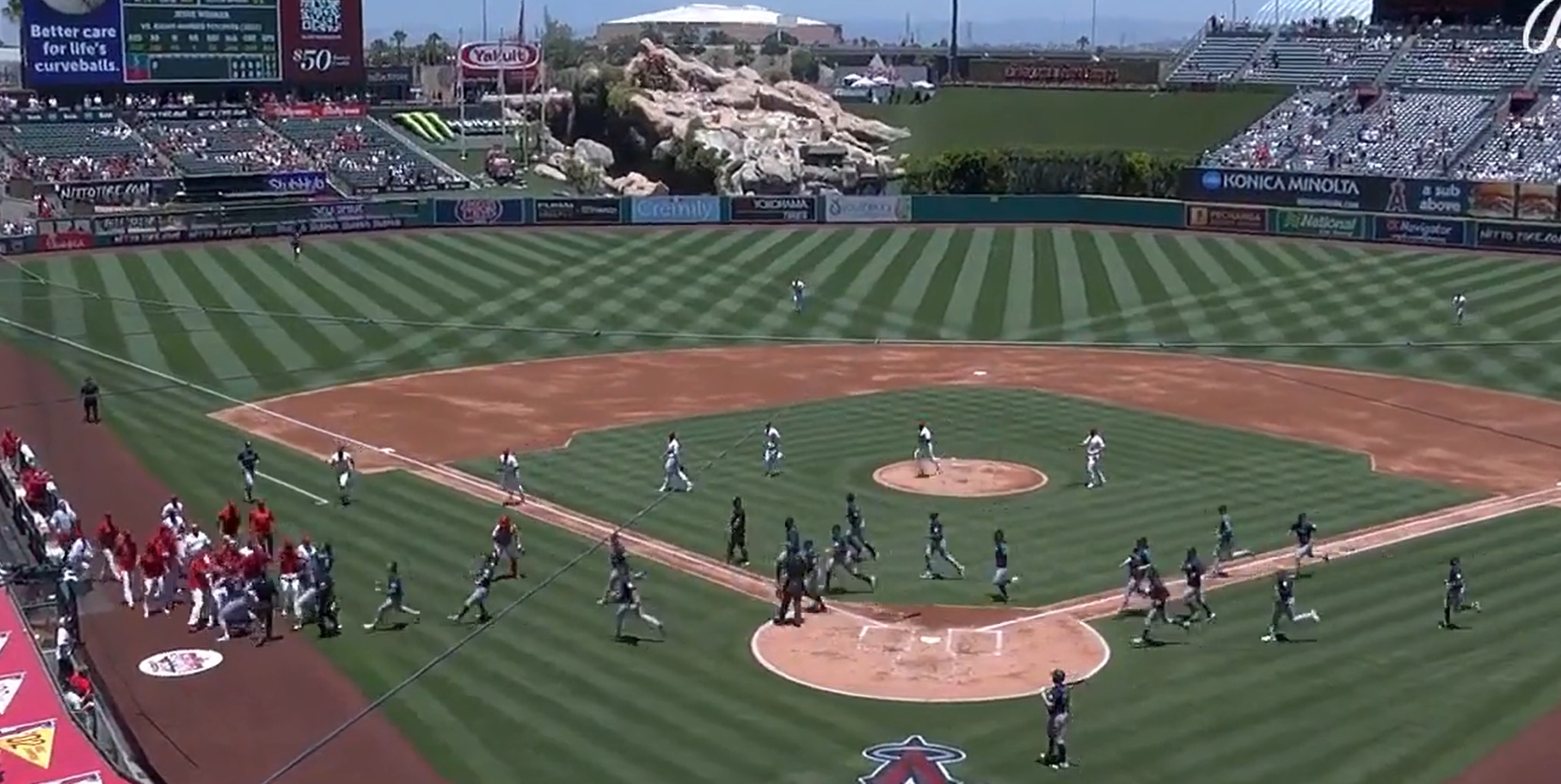 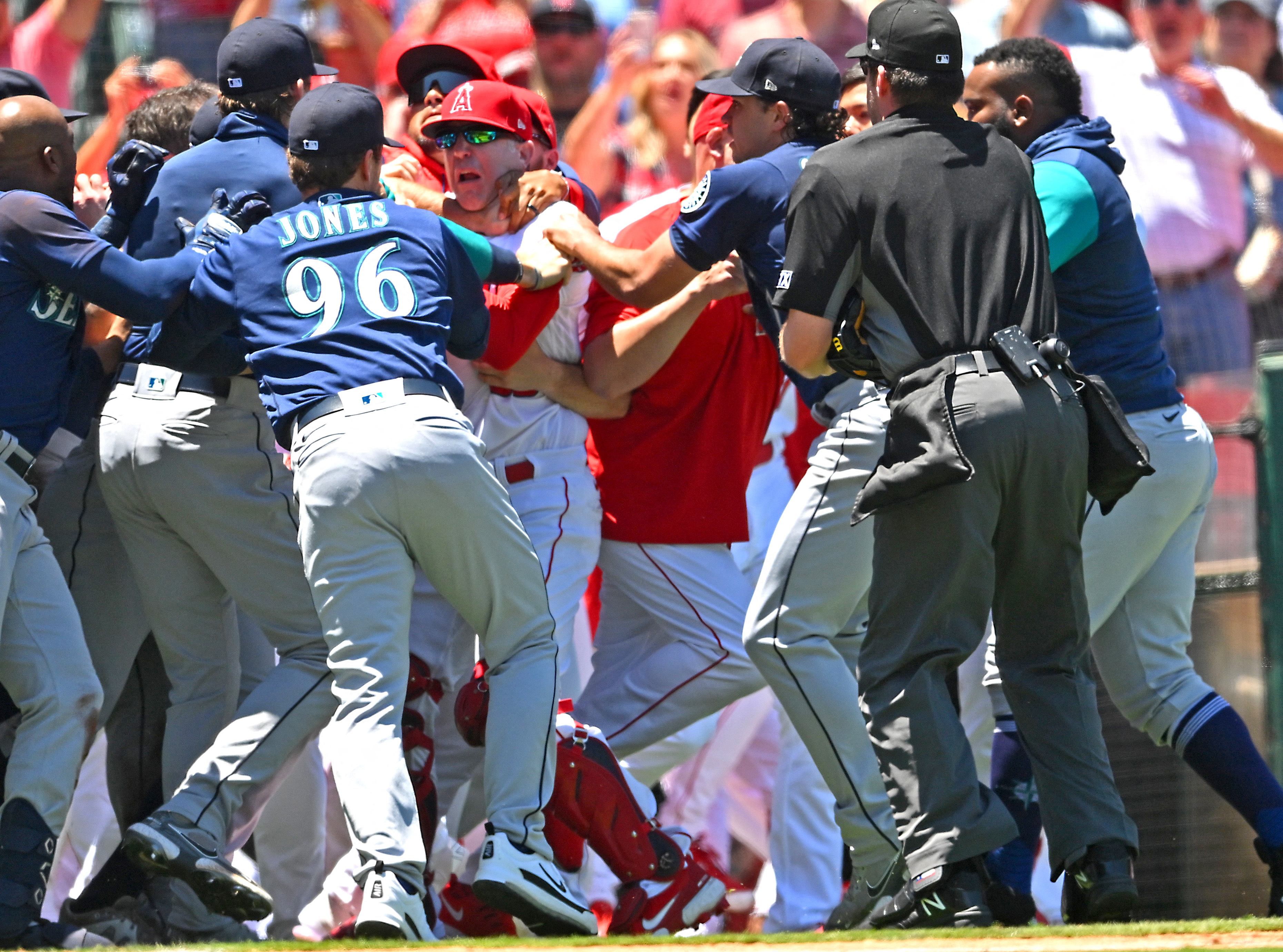 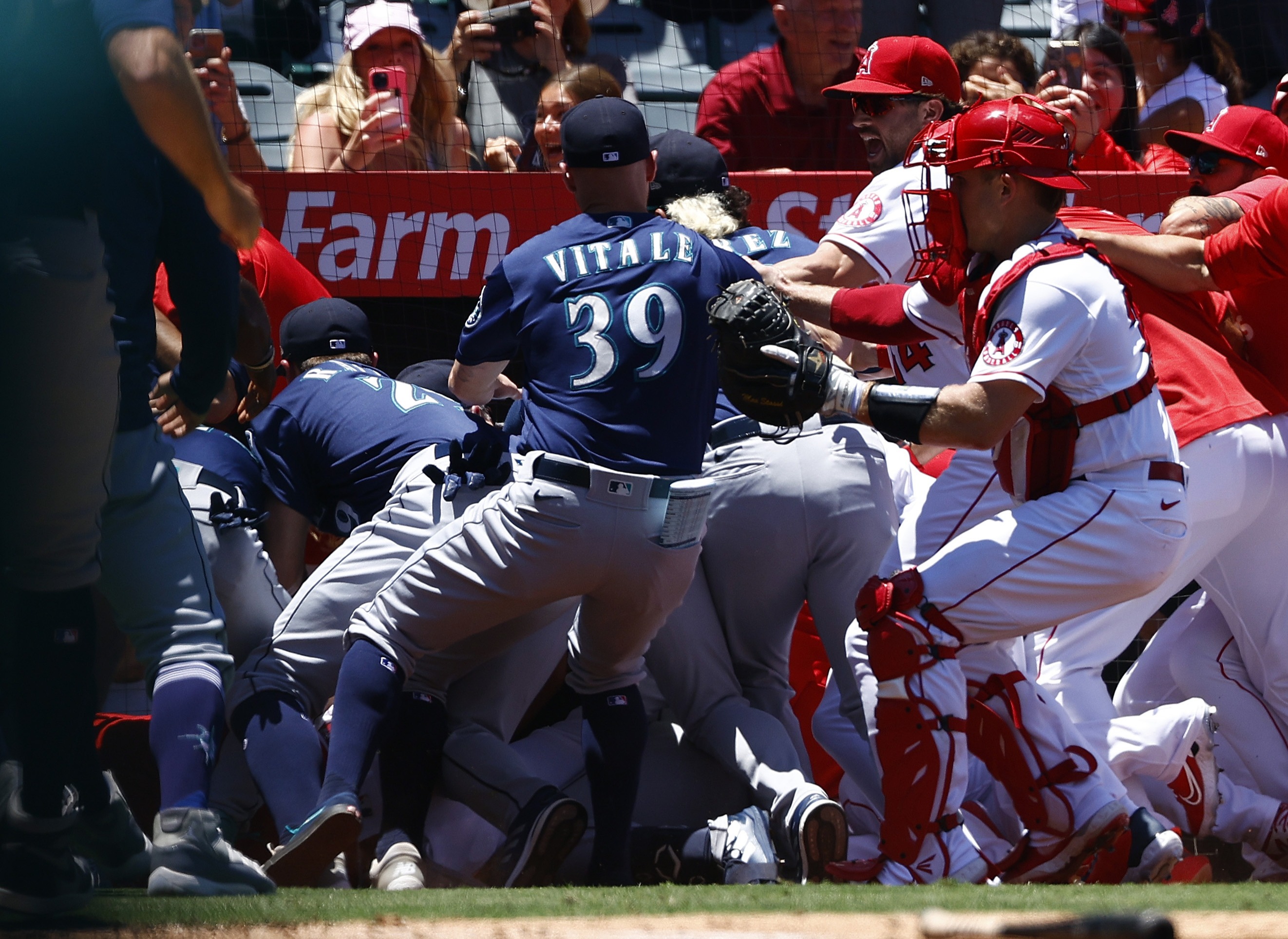 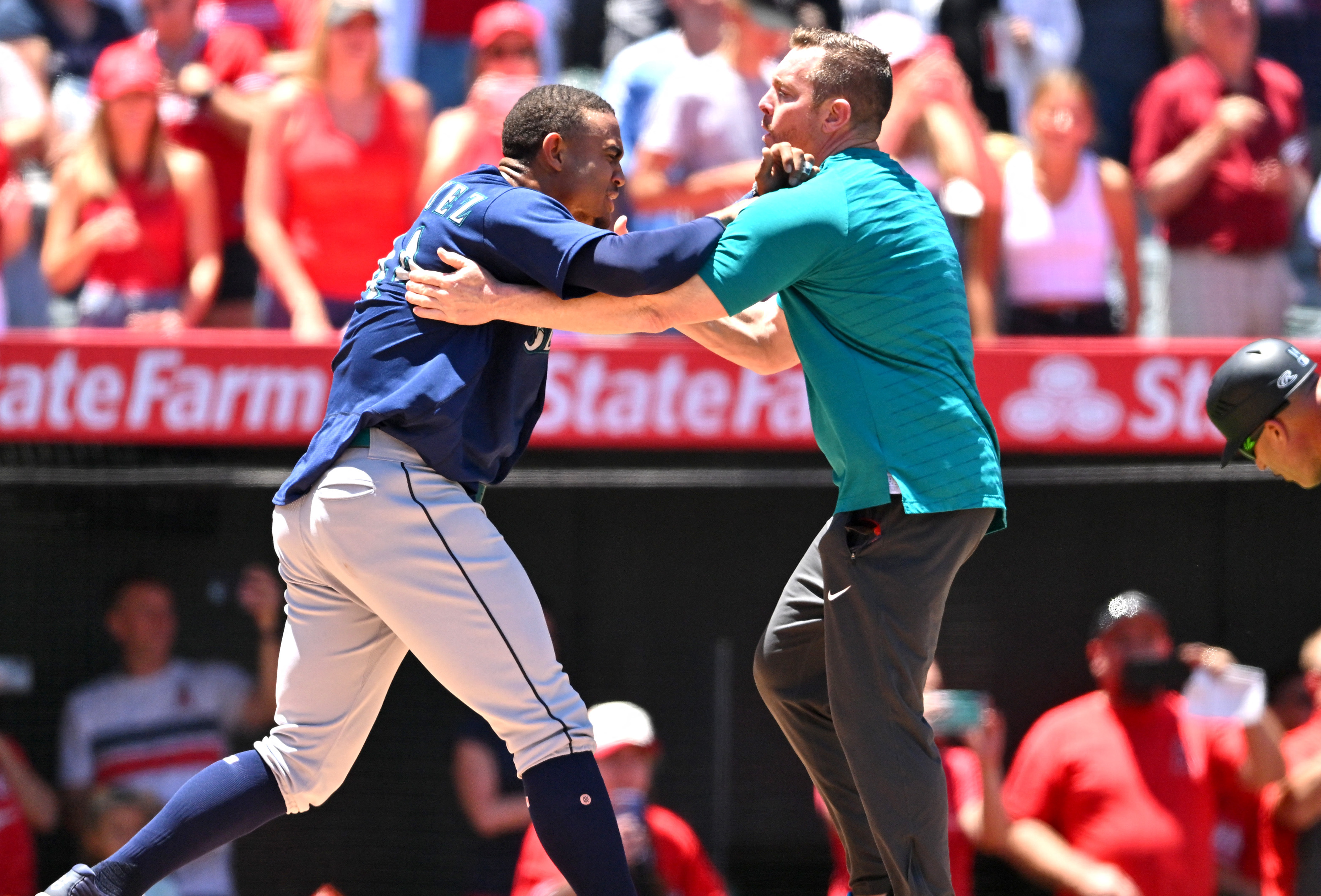 Tensions had been rising over the weekend after a number of players had been struck by inside pitches.

Jesse Winker was at the plate for Seattle at the top of the second innings and got struck hard by a 91mph fast-ball from Andrew Wantz.

It followed a 96mph fizzer which had nearly hit three-time MVP Mike Trout on the head during the side's previous MLB clash on Saturday.

Winker – enraged by the pitch – headed straight for the Angels bench after the umpires failed to reprimand Wantz.

He began pointing and shouting at opposing players and staff, before all hell broke loose on the field.

Benches and bullpens emptied as players and coaches from both sides piled in for an all-out brawl.

Punches were thrown, with the madness going on for nearly FOUR crazy minutes in LA.

In all, the game was halted for eighteen minutes as the officials tried to restore order.

Once the fight was over, they gave their verdicts on who could stay in the game.

'I APOLOGIZE FOR FLIPPING FANS OFF'

While for the Angels, pitching trio Wantz, Raisel Iglesias and Ryan Tepera got handed early showers.

And management pair Phil Nevin and Seattle's Scott Servais were also told to leave the field for their part in the crazy brawl.

Iglesias was seen screaming in the direction of the umpires after the initial fracas had died down.

And the Angels star bizarrely threw everything he could find in their direction – including sunflower seeds and chewing gum.

While Winker was accused of making an obscene gesture to the stands on his way out of the game.

Rodriguez stuns in thong bikini on yacht as Ronaldo snorkels

He apologized for the gesture in the aftermath of the match, which the Mariners lost 2-1, but not for his role in the brawl.

Winker said: "The only thing I'm gonna apologize for is flipping the fans off. That's it.

"They pay their hard-earned money to come and see a game, and they didn't deserve that, so I apologize to the fans, especially the women and children."

Social media was abuzz after the fight, with Mariners fans sticking behind their team.

And one even ordered the ejected Winker a PIZZA to enjoy from the changing rooms.

They wrote: "Just ordered a pizza for Jesse Winker from [Mountain Mikes] Pizza in Anaheim. You deserve it big guy."

Hours after the game, he responded to the fan on Instagram.

Winker wrote: "Sofie I got the pizza. Thank you.

"I appreciate it a lot!" 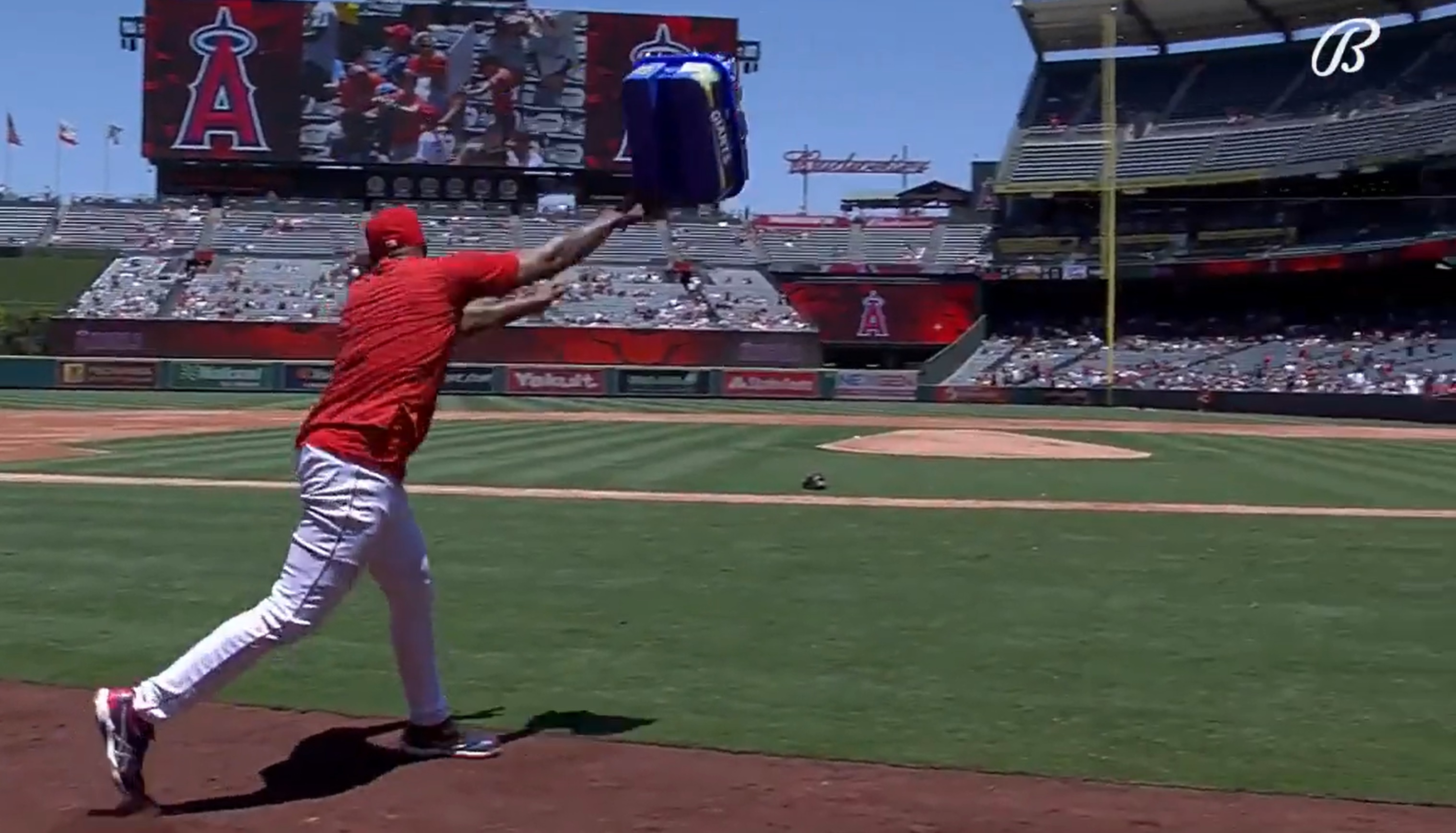