Who to buy and sell in the great sports stock exchange

Friends, it’s that time of year.

Footy’s done, cricket hasn’t started, there are no majors of any description going on, no games or world championships on the immediate horizon, which means things have suddenly gone quiet … maybe a little too quiet. 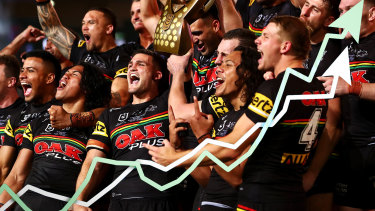 The Panthers have reached the top of the mountain. Can their stock rise any further?Credit:Getty, digitally altered

Therefore, it must be time for our annual share-price guide to sports and sportspeople!

Redcliffe Dolphins. 30 cents. A great speccie buy. The second Brisbane NRL team is not yet locked in, but they seem to be viewed as the most likely ones to get the nod and once that happens they will be too important to fail. They may count on NRL and business largesse to support them through, as well as that of the News Limited sugar-daddies so as to have a team that will double the TV pull in the Brisbane market. You may not make a fortune, but you can’t lose – so long as they are indeed the chosen ones.

The Clearys, Ivan and Nathan. $7.56. Yes, they are a blue-chip investment, but this is a sell. You will clean up. Yes, they both likely have great futures at Penrith, but that is not the question at hand. The question is, will there ever be a greater fever for the DNA duo than right now? They have got the team at the foot of the mountains to the top of the mountain in such extraordinary fashion – and against such long odds – that it surely can’t get much better. Yes, I can absolutely conceive that they will combine again to maybe get another couple of premierships, but everyone thinks that, and that is built into their current high share price. I am not saying they are over-priced at that astronomical sum, only that I can’t see it going a lot further up, but just one broken shoulder from Nathan, and the price would drop overnight to $4.50. Sell!

Greyhound racing. 3 cents. Sell. It is a poxy sport, which inevitably produces a lot of dead dogs and even if the current government continues to support them, and they make a profit, it is unethical to invest in them. You heard me.

Boxing. $1.20. As above, sell #FFS. Any sport where the greatest triumph is to inflict such brain damage on your opponent that he or she sinks into instant unconsciousness is not one to watch, let alone invest in.

Michael Slater. 12 cents. Buy. Yes, his share priced plummeted on Tuesday with the news that his contract with Channel Seven was not being renewed – purportedly because he had publicly criticised the PM, (God forbid) – but he’s still a great cricket commentator, highly regarded in the sub-continent and he won’t be your Uber driver any time soon (not that there’s anything wrong with that).

Women’s sport. $12.50. BUY. I told you last year, but you wouldn’t listen. Imagine if you had followed my advice, you’d now be rolling in it. Every year, pretty much across the board, their ratings and revenue rises and it is only to get stronger as the decade rolls on. The zeitgeist is female, and sportswomen will prosper accordingly.

Tim Paine. $6.32. Sell. Are you kidding me? You made a FORTUNE when you bought him for 15 cents a share just when he was the most unheard of cricketer we’d never heard of – just before he became Australian captain – and he’s now up over $6, and you still want more value out of him? He’s had a great run, and done a wonderful job, but the twilight is deepening. Sell, while he still has the prestige of the captaincy with him.

Joseph Suaalii. $2.15. Hold, I guess. He arrived in the NRL as the wunderkind that was such a genius he was going to revolutionise the way the game was played, so good they had to change the rules to let him in as 17-year-old – and made just about no impact with the Roosters, before being out injured. This is not to say he won’t indeed explode next year and turn into Brad Fittler sitting on the shoulders of Andrew Johns with Peter Sterling riding shotgun, so there is no need to sell now, which would see you locking in huge losses, after he was floated at $3.45 a few months ago. But watch him closely in the first few games next year, and get ready to unload.

AFL. $15. Buy. Always buy. They are the strongest blue chip in Australian sport, getting bigger every year, even if they do have the unfair advantage of slipping something into the water of all their supporters, which just turns them all a bit berko for the game, from the cradle to the grave.

Wallabies. $8.15. Buy. And buy big. Things are moving at last. They just notched up successive wins against the Boks, a side that beat the Lions beforehand, and the All Blacks last weekend, to restore them to the No.1 position in the world. They have some outstanding players with more on the way from overseas stints. In the lead-up to the 2023 World Cup in France, there is every reason to believe that our mob is going to get stronger still.

Ash Barty. $7.32. Buy. Despite having far and away the best season of her career – Wimbledon winner, anyone? – there is still a feel about her that she has barely broken into stride.

Nick Kyrgios. $3.56. Sell. Sorry about that. I know I told you to buy last year, and you have done your dough. Look, the good thing is he has clearly matured and is more comfortable in his own skin. He is a likeable bloke. But he seems to have turned his focus purely to playing entertaining tennis, rather than winning. That’s his call, and good luck to him. I’d still sell down.

Ok, that’s it for another year. Happy investing!