14 Actors Over 90 Still Making a Mark in Hollywood, From Mel Brooks to Betty White (Photos)

Some stars show no signs of slowing down 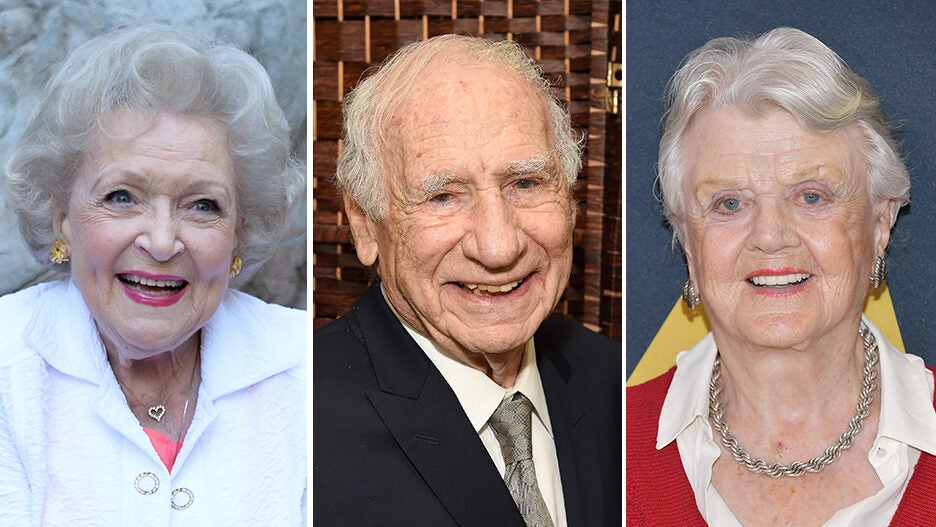 Some stars — from Mel Brooks to Betty White — show no signs of slowing down as they approach their 100th birthdays.

Betty White (born 1922) The Emmy-winning star of “The Mary Tyler Moore Show” and “Golden Girls” had another sitcom hit in her 90s with “Hot in Cleveland.” She also voiced a character in 2019’s “Toy Story 4.”

Dick Van Dyke (born 1925) The Emmy-winning star of the ’60s sitcom “The Dick Van Dyke Show” also broke out on the big screen in films like 1964’s “Mary Poppins” and 1968’s “Chitty Chitty Bang Bang.” But he’s had a resurgence in this century with roles in the “Night at the Museum” series, Showtime’s “Kidding” and 2018’s “Mary Poppins Returns.”

Angela Lansbury (born 1925) A three-time Oscar nominee for films like “Gaslight” and “The Manchurian Candidate,” Lansbury earned fame on TV as well, particularly the long-running mystery “Murder She Wrote.” A six-time Tony winner for her work on Broadway, she has continued working in projects like 2018’s “Mary Poppins Returns.”

Mel Brooks (born 1926) The EGOT winner and comedy legend has kept working into his 90s, with roles in films like 2018’s “Hotel Transylvania 3” and 2019’s “Toy Story 4.” He’s also been working on a stage musical adaptation of his 1974 comedy Western “Blazing Saddles.”

Estelle Parsons (born 1927) Parsons won an Oscar for 1967’s “Bonnie and Clyde” and she’s kept working on both stage and screen well into her 90s, appearing in shows like “The Good Wife,” “Grace and Frankie” and “The Conners.”

June Squibb (born 1929)  The actress made her Broadway debut in the original 1959 production of the musical “Gypsy” — but enjoyed a late-career surge with an Oscar-nominated turn in her 80s with the 2013 film “Nebraska.” She has worked steadily in film and TV ever since, including roles in 2020’s “Palm Springs” and 2021’s “Palmer” with Justin Timberlake.

Bob Newhart (born 1929) The standup comic became a sitcom legend with three shows that bore his name. And he’s made appearances in shows like “The Big Bang Theory” (finally winning his first Emmy in 2013) as well as “The Librarians” and “Young Sheldon.”

Lois Smith (1930)  The actress, who made her film debut opposite James Dean in 1955’s “East of Eden,” has kept up a steady pace in later years on both stage and screen. She earned widespread acclaim for the 2017 indie “Marjorie Prime” as well as more recent roles in 2020’s “Tesla” and Wes Anderson’s 2021 film “The French Dispatch.” She also picked up a Tony nomination in 2020 for her role in “The Inheritance.”

Marla Gibbs (born 1931) The five-time Emmy nominee who first broke out in sitcoms like “The Jeffersons” and “227,” has kept up acting with appearances on shows like “black-ish,” “Young Sheldon” and “Days of Our Lives.”

Robert Duvall (born 1931)  The actor, who broke out as the misunderstood recluse Boo Radley in the 1962 classic “To Kill a Mockingbird,” won an Oscar for the 1983 drama “Tender Mercies” — and earned six more nominations over the years. He has kept up a steady pace of onscreen performances, including 2018’s “Widows” and the 2021 indie drama “12 Mighty Orphans.”

William Shatner (born 1931)  The “Star Trek” star has continued working — and appearing at fan events — well into his career, including a starring role in the 2021 romance “Senior Moment” opposite Jean Smart.

Rita Moreno (born 1931) The EGOT winner, who won her Oscar for the original 1961 musical “West Side Story,” had a prominent role in Steven Spielberg’s 2021 remake. She also won praise as a feisty grandmother in the 2017-20 reboot of “One Day at a Time.”