As Martin Bean, vice-chancellor of RMIT, noted on Monday, the art deco Capitol Theatre on Swanston Street "has been saved from demolition many times".

Now, 20 years after it was bought by the university for use as a lecture theatre, five years after it was closed due to safety concerns, and two years after a campaign was launched to raise funds for its restoration, the magnificent 580-seat venue has been re-opened, minus the "Theatre" but with a promise to "retain its cinematic heritage and take a leap beyond". 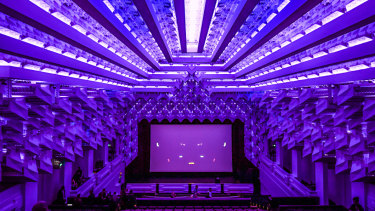 The interior of the Capitol, with its cave-like plaster ceiling picked out by LED lights.Credit:Joe Armao

The plaster ceiling, designed to evoke the crystalline interior of a cave, is intact, its every ridge now picked out by LED lights that can be synchronised to sound. The upstairs lounge areas – originally segregated, with women on the lower level and men in the upper "cigar" room – are framed by enormous pillars decorated with intricate glass mosaic panels.

During the works, a fragment of the cinema's original carpet was found in a cupboard; it was likely the first time anyone had paid it much attention in more than 80 years.

"The carpet was replaced only five years into the building's use, so almost nobody will remember the original colour scheme," said Malatt. "We had it remade by Brintons, a company in Port Melbourne, using thread sampling."

The building will be used by RMIT as a teaching facility, with the digital projectors capable of screening content direct from state-of-the-art studios on the main campus further up Swanston Street. But it will also play host to public events, such as a retrospective of Agnès Varda films to be presented later this month. The Melbourne International Film Festival will use the cinema throughout August, while ACMI will use it until its own renovation works are completed in 12 months' time.

"No longer just a theatre," said Bean, the new Capitol is destined to be "a place of education by day and culture by night".