8 clues, hints and questions after Part 6 of Emmerdale's survival week 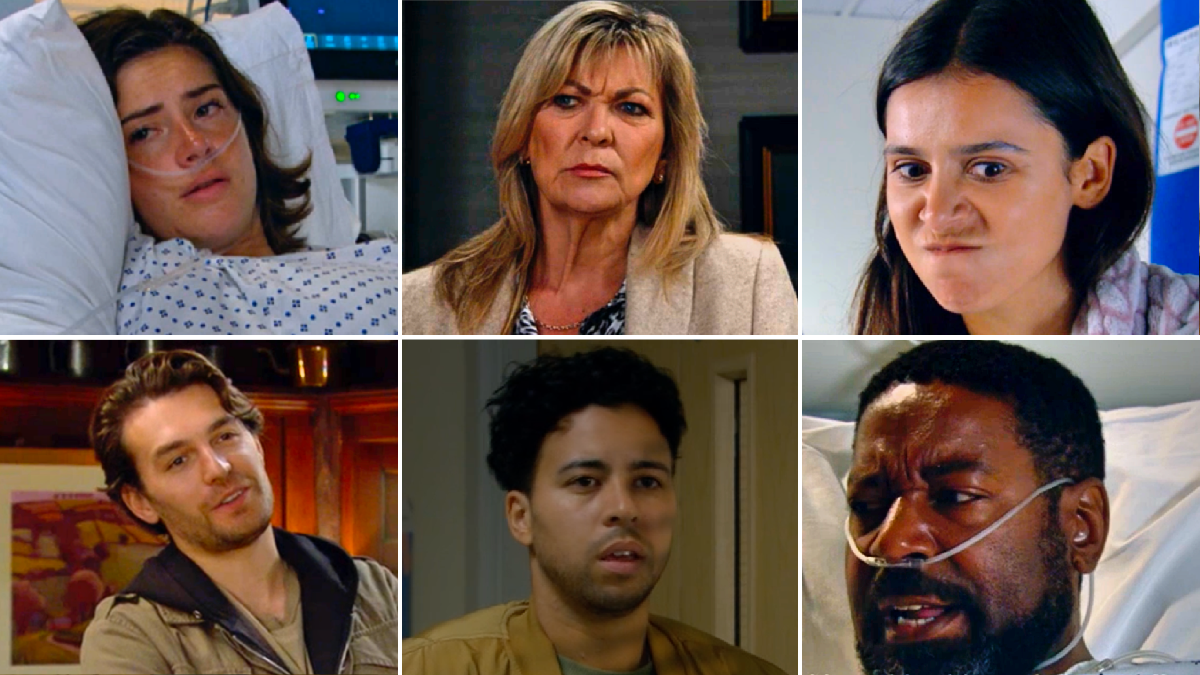 After an explosive series of episodes, Emmerdale’s survival week culminated with an incredibly emotional outing, dealing with the aftermath of the shocking events, before delivering one final jaw-dropping twist in the process!

Did you see it coming? We certainly did not.

Picking up from where the previous instalment left off, Friday’s (October 22) edition of the ITV soap saw Meena Jutla (Paige Sandhu) playing the hero in the wake of the blaze, claiming that she entered the maze in the hopes of rescuing anyone who might be in danger.

The biggest development was, of course, the confirmation that Andrea Tate (Anna Nightingale) had tragically died. News of her untimely demise sent shockwaves through the eponymous village, leaving many a resident shocked and saddened.

There was a lot going on – including THAT twist at the end – so, we at Metro.co.uk are taking a dive back into the final outing of survival week for a closer look.

Care to join us one final time?

Every episode this week commenced with a monologue from Meena. While it first appeared as though she was simply narrating the events of each instalment, it soon became apparent that she was actually speaking to someone.

But who? well, that was the question.

We pondered the notion of maybe a police officer, who she would be speaking to in the wake of the survival event, and Friday’s edition of the serial drama ultimately confirmed this theory. Kind of.

The killer’s introductory monologues were actually snippets of her police statement, which she had expertly rehearsed in the mirror, feigning all the necessary emotion in order to make it convincing.

Without stating the obvious, Friday’s outing of the soap confirmed that Andrea had died in the maze, with Kim having to identify her body.

As we noted following last night’s episode, Andrea was a character full of potential, one that had so much left to give. She certainly had a memorable exit, but the show will no doubt miss both her and actress Anna Nightingale, who went out with a powerhouse performance.

Millie has lost both her parents. Well, sort of.

Andrea’s death means that Millie has lost both of her parents. We think.

Jamie, as viewers will know, is presumed dead, after his car drove into a lake last month. Of course, fans reckon that he is still alive given that his body was never recovered from the scene, and as soap law dictates: without a body, there’s always hope!

If Jamie does prove to be alive, will word of Andrea’s untimely demise bring him back to the village?

If he really is dead, then Andrea’s demise has made Millie an orphan in a matter of weeks.

Will Kim be implicated in Andrea’s fate?

It’s no secret that Kim and Andrea despised one another, but their feud reached new heights last week, when the former attempted to apply for sole custody of Millie for absolutely no reason whatsoever other than because she could.

In fact, things got so heated between the two that Andrea took out a restraining order on former mother-in-law Kim, desperate to keep her away from both her and Millie.

With Andrea dead, one can’t help but wonder if Kim will find herself in trouble with the law? It’s also important to note that not only was Andrea left to die on Kim’s land, but her ordeal also took place during an event which was organised by the HOP, a business Kim owns.

With Millie having ended up in Kim’s care, she essentially got what she wanted. How will this look in the eyes of the law though? Not good, we imagine!

Victoria woke in the hospital following her ordeal, much to David’s delight. Diane was also present, and she took it upon herself to break the sad news of Andrea’s passing.

David confirmed that Meena was also injured in the fire, and – despite everything – Vic insisted that he pay her a visit, claiming that Meena hasn’t done anything wrong.

Oh if only you knew, Victoria!

An ironic statement for sure, considering this is ALL Meena’s fault.

The survival challenge saw Manpreet and Charles confess their feelings for one another, and – while they agreed that they could not be together – they found themselves on very good terms with one another.

Andrea’s death, however, appears to have ruined that connection already, with Charles claiming that this is exactly what Manpreet wanted. Will he come to realise that this isn’t the truth?

He will no doubt be riddled with guilt that he spent Andrea’s final moments in the company of ex Manpreet, who Andrea suspected he had feelings for.

But will he and Manpreet ever be able to get back on the same page? Whether that page be romantic or otherwise?

Will Ellis face repercussions for the atrocity that was the survival challenge?

Ellis Chapman spent much of Friday’s offering worried about Priya Kotecha in the wake of the blaze, but he couldn’t shake the guilt, believing this disaster to have been his fault.

Al implied the same, and asked if his son could be in trouble as a result. It’s a good question, given the amount of accidents that transpired during the challenge.

Could this come back on Ellis?

Just when you think you’ve seen it all, Emmerdale pull the rug out from underneath us with another SPECTACULAR twist.

Meena’s attempts to drown Victoria have been caught on camera! If you recall back to Monday’s (October 18) outing of the ITV soap, Ben Tucker lost his helmet camera while in the river.

It turns out that said camera was later recovered after it had gone downstream, and it picked up footage of Meena holding Vic’s head under the water. Ben, however, has yet to realise what he has in his possession, but could this be the key to exposing Meena as the twisted killer that she is?

‘You had a very lucky escape’, Ben told Meena during Thursday’s second offering. ‘I always do,’ she replied, evidently referring to her past kills.

But maybe not, after all. Ben unknowingly has a metaphorical loaded gun in his possession.

The question now is: when will the shot be fired?