Whether you watched his films and television shows or are simply familiar with his kicky red hat, it’s hard to imagine anyone who doesn’t know the name of famed oceanographer Jacques Cousteau. The Frenchman brought the living world of the oceans into people’s homes and was an early celebrity voice emphasizing the horrors of climate change. But it’s often easy to assume Cousteau lived his entire life underwater — and that’s where director Liz Garbus hopes to tell a new story with “Becoming Cousteau.”

For many, Cousteau is just the name of a man associated with the oceans, and it’s easy to see the possibility that a splashy outing from a prominent documentarian will do much to bring the man back to prominence. Garbus deftly handles the more educational elements of his life — including the creation of the Aqualung and Cousteau’s discussion of changes in the ocean — with the story of what made him a celebrity. A news segment within the doc notes that, at one point, Cousteau is right there alongside the President of the United States as the person other people most want to meet. To think that an oceanographer had all the power of a modern-day celebrity!

Garbus takes the standard documentary route of examining Cousteau’s life from birth to death, and while individual elements of his life are compelling in the first half, the documentary seems to come alive more towards its second half. Maybe that’s because Cousteau was just doing so much toward the latter half of his career, but the pacing seems to feel livelier the closer things get to the end.

Cousteau’s connection to the sea stems from tragedy, care of a devastating car accident that almost killed him. It was after laying in a pool of his own blood and thinking about the very nature of life itself that he found solace in the undersea world below. Cousteau became so enamored with the water that he teamed up with a group of free divers and became determined to see how long a person could stay under. These early 1930s trips ultimately led to some outstanding underwater cinematography that, at times, looks hand-tinted. Seeing a purple stingray glide under the water, and knowing the material is nearly a century old, gives everything a beautiful, eerie quality.

Cousteau’s development of the Aqualung and attempt to craft an underwater city lead to some tragedies, but Garbus and crew never stay mired in that for long. Really, the tone of the documentary is remarkably upbeat, even when the oceanographer’s beloved son, Phillipe dies. Cousteau’s own writings about his intimate and immediate feelings — read by actor Vincent Cassel — appear throughout, but it’s easy to assume that the aim of “Becoming Cousteau” is to inspire, as opposed to really diving deeply into the intricacies of its central figure. Still, when you’re being shown some beautiful sections from Cousteau’s films, like 1956’s “The Silent World,” it’s easy to forget what’s not being shown. 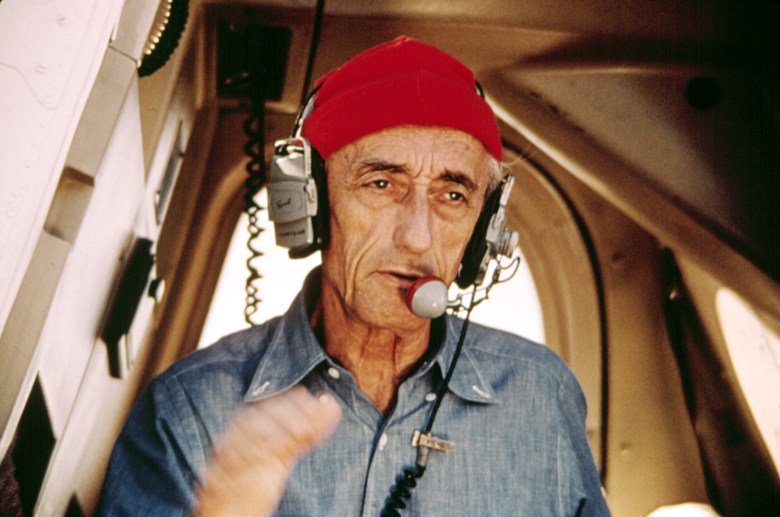 That being said, why are Cousteau’s features not available to watch anywhere? If anything, Garbus’ feature will make you want to seek them out. Cousteau always considered himself a filmmaker, and watching snippets from his work does a lot toward intensifying his feelings towards the sea. It’s not unlike watching Walt Disney’s “True Life Adventure” documentaries. (Considering this is a National Geographic project, maybe we’ll see Cousteau’s films end up on the streaming site.)

The undersea adventure of Cousteau’s life is only half the story, and who the man was as a person is equally fascinating. As he says in one interview, he is filled with flaws and many of them came in the form of being a husband and father. His first wife, Simone, is equally as fascinating as Cousteau himself. She, too, was drawn to the sea, even when she was dying from cancer. But because both husband and wife were in love with their work, they struggled to raise their two sons, both of whom spent significant time in boarding schools. It’s bittersweet to hear about Cousteau’s son’s death and then watch him spend time with the two young children he had with his second wife, Francine.

The third component to Garbus’ feature is Cousteau’s conservation activities. We’ve seen this story told several times — most recently in Greta Thunberg’s documentary “I Am Greta” — but Garbus illustrates how Cousteau was one of the earliest activists, bent on explaining to the world how and why the oceans were being destroyed. It started with widespread pollution, including Cousteau seeing a Hungarian freighter filled with toxic chemicals sinking into the ocean, its cargo threatening to cause widespread destruction. Even Cousteau himself admits his own failings as a conservationist, discussing how in “The Silent World” his crew killed a shark on-camera. Instead of illustrating clear-cut solutions to the problem, Garbus shows how one person can change their ways by seeing the devastation firsthand.

“Becoming Cousteau” is a dazzling dive into the depths of an undersea world. And while the story of Cousteau’s life is matter-of-factly handled, and with an eye toward optimism, he remains a towering figure worthy of deep consideration. Now when can we watch “Voyage to the Edge of the World”?

“Becoming Cousteau” premiered at the 2021 Telluride Film Festival. NatGeo will release the film on October 22.