'Chicago Fire': Time for Casey & Brett to Go All in With Romance?

Spoiler alert! Do not proceed if you have not watched Wednesday’s episode of Chicago Fire.

Things took an unexpected turn on Chicago Fire when Matthew Casey was given vital information from the unlikeliest source.

Prepared to do the chivalrous thing and let it be known to Sylvie Brett’s beau, fellow firefighter Greg Grainger, that he’s stepping out of the romantic picture for good, Grainger revealed that it wasn’t his feelings he was worried about. It was Brett’s. During their tense conversation, Grainger shared that Brett was in love with Casey, knocking the Firehouse 51 captain back on his heels.

As Chicago Fire showrunner Derek Haas explains it, that moment is meant to force Casey — newly recovered from his head injury — to make some finite decisions about Brett and their continuing slow-burn of a relationship.

“You can tell him that it’s one thing to have these thoughts inside your own head and be wondering how other people are thinking. And then to hear it from somebody who’s been dating her that, ‘Hey, guess what, buddy? She’s in love with you,’ is like water being thrown in your face,” Haas tells ET. “Casey went over there thinking he was going to do this chivalric gesture of, ‘Hey, man. Just so you know, you’re a great guy and I’m taking a step back.’ And Grainger’s like, ‘You don’t freaking get it, man. I don’t care what you think. It’s her. She’s in love with you.'”

“So to me, that’s going to be super eye-opening for Casey. He’s going to have to decide: Does he try to, at this point, let his feelings known again? Does he try to reconcile with or take her original advice and talk to Gabby? There are a lot of things still left in this season.” 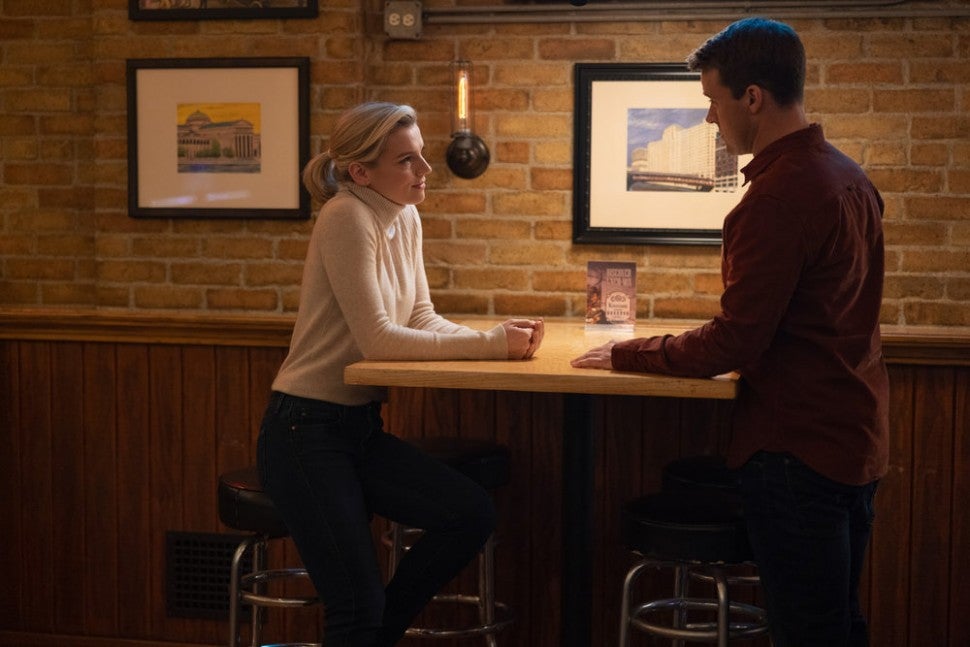 Whatever conclusion Casey comes to, it may not be pretty. For one thing, there’s the looming Gabby factor. “Still in his head is the fact that [Brett] said to him, ‘You need to get your act together vis-a-vi Gabby before and then you can get back to being the Matt Casey we all know and love,” Haas says. “She told him basically, ‘While that’s unresolved, I’m unavailable.’ There are those obstacles that are circling in the air and we’ve got three episodes to resolve them.”

With Gabby still orbiting Casey and Brett’s nonexistent relationship, is the possibility of a Monica Raymund — who appeared for a season 8 episode — return in the cards? “You’re going to have to wait and see. You’ll know in a month. All options are on the table,” Haas teases, skirting the question.

As Casey and Brett continue their back and forth, Haas acknowledges that there may be a ticking clock on how long their will they-won’t they can continue on in this state.

“It’s got to come organically from the characters, no matter who or what the relationship is. This one was super complicated because we as the audience watched six years of Casey and Gabby, Brett watched three years of Casey and Gabby. And so if we had gone too fast, it would have just seemed like we did not care about our show’s history. You can say a lot of things about Chicago Fire, but I feel like more than a ton of shows, we are invested in what had come before us,” Haas says. “Casey and Brett, we were just very conscious of the amount of history these two have crossed before we get them to consummate that. Is it time? I don’t know.”

Chicago Fire airs Wednesdays at 9 p.m. ET/PT on NBC. For more, watch below.

To stay up to date on breaking TV news, sign up for ET’s daily newsletter.