Crank up some Greene Daeye. We’ve got a Community movie to celebrate! 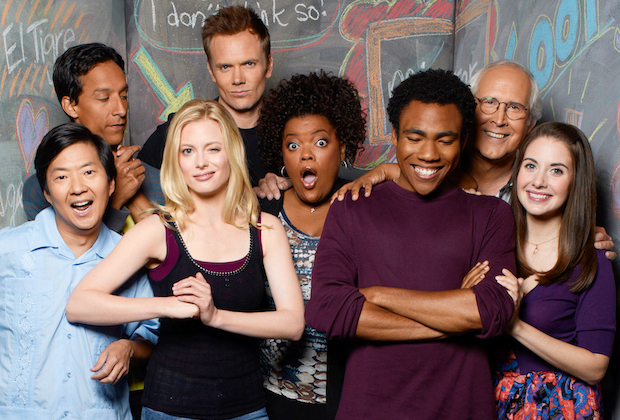 Pudi, who played Abed, posted the words “…AND A MOVIE” on Instagram. Even better, he marked his location as “Dreamatorium.”

Rash, best known for his role as Dalmatian-obsessed dean Craig Pelton, offered an enthusiastic (and appropriately pun-tastic) “Dean. F–king. Dong!” That was followed by a similar post from Brie (aka Annie), who wrote, “Let’s gooooo,” along with the hashtag #SixSeasonsAndAMovieOnPeacock.

As of press time, original cast members Yvette Nicole Brown (Shirley), Donald Glover (Troy) and Chevy Chase (Pierce) are not attached to the Community movie — but that didn’t stop Brown from acknowledging the announcement on Twitter. “Congrats, #Community fans!” she said. “You guys did this! ❤️ ”

And then there’s Gillian Anderson. After Joel McHale Britta’d his tweet and tagged the X Files star instead of Gillian Jacobs (who is not on social media), Anderson wrote back, saying: “Gillian Jacobs who? I’m in @JoelMcHale,” which we assume is a legally binding agreement.

Community the Movie plot details are being kept under wraps for now. Peacock’s press release only states that the movie derives “from the TV series that predicted its own movie,” making it “the least predictable movie of a TV series that referenced a lot of movies and TV.” It is slated to be released in 2023.