In 2020, as a pandemic raged around the world, audiences found comfort in the fractious love life of Marianne and Connell (Daisy Edgar-Jones and Paul Mescal, respectively). The adaptation of Sally Rooney’s novel, “Normal People,” captured audiences in the U.S., where the series debuted on Hulu, at a time where a story of two people weaving in and out of each other’s lives felt romantic and engaging.

Now, director Lenny Abrahamson, who beautifully rendered Rooney’s “Normal People” for the screen, has returned with another Rooney book. And no doubt it will play equally with an audience’s emotions. “Conversations with Friends” is the story of Frances (Alison Oliver) and her free-spirited friend, Bobbi (Sasha Lane). But their friendship is tested when they meet married couple Melissa and Nick (Jemima Kirke and Joe Alwyn, respectively).

Abrahamson talked with IndieWire via Zoom about adapting another Rooney novel, working with Alwyn, and how internalized characters can be their own challenge. Interview has been condensed and edited for clarity.

IndieWire: Why did you want to tell this particular story?

Lenny Abrahamson: The history of where it came from is relevant in this case, because I read “Conversations with Friends” around the time it came out. I loved it for all sorts of reasons, it connects to me in various ways. I grew up in Dublin. I went to that university. And as somebody really interested in the culture where I grew up and where I live, just seeing it through the eyes of this young artist like Sally, who has such an understanding of her generation was just fascinating to me.

It represents all these fabulous and important changes that have happened culturally here in the last 30 years. I love her writing, and it resonates with me in terms of how I like to go about making films and shooting stuff. It’s kind of low key and it hides its methods. It doesn’t announce itself as fancy writing, and yet the effect of it is this pared back, insightful prose. I would like to hope that the way I shoot is similar [in] that it looks like we’re straightforwardly showing you things, and telling you the story, and documenting in a way that people are doing what characters are doing. Cumulatively, it amounts to something more than that.

The company that I worked very closely with, Element Pictures in Dublin, they were thinking about it as a feature. I couldn’t quite see it as a feature, as much as I love the book. And then “Normal People” came. We read that together and went to the BBC, saying, “We’d love to option this book. What do you guys think?” So that happened, very quickly went to Sally and she was very keen, and we did it. It was in doing that that unlocked what to do [with] “Conversations with Friends” in a funny way. We all went back and said, “Actually, the way to do this is the same as we’ve done with ‘Normal People.’ It suits Sally’s writing and gives us the screen time you need to really dig in and not rush. Pull an audience in with a subtle style of filmmaking.” 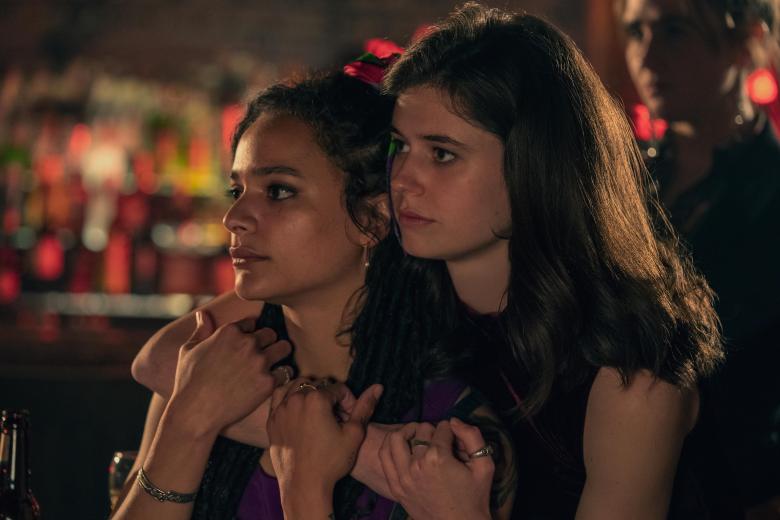 Was there a conscious desire to avoid making this look or feel similar to “Normal People”?

It’s always taking the lead from the story, from the material itself. They are very different characters, the situation is different, even structurally. You have a very straight-forward, one-way structure for “Normal People.” It’s a love story. It’s a separating and coming together pattern which we all recognize is not very different to what’s going on in “Conversations with Friends” where everything is complex and you’re looking at a bunch of relationships, a whole series of possible permutations between these four characters with Francis at the center of it. It’s a coming of age story, really, and it pushed us very organically towards an even more boldly pared back style. It’s a little bit cold, or certainly the whole thing feels gnarlier, I think.

As we went deeply into the project, we did make one big decision in the lead up, which was to shoot on film rather than digital. There’s just a[n] effortless quality to the image when you shoot on film. It feels less worked than digital. It’s brilliant at handling a big range of contrast. So you realize it means that you can be looser in how you shoot. It pushed us in a certain direction. It’s several films ago that I shot on film. What you end up with is a kind of cousin to “Normal People.” It’s still the same core creative team on the filmmaking side. It’s still Sally’s book. There are natural and appropriate similarities but I don’t think it feels like we’re repeating ourselves.

Yes. I worked again, with Suzie Lavelle, who’s amazing, and there’s also Leon Whelan, who did an amazing job on the second block. And Bobby Shore is a great cinematographer. I suppose they were, to some extent, working within a shape that we’d set up, but also bringing their own creativity to it. The point of view, Susie and I were trying to do that for lots of technical reasons. We shot wider lenses on “Normal People” and also a lot of close ups, but those close ups were right beside the characters.

Whereas here, we forced ourselves into a slightly austere kind of mood by working with longer lenses, or what effectively are longer lenses because of the format. We use the same set of lenses, but they operate as if they were longer so it means that it’s harder to get back wide. It put a really interesting set of constraints on us as filmmakers within spaces. So we weren’t doing big establishing shots, it just changed the grammar slightly. That meant that you could be a little physically further away, the camera could be a little physically further away. It’s very hard to describe why it’s different, but it is. It feels to me like the way one experiences real places and real people is in a series of snaps or slices. I felt like this would force us into deciding what we were looking at and why.

Did the pandemic have any bearing on that?

Oh, you have no idea what it was like! The funny thing about it was the only time we could ever be in close proximity was when we were filming. Shooting under COVID restrictions is such an odd experience because you separate after the day and then you come together and, even on set, it’s all masks and everything except for the actors when we’re shooting. To limit the actual physical proximity to each other on set was such a novelty in the middle of the pandemic. Shooting the sex scenes, it suited our format, mid-shots of two people worked really beautifully and that’s the territory we’re in, close again, on the faces. There’s only a certain story you can tell about bodies during sex. It’s still always about what’s happening to the people emotionally, you need to feel the intensity of it but all of the depth and interest is there.

Joe Alwyn is a huge deal now considering his personal life. Can you talk about casting and working with him?

I’d seen Joe in “The Favourite.” He’s amazing and funny. Because “The Souvenir 2” is another Element Picture film, I saw him in that and I thought he was beautiful. So I knew him as an actor. It sounds crazy, but I’m not really on Twitter. I was kind of hoping [Elon] Musk would buy it so that I’d have an excuse to delete it. Obviously I knew that they [Alwyn and Taylor Swift] were together. One of the main producers on this is a huge fan of Joe, so it was a no brainer if Joe was willing to read it. There’s something very soulful about Joe as a person. He is really introspective. He’s exceptionally kind, as a person. There’s just something gorgeous about him, as a person, and that goes into the acting. He can do uncertainty brilliantly and he can do vulnerability brilliantly.

We all felt was very important that Nick wasn’t some sort of asshole, basically. That he wasn’t self centered the way Bobbi sees him at the beginning, which is kind of nothing much going on, but beautiful. On the other hand, he has to be withdrawn enough that we believe Bobbi thinks that, but when we get close to him and Frances we have to see something else. And Joe was just able to do that; he was able to do both those things. He’s an absolute pleasure to work with. I became very close to him. I think everybody did. So I hope people see how great he is in this because I think he is really great.

“Conversations with Friends” is streaming now on Hulu.