Coronation Street viewers have seen Leanne Battersby (played by Jane Danson) dragged into Simon Barlow’s (Alex Bain) drug drama recently and this week she will come face to face with drug lord Harvey (Will Mellor). Official soap spoilers have already revealed Leanne will do some dealing herself but later this month, the situation turns around and she will find herself talking to the police. Will she turn against Harvey in a bid to help the authorities bring him down? But at what consequence will this come?

Next week, Simon thanks his stepmother for getting Harvey off his back and promises he’ll never get mixed up with anyone like that again.

Leanne, on the other hand, daren’t tell him the truth.

Elsewhere, Leanne is upset to discover Nick Tilsley’s (Ben Price) still living at his ex-Natasha’s but when he asserts that he’d rather be at home and she’s the one stopping him, Leanne is unable to argue with him.

She is then interrupted by Harvey who has texted her about the next job she needs to do and Leanne asks Nick if she can borrow his car.

Later, when she is sitting in his car, she is counting the cash when a police officer knocks on the window asking to talk to her. 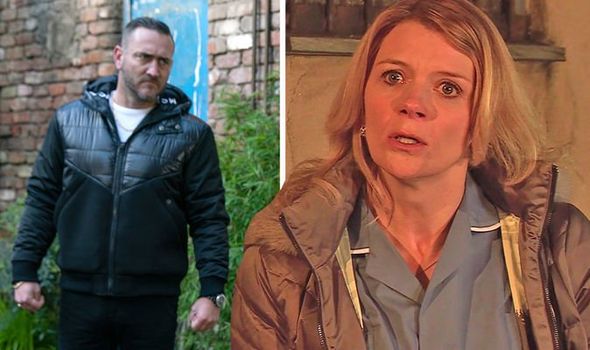 He explains there’s been a spate of car thefts in the area and is wondering if she knows anything about it, Leanne breathes a sigh of relief that he doesn’t ask about the stack of notes in her hand.

When she returns to the flat, she quickly stashes her burner phone and nurse’s uniform before ringing Harvey to tell him she doesn’t want to work for him anymore.

But he has other plans and tells her that because she’s such a success, he’s moving her onto bigger, more important deals.

And from her window, Leanne despairs as she watches Nick, Natasha and Sam, looking to all intents the perfect family.

Harvey then drops off more drugs with Leanne and orders her to put on her nurse’s uniform and get out to work and earn him some cash.

And as the pair leave, Toyah Battersby (Georgia Taylor) spots then and presumes Leanne is having an affair behind Nick’s back. 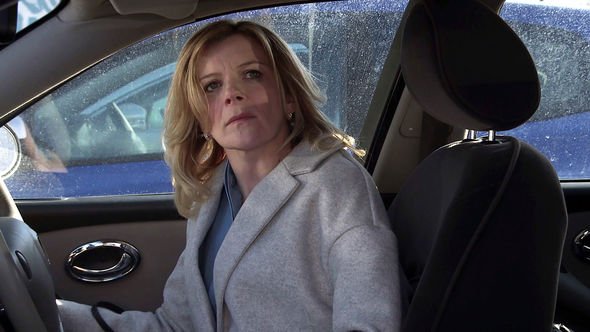 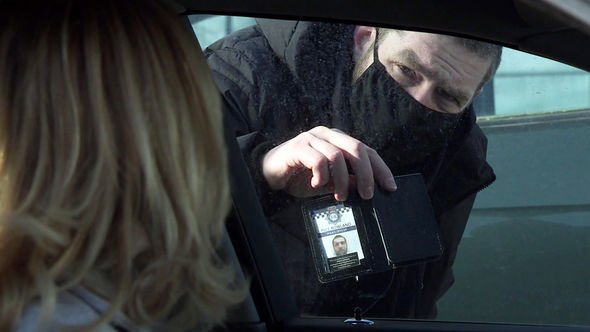 Having made the drop, Leanne heads home in her nurse’s uniform, but when a woman approaches her and asks her to help a man who’s just collapsed at the tram station, Leanne is left horrified.

By the time she returns home, she is emotionally drained, and there is a knock on the door – it’s Harvey with another job.

When she refuses, an argument ensues, but they are interrupted by Nick who is demanded answers after Toyah told him she saw Leanne with another man.

Leanne is forced to hide Harvey in Oliver’s bedroom but when Nick spots his jacket his suspicions are confirmed.

Realising she needs to change her situation, Leanne goes to the police station and reports Harvey for his drugs operation, only to find herself arrested. 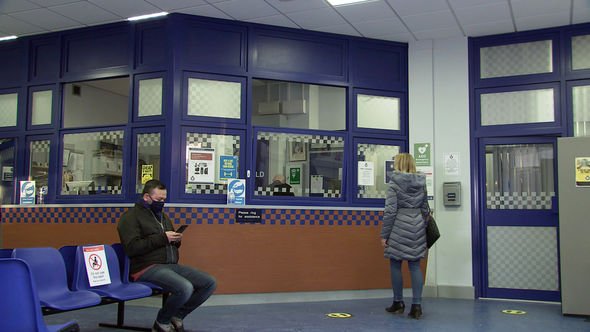 Leanne fears she’s made a terrible mistake and when Simon returns home, he finds no sign of Leanne and tells Nick she’s gone missing.

As the police interview Leanne she covers for Simon, making out he was never involved in any drugs deliveries and she only got involved to protect him.

The officer tells Leanne they’ve been watching Harvey, are aware he grooms young lads and they need her help to nail him.

When she is finally released, Leanne lies to Harvey and says she didn’t have the time to deliver her drugs, he then urges her to get on with it – threatening Simon’s life in the process.

With her nurse’s uniform on, Leanne heads out and without realising, Simon is following her.

As she waits nervously for the drug dealer on the street comer, Simon appears and she implores him to go home.

Will Simon and Leanne find themselves in danger should Harvey arrive to check up on Leanne?

Express.co.uk spoke to the actor who plays newcomer Harvey about this storyline and why his character has targeted Simon and Leanne.

“This is a seasoned baddie who people can recognise; he’s a street guy who’s turning vulnerable people into drug dealers because they’re not on the police radar,” Will explained.

“And it’s the lowest of the low for me, to do that to an innocent person and then to pressurise them into doing things that they don’t want to do with bully tactics.

“There’s an arrogance that comes with this character [Harvey], as well that he can’t be touched.”

As for how it is playing such character, Will said: “There’s loads of different levels to how you play this character.

“I don’t want to be too stereotypical but at the same time you want to be realistic, so I’m very conscious and I’m a perfectionist, I want it to be right.

“However, people look at soaps, I’m just trying to make as believable as I can. And as real as I can so people don’t see me as Will Mellor, they see the character and that’s what matters to me,” he added.