Former Challenge competitor Dee Nguyen has officially returned to social media after being dismissed from the popular reality series. The War of the Worlds 2 winner was fired from the show this past June following controversial remarks she made online about Black Lives Matter.

Following the firing, she reportedly was able to get some help from a friend and fellow Challenge competitor.

Now, five months after MTV’s The Challenge fired her, she’s made her return online with an announcement for her fans about what’s going on.

Dee Nguyen posts on social after five months away

On Tuesday evening, former Challenge competitor Dee Nguyen surprised everyone by sharing an Instagram post to her 116,000 followers on the social media platform.

She shared a smiling selfie, as she wore a dark green bikini top, sunglasses, and a Los Angeles Dodgers baseball cap.

“I found my zen. The last few months off has been a blessing for my health. I’ve taken time off to be introspective and I’ve been working on something big. 👀A big shoutout to all my fans for still sticking by me,” Dee wrote on her photo’s caption. 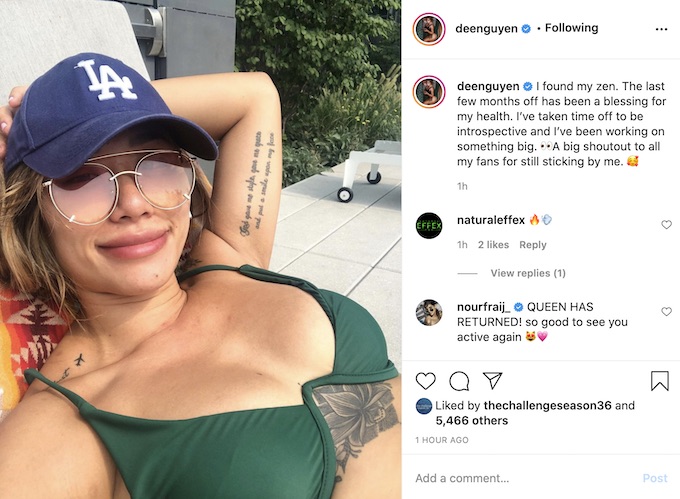 She also put the new IG photo above onto her Instagram Stories but simply wrote “Hi” on it to let people know she’s returned.

It marks Dee’s first post on the Instagram platform since June 7. Her share back then was also a selfie, but of herself posing as she lay on her side in front of a window with buildings outside. That post was her saying she wanted to spend time chasing the rest of the days of summer.

Dee’s post above has gained about 5,500 likes, and over 400 comments so far. That includes a mixture of what one would expect. Some fans were excited and seemed happy about her return while others posted puking emojis or told her to “stay logged off.”

Dee fired for controversial remarks, got help from a friend

Dee Nguyen first appeared on MTV’s War of the Worlds season in 2019 and then returned for War of the Worlds 2. She’d go on to be part of the winning team in that season’s final, which was Team UK. It also included her hookup during the season, Rogan O’Connor, as well as Jordan Wiseley, and Chris “CT” Tamburello.

She’d return yet again for Season 35, Total Madness, and looked to once again be a force in the game. One of the early bits of drama involved Dee and rookie Jenn Lee, due to Rogan flirting with Jenn.

As the season was going on, Dee made controversial comments on social media in early June about her support of Black Lives Matter.

“IDK why some of you think I’m anti-BLM. I’ve been saying that since the day I lost my virginity,” she said in a since-deleted tweet, per People.

Due to the remarks, Dee was fired from MTV’s The Challenge as the Total Madness season was still airing with her on it. MTV’s Challenge Twitter issued a statement on June 8 to let fans know they’d “severed ties” with Dee, but would continue to air the season’s episodes as planned.

The show went on, with Dee still on it, but she was edited out heavily. Dee could be seen in the background, or very briefly in some parts, but had very little dialogue or interaction with other cast members shown. She was eliminated by Jenny West in a Hall Brawl game on Episode 15 of the season.

“I am sorry for the insensitive tweet I posted earlier. I was being defensive and not speaking from my heart. But there’s no excuse,” Dee wrote. “I also want to extend an apology to Bayleigh and Swaggy- who are my cast mates and deserve my respect and compassion.”

In another apology she issued after that, she said she would be “stepping away” from social media to focus on her well-being and mental health.

Shortly after the news of Dee’s controversy and firing, her friend and fellow Challenge competitor, Wes Bergmann stepped in to help Dee find mental health help. At that time, Dee had been living with Wes and his wife in Missouri during the coronavirus pandemic.

In a lengthy June 9 Twitter post, Wes said he’d helped Dee to find what they were calling a “mental health lodge” because her mental health had been deteriorating to a point she couldn’t be by herself in a hotel.

Five months later, it seems that Dee has now had a good bit of time to be “introspective” with all that has happened. While she isn’t part of MTV’s The Challenge, it seems she has taken an important step in bettering herself.

Now fans will wait to see what’s next for Dee on social, including her big announcement in the future.

The Challenge is currently on hiatus on MTV.