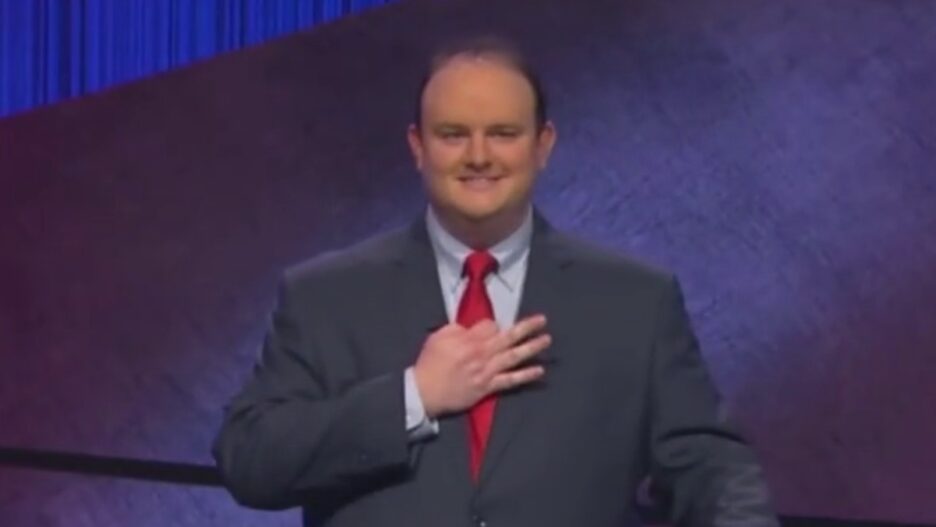 More than 200 former “Jeopardy!” contestants on Wednesday posted an open letter to the syndicated game show over a hand gesture used by returning champion Kelly Donohue on Tuesday’s show that has been widely condemned as a symbol of white supremacy.

At the beginning of the show, two-time champ Kelly Donohue made an “OK” sign with his hand, touching his forefinger to his thumb, and holding it to his chest. In recent years, the same gesture has been co-opted by hate groups, particularly white supremacists. The Anti-Defamation League classified the gesture as an official symbol of hate in 2019.

The gesture sparked wide debate on social media as former contestants decried the gesture and called on show producers to address the issue.

“Regardless of his stated intent, the gesture is a racist dog whistle,” the letter states. “Some of the first people to notice this were not affiliated with ‘Jeopardy!’ in any way — they were viewers who couldn’t believe what they’d seen, captured it on video, and shared it to Twitter. Among them were people of color who, needless to say, are attuned to racist messaging and not appreciative that the show allowed this symbol to be broadcast.”

The letter went on to note that, when similar situations have occurred in the past, the production team on the show has corrected things before the episode aired. “On more than one occasion, contestants have made gestures during their introductions that were seen as undesirable for broadcast and were asked by the production team to reshoot the footage without the gesture,” the letter said. “A couple of years ago, a contestant unintentionally wagered a monetary amount that used numerical values coopted by white supremacist groups and, since the total didn’t affect the outcome of the game, ‘Jeopardy!’ digitally altered the numbers in the version that aired. This should have been done in this case.”

Reps for “Jeopardy!” were not immediately respond to requests for comment.

The contestants’ open letter also called out Donohue for a misstep in Monday’s episode, in which he responded to a clue with a term for the Roma people that is now considered a slur. Now, the former contestants want direct action, asking “Jeopardy!” to issue “a statement and a disavowal of both of this week’s events, and we would like to see ‘Jeopardy!’ address Kelly’s behavior.”

In a now-deleted post to his Facebook page, Donohue wrote, “That’s a 3. No more. No less.” Donohue, who will not be appearing in Wednesday’s episode, has since made his social media account private.

While some viewers took issue with Donohue’s gesture, others believe he was simply holding up the number three, as a reference to Tuesday being his third time on the show. As one “Jeopardy” fan pointed out on Twitter, Donohue held up the number two on Monday, and just one finger last Friday.