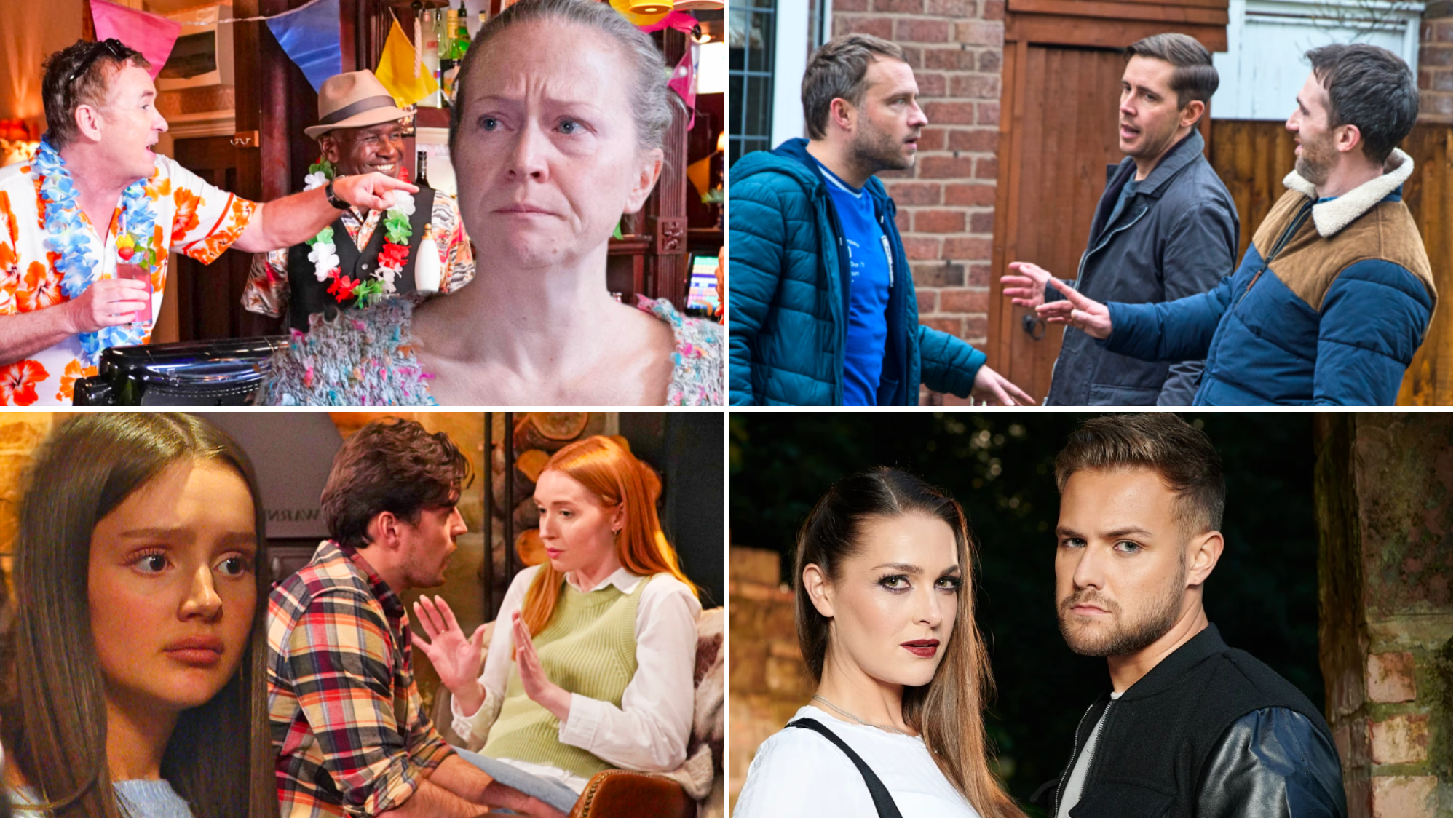 Huge comebacks and shocking demises are at the heart of the nation’s favourite soaps next week, with a number of surprises on the cards for good measure!

EastEnders sees Linda Carter make her highly-anticipated comeback following Mick’s vanishing at sea, and she’s less than pleased to make a discovery upon setting foot back in Walford.

All we’ll say is, watch out Alfie Moon!

Over in Coronation Street, three lives are on the line, with Stephen Reid out for blood in a bid to cover his own tracks, while two other residents face death after a shocking turn of events.

We can confirm that it absolutely is, and if you’d like a more detailed look at what’s to come, we’ve got all the spoilers and pictures that you could possibly need.

Alfie decides to re-open the Vic for Linda, swiping the keys from Denise, who is horrified to discover the pub full of customers. Kim, meanwhile, tells Sharon that the Vic has been re-opened, so Sharon makes a phone call to Linda, who subsequently returns, accusing Alfie and her fellow neighbours of not caring that Mick is dead. Alfie, determined to make things right, gathers Mick’s friends to surprise Linda with a vigil for her lost lover. But things take a turn when the police show up.

Desperate Martin begs Stacey to support him in talking Lily into having an abortion, but she refuses. Having spoken to oblivious Whitney about motherhood, Lily comes home and says she’s made a decision.

Zack is rattled during the tasting at Walford East and, after cutting his hand, he storms out, realising he needs to face up to things. After a conversation with Martin, he steels himself to take responsibility.

Teddy’s memories come flooding back and he remembers information about his showdown with Stephen, much to Stephen’s horror. Conflict ensues, with Teddy later cornering Stephen in the factory, revealing that he reckons the killer is behind Leo’s death. Stephen retaliates, hitting Teddy over the head, claiming another victim.

Mike opens the door to the nursery to find Summer unconscious. Esther calls an ambulance, while Mike gives a false name to the hospital, but Aggie informs Billy and Paul about the developments and they subsequently arrive, demanding answers. Mike later stops by the hospital again, and Paul and Todd confront him about it at his home, with Paul lashing out, attacking Mike, who hits his head. Is he dead?

Hope is devastated when the tape featuring John’s voice unspools, but Tyrone comes to the rescue, unaware of what the tape is. When he and Fiz press play, they’re horrified to hear the killer’s voice.

Desperate to get rid of Chloe, Mackenzie pays for the deposit on a flat, hoping she will leave his home. Chloe, however, is not too pleased and an argument ensues, with Sarah witnessing some of it from afar. Suspicions piqued, Sarah asks Chloe is Mack is the dad, but Chloe covers her tracks well, before telling Mackenzie to pull himself together, remarking how Sarah almost worked out the truth.

Gabby’s idea about expanding the businesses to schools goes down a storm with local councillors, including Nicola, and she subsequently celebrates with a drink, before trying to kiss Nicky. Nicky pulls away, but Dawn witnesses the awkward exchange. Spiteful Gabby later calls Dawn a ‘prostitute’ in front of Lucas and Clemmie, leaving her in tears.

Mandy suggests throwing a Dingle party with the out-of-date beer, which Chas reckons is the perfect opportunity for her to make amends with everyone, as she crashes the event. Paddy subsequently arrives, and he’s understandably hurt to see Chas starting to break the ice with her loved ones, leaving him feeling incredibly isolated from the extended family. Oh Paddy.

Sienna starts to sympathise with Warren’s health situation, but Ethan isn’t impressed, but after confronting his love rival, Ethan explains to girlfriend Sienna that he thinks Warren has changed, prompting her to tell her ex the truth about Norma being a match.

Prince and Hunter make a pact to stay away from girls – just as newcomer Rayne turns up on a motorbike!

Lacey arrives to the village for a job interview with James at Dee Valley Law. She admits how passionate she is about the job and wanting to help people, but she doesn’t feel confident about her chances when James is far from enthusiastic.