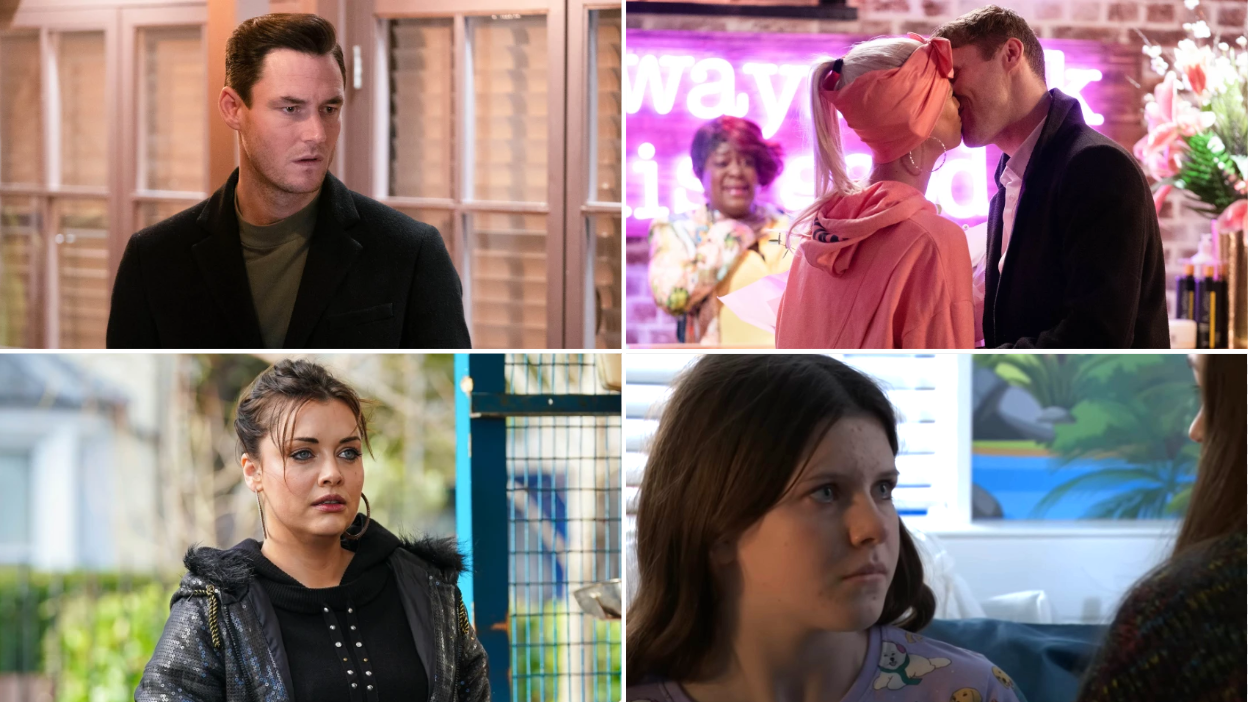 EastEnders has thrown some huge and dramatic curveballs at us recently and next week is no different.

Pregnant 12-year-old Lily Slater (Lillian Turner) continues to battle with her pregnancy turmoil, and when she overhears a hard conversation between Stacey (Lacey Turner) and Jean (Gillian Wright), things get even worse.

We are still all reeling from the unexpected reveal with Lily, but there’s another to come as a big secret is exposed which threatens to destroy Zack Hudson (James Farrar).

Triggered by the arrival of an old friend Brett, Zack finds his life turned upside down – but what is going on?

Elsewhere, when Denise Fox (Diane Parish) fails to reignite the spark with oblivious Jack Branning (Scott Maslen), will she be tempted when Ravi Gulati (Aaron Thiara) starts sniffing around?

Here’s what you can expect in next week’s episodes.

Zack checks with Whitney that she’s happy for him to take the cruise ship job, and, thinking it’s what he wants, she tells him to go for it. Later, Chelsea collars him and tells him Whit doesn’t want him to leave.

He’s angry at being pressured by Chelsea as he’s only taking the job to make lots of money to support the baby, but he cools down and later turns down the opportunity.

Whitney’s thrilled, but Zack’s happiness is short-lived when he spots old acquaintance Brett…

Ricky Jnr argues with Jack and accuses him of only being interested in Amy and her dramas. Ricky tries to find out if Sam has said anything about moving to Germany with him.

Zack is on a mission to convince Ravi to give him the Head Chef role and a pay rise at Walford East. Whitney acts as his cheerleader, but things go horribly wrong as Zack spots Brett and gets rattled by his presence.

Meanwhile, Sharon interviews Brett for a PT job at Crunch Time, only for Zack to warn her off employing him.

During a heated confrontation later, Zack tries to scare Brett into leaving Walford but Brett drops a bombshell that turns Zack’s world upside down.

Denise is desperate to put the spark back into her marriage and gets a makeover from Lola on her first day back. Ravi is impressed when glammed up Denise arrives to book a table for two at Walford East.

After packing the kids off to the cinema, Denise welcomes Jack home, and he suggests they make the most of a kid-free house.

Zack is in total denial. Sharon’s concerned to see Brett hanging about, but Zack promises he’s changed his ways.

Whitney is pleased to hear Zack has convinced Ravi to give him a second chance but is worried by his lack of enthusiasm about the ultrasound.

Broken Zack later goes to the club to drown his sorrows and ends up in a drunken row with Whitney. continues to drink and in a fit of rage and fear smashes a glass, cutting his hand, and breaking down

Jack is in the doghouse with Denise, so he offers to take her out for the day. Amy invites Denzel to the empty house but is furious when he shows up with Nugget, who has swiped a bottle of vodka from Suki’s shop.

Ravi is humiliated when Suki and Nish confront him about Nugget’s theft and being too soft, so he heads to No.27. When he arrives, the boys are drunk, and Ricky Jnr is throwing up.

Ravi lays down the law and is cleaning things up when Jack and Denise arrive. Livid Jack lashes out at everyone, including Denise. Ravi goes to see the Panesar’s to pay them back, and Denise shows up to thank him. Denise’s praise of Ravi silences critical Nish and Suki.

Stacey heads to work and rants at Eve about the Panesar’s putting their rent up. Things get worse when the bap van breaks down, and Stacey worries at the expense.

Later, Lily overhears Stacey telling Jean that she’s not sure how they’ll get through this.

Lola is sick of Jay and Billy fussing over her going back to work. She says wants to enjoy good stuff while she can, which gives Jay an idea.

Ravi thanks Denise for having his back, and they bond over the perils of parenting. Denzel decides to bunk off with Amy so he can talk to her and he begs her to get help.

When the adults hear they’ve skipped school, there’s a row which ends with Amy accusing Denise of not caring about her. Jack’s anguished and snaps at Denise.

Denise is furious and heads to Peggy’s alone. Ravi spots her drowning her sorrows and lends her a shoulder to cry on. After a flirty evening, Ravi goes in for a kiss on the walk home.

Sharon knows something is wrong with Zack and tells him she’s here for him whenever he’s ready to talk.

Chelsea isn’t buying Zack’s change of heart over the baby and is determined to talk sense into him. Zack is alone in the Walford East kitchen when he has an accident and he breaks down and sobs.

It’s Jean’s 60th birthday, and she bans Stacey from throwing a party – they can’t afford it. Harvey accompanies her to work and then hits on an idea to solve the Slaters’ money problems.

Lola invites the family for a meal, where Billy, Ben and Callum brace themselves for a terrible update. Jay and Lola take great delight in announcing their plans.