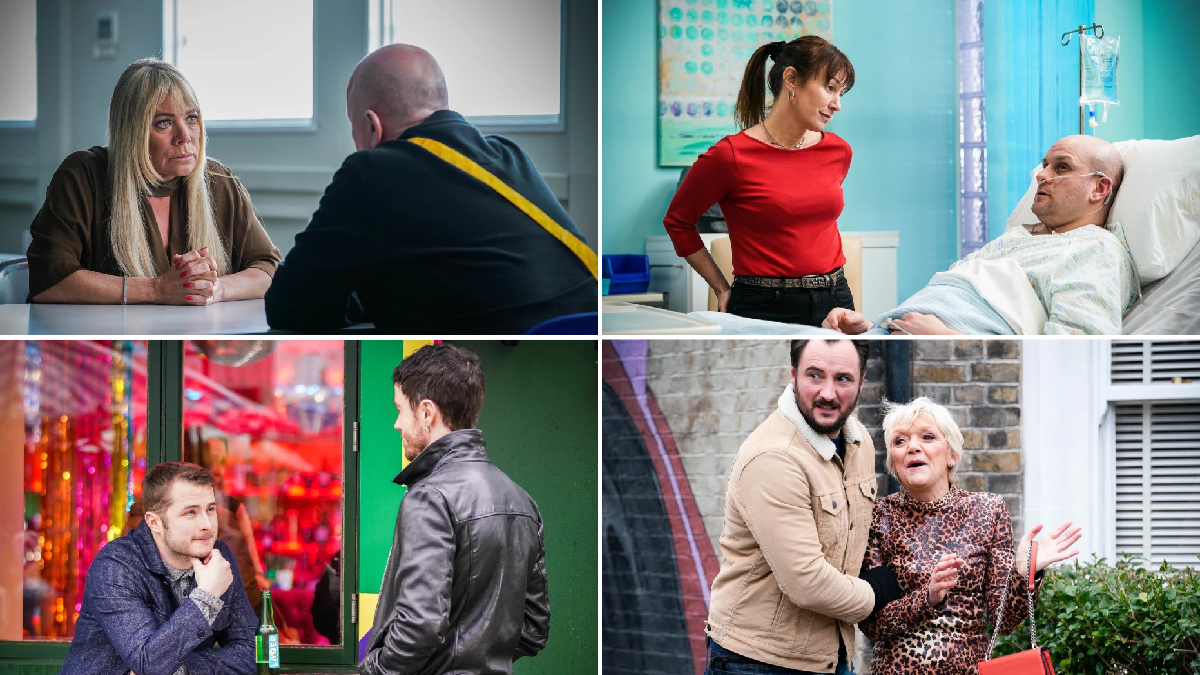 There are tense showdowns and major decisions made in a tense week of EastEnders drama.

Stuart Highway (Ricky Champ) has his cancer surgery but struggles in the aftermath, while Sharon Watts (Letitia Dean) takes matters into her own hands.

Its going to another eventful week in the Square!

If you’d like to know all there is to know about next week’s goings-on, then you’ve come to the right place.

Jean tumbles out of a limo after a night out. Martin takes her back to Sharon’s and she talks about her night out with a stag do. Stacey arrives and informs Jean that she’s got a doctor’s appointment this Friday, but a furious Jean storms off. Harvey, meanwhile, insists it’s the end of their relationship, but his attention is soon elsewhere when Neil gets in his taxi and aggressively makes a threat he can’t ignore.

Neil threatens Harvey but is stopped by an oblivious Jean who wants to clear the air. Outside, Jean notices the groom from the stag do getting married and he lets her catch the bouquet, awkwardly trying to get rid of her. Happier than ever, Jean surprises Harvey and proposes.

Linda is surprised to see Nancy at Sharon’s, after she spends the night with Zack. Nancy makes it clear she wants nothing to do with Linda, but she soon discovers bottles of alcohol in her suitcase as well as a photo of the family. Feeling guilty, she goes to talk to Linda and offers her an olive branch. It’s the day of Stuart’s surgery but when he spots Linda sneaking alcohol into a drink, he confides in Rainie about his fears of being addicted to painkillers.

Ben struggles to hide his concerns when Callum reveals that work want him to be the face of a new campaign at work aimed at the LGBTQ+ community. When Kathy’s new bar manager, Lewis, supports the idea, Ben gives Callum his blessing. Callum, however, picks up on Ben’s unease about the campaign. Ben is later left shaken by a loud noise at the club, still struggling following Callum’s attack.

Harvey is on edge following his encounter with Neil and after an incident in the Square, Dana picks up on his odd mood. Back at the flat, Rocky questions what Dana is hiding.

Despite Rocky promising not to tell Harvey, he can’t help himself and mimes information to Harvey so he can guess what’s going on. Jean, meanwhile, excitedly tells Shirley she’s proposed to Harvey but he’s still thinking about it. Shirley talks to Harvey and asks him what he’s waiting for.

Stuart is out of surgery, and he claims that he’s in no pain, but after difficulty trying to reach Roland, Vi realises that he is struggling.

Ben takes matters into his own hands and meddles with Callum’s campaign offer, telling them he doesn’t want to take part. Callum is furious when he learns what Ben has done and as tension builds, Ben reveals he’s terrified that Callum will be attacked again.

Vinny offers Bernie her job back but Karen advises her she should rest instead. After turning down Rainie’s offer to see Roland, Bernie gets some advice from Kim and tells Vinny she’ll return to work.

Martin shares his concerns with Zack about Linda staying at the house and drinking round the children but Nancy overhears.

Outside, Lewis invites Ben on a night out but a group of guys heckle Lewis who casually shrugs it off and leaves. Fuelled with anger, Ben goes to follow the men but Kim interrupts as his mum needs help at The Albert.

Ben spots the man, Steve, who hurled homophobic abuse at Lewis. Furious, he drags him into the gym’s alley and attacks him – but he is caught red handed by a stunned Sharon! Sharon covers for Ben, telling Callum she found the guy unconscious but she soon confronts Ben, telling him that he just can’t behave like this.

Nancy, meanwhile, spots Jean in Linda’s scarf and when Jean denies stealing it, Nancy relays her theory to Stacey. Stacey does her best to convince Harvey to get Jean to the doctors tomorrow and he eventually convinces her by telling her that it will get Stacey off her back.

Back at work, Bernie is happy to see her old friend Molly is there but she is shocked when she sees the new terms of her contract. Furious, she leads a walkout with the rest of the employees leaving Vinny stunned.

Dotty tries to convince Suki that Vinny is more than capable of managing the business.

Vinny tries to convince Bernie and the others to stop protesting but when Bernie spots Rainie, her heart breaks over Roland and she’s more defiant than ever. Vinny tells Dotty what’s happening and not wanting Suki to find out, Dotty steps in to help and threatens to fire Bernie. When her plan fails, Dotty returns with paperwork proving the contracts are legal. Bernie refuses to back down.

Kat and Martin reminisce on the anniversary of Kush’s death but Stacey is focused on Jean’s appointment at the doctors. At the appointment, Jean insists she’s fine.

Rocky is back in Kathy’s good books after chasing a man who steals her handbag and with Kim’s help, gets it back. Rocky asks if she could pay him back in the form of a date.

Sharon begs Kat to keep Ben away from Phil’s businesses, reiterating that he’s too fragile right now. Kat, however, doesn’t listen, and thus Sharon goes behind her back and visits Phil, telling him everything – and she suggests that he revisit DCI Keeble’s offer!