But Dean Andrews has revealed he could have joined the soap many years ago if it wasn’t for a failed audition where he put on a dodgy American accent.

The 55-year-old, who is from Rotherham, says that before he became an actor he was encouraged to go for a part in Emmerdale by pal Johnny Leeze, who played Ned Glover in the ’90s.

“We were playing golf one day and he said I should try out for the telly, so I wrote to Sue Jackson who was head of Emmerdale’s casting department.

“I got an audition for the part of a radio presenter but for some reason I did it all in an American accent. I was terrible, so good on Emmerdale for not giving me the role.”

He says: “In the run-up to appearing on the show I got messages every week saying: ‘We’ve sussed out who you’re going to be’. One person even said I was going to be Kim Tate’s son, which I took as a compliment seeing as me and Claire (King) are the same age!

“My daughters and fiancé were the only ones who knew.”

As a family man Dean says that he sees some surprising similarities between himself and Will.

“If he’s anything like me, he’s a tough fella but adores his children,” explains Dean.

“To get into the mindset of such a vengeful character I rely on the scriptwriters. I’ve probably been cast because I look a little bit evil-ish sometimes.

“I’ve never been in prison but I’ve seen documentaries. I’ve got a picture of how somebody like that might be.”

At the moment, Dean’s character is only interacting with Harriet and Dawn, as he is largely “keeping away from the village” in order to undertake his evil deeds.

“There’s lots that can be played out. Will could end up marrying Harriet, and I’d love to act in scenes with Cain Dingle (Jeff Hordley) as it would be pretty nice to have a tussle for a few months between the two hardmen of Emmerdale,” says Dean. 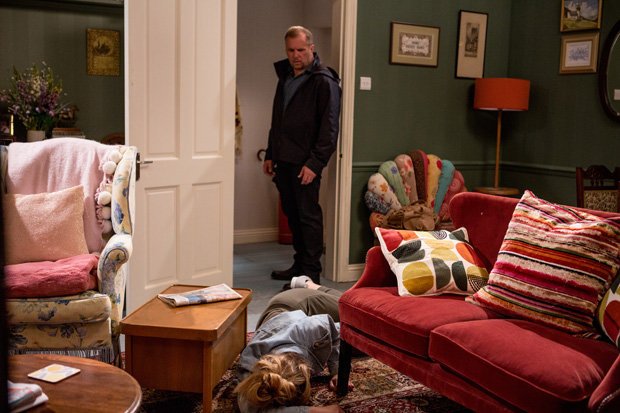 “However, being able to work so closely with Katherine and Olivia was a big part of my decision. They’re both very similar actors to myself, and similar to people I’ve worked with in the past – they’re real and gritty.”

However, Dean admits that he isn’t sure what happens in the scenes featuring just Harriet and Dawn as he actively avoids reading the scripts fully so he can develop his own character.

“I try not to know about other people’s stories and how they’ve reacted. I’ve always done that as an actor,” adds Dean.

“I don’t read the entire scripts. I don’t want to know what is going off between Dawn and Harriet in their little story, I just want to know how I feel in that moment in time.”

And Dean says that he hopes Will won’t be a flash-in-the-pan character.

“I would love to see Will go on to have 43 affairs and 12 kids,” he says, laughing. “I hope the character sticks around and gets some nice things to do.

“I’ll be in Emmerdale for as long as they’ll have me. Being from Yorkshire I always wanted to be a part of this and I love the show.”

● Emmerdale airs on weeknights at 7pm on ITV.