Emmerdale star Eden Taylor-Draper’s sister Francesca is ‘doing incredible’ after suffering from leukaemia, recalling the toll that her cancer treatment had on her physical and mental health.

Last year, Eden, 24, who has been on Emmerdale since 2005 as Belle Dingle, explained that she found out that her younger sister had been diagnosed with cancer while on set.

Francesca was diagnosed with acute lymphoblastic leukaemia just after turning 14 years old, for which she needed to undergo four rounds of chemotherapy.

On Tuesday’s edition of Lorraine, Lorraine Kelly was delighted to speak to the sisters over video chat, telling them that they looked ‘gorgeous’ as they giggled in response.

When asked by Lorraine how she’s doing, Francesca, who is now 17, shared that she is feeling very well.

‘I’m doing incredible, thank you so much,’ she said, before opening up about how shocked she and her whole family were by how fast her treatment began after her diagnosis. 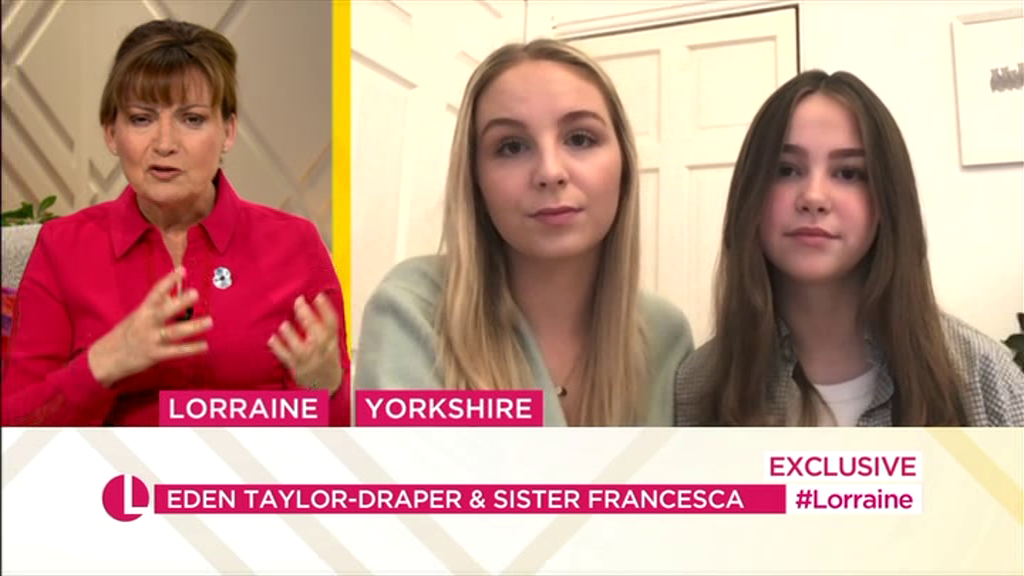 ‘It was a massive shock, I don’t think any of us were expecting it,’ she said.

‘The treatment started very fast, we didn’t really have a lot of time to process it. I’m doing really well now.’

While some of the symptoms she experienced were ‘generic’, such as lacking energy, she suffered ‘excruciating’ pain in her legs before finding out she had cancer.

Francesca stressed the ‘massive toll’ having cancer had on her mental health, outlining how at 14 years old, she ‘wanted to be independent’ just like other teenagers her age.

Eden recently became an ambassador for Teenage Cancer Trust, who are running a campaign using the hashtag #NotOK to help young people who are facing cancer to receive the mental health support that they need.

Explaining the importance of the campaign to Lorraine, Eden recalled how ‘supportive’ Emmerdale was when she took a month off from the soap to be there for her sister while she underwent intensive chemotherapy.