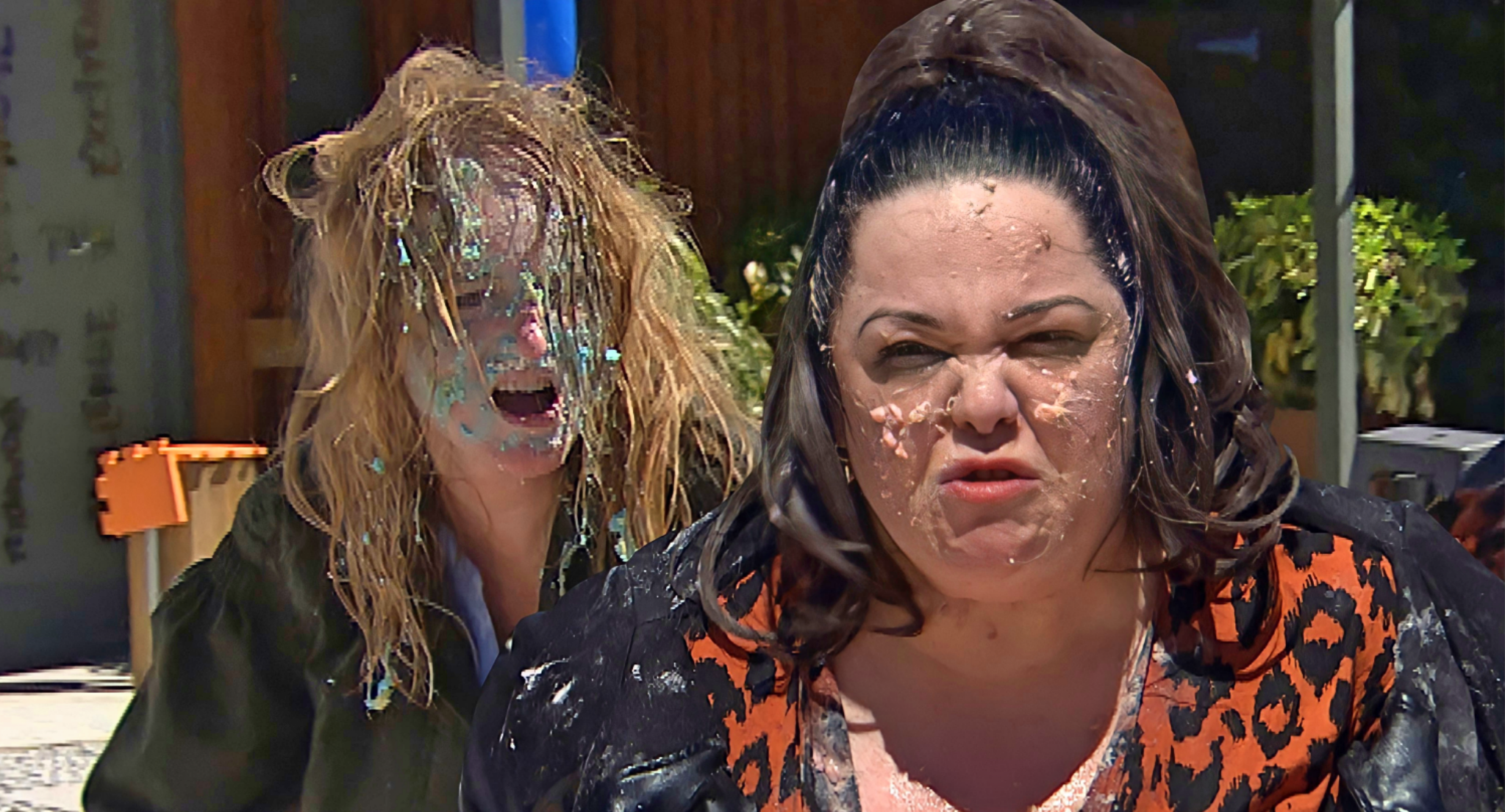 Sworn enemies Nicola King and Mandy Dingle go to war in Emmerdale next week, as they face off in a battle of epic proportion.

In scenes which actress Nicola Wheeler describes as ‘the most fun’ she’s ever had while filming a brawl, the two foes come face-to-face, and things get quite messy!

Battle lines were drawn earlier this month, after Nicola discovered that Jimmy (Nick Miles) had locked lips with Mandy on the second day of his trial.

Prior to this discovery, it was she who’d been holding the family together, desperate to salvage what was left of her marriage. But in the wake of Jimmy’s admission, Nicola changed her tune, instead declaring their marriage over.

The former power couple decided to hold off on telling the kids about the split until after Angelica’s birthday party, optimistic that they could give their children one perfect day before breaking the news.

‘Angelica’s party is probably the end of [Nicola and Jimmy’s] marriage,’ actress Nicola Wheeler told Metro.co.uk, ‘so I think Nicola is just very depressed and struggling to keep it under wraps.’

Yes, in spite of Nicola’s desire to protect the kids from heartbreak, her mouth gets her into bother once more, ruining the special day before it’s even begun!

The soap stalwart rants about Mandy’s mothering, having no clue that Mandy is nearby and has heard everything!

‘Mandy turns up and it’s like a red rag to a bull,’ said the star. ‘[Nicola] literally turns all of her attention on Mandy.

‘All of the angst and emotion that’s been building up over the last few months, she offloads it onto Mandy basically. She gets a thwack on the head, which is hilarious. A deserved thwack on the head I have to say, because she is vile about Mandy’s mothering.

‘When of course we all know it was Paul who was the bad parent, not Mandy. But that’s all she needed – one hit on the head and it’s “great, Wrestlemania let it begin!”

A brawl worthy of receiving top billing at Wrestlemania ensues, with both participants grabbing whatever it is they can get their hands on, in the hopes of out-doing their opponent.

‘They start whacking each other with these plastic things, poor Rodney gets hit, and then it turns into a water fight!,’ said Nicola. ‘Rodney and the barista get it in full throttle. And then the cake becomes involved! What a coincidence there happens to be two cakes, so obviously a face in each cake.

It’s not just the audience that will be laughing, as Mandy quite evidently enjoys rubbing Nicola’s face in the cake – that is, until Nicola retaliates, doing the same to her!

‘The cake happens, and we had two brilliant body doubles there as well on the day,’ added Lisa Riley, explaining how the fun scenes were filmed. ‘Steph, who was the stunt coordinator, she was quite shocked. She said: “Wow, you and Nicola, you’re up for this”.

‘Obviously Steph the choreographer said ideally we’d like the doubles to do it but I said: “No, I’m doing it. Look, if I can pick Robin Windsor up in Strictly, Nicola Wheeler is a pigeon”.

‘Literally I’ve got Nicola on my shoulders, we were spinning!’

Nicola told us: ‘This is definitely the most fun fight I’ve ever had on Emmerdale! ‘It was just brilliant. I was knackered the next day, we were saying we had to come in, we had more stuff to shoot.

‘And it was just like: “Oh god, I’m so tired!”, because you just literally spend a day being physical you know, we were like running around screaming shouting at each other and then laughing once they shouted cut, you know, so it’s like you’re in hysterics. But yeah, it was brilliant. Great fun.

‘The wig’s going to go flying!,’ added Lisa. ‘Mandy’s wig for that episode should get its own credits!

‘It was just fun and I think we had a ball and hopefully that’s what’s going to come across, the fun and the enjoyment that we had from doing it for a full day. The crew were so with us that the more they saw we were up for it.’

One to watch: Friday August 5 at 7pm on ITV.