FBI's Alana De La Garza Previews a Blast From Isobel's Past: 'This Case Weighs Heavy on Her Heart'

Special Agent in Charge Isobel Castille gets a blast (or two) from the past when CBS’ FBI resumes Season 5 this Tuesday at 8/7c.

In the episode “Second Life,” a young woman is abducted while out delivering pizzas. At first, the victim’s identity proves to be quite the puzzle, her name a fake. But then it becomes clear that she is the same person who, at age 4, figured into one of Isobel’s very first cases at the Bureau.

Thing is, that 4-year-old girl, Annabelle, was determined to have been killed. So as much a relief it is to learn she in fact is alive, Isobel is simultaneously devastated to know she and her former partner, Jake (played by guest star Tate Donovan), got it wrong all those years ago.

“Isobel is faced with the hard truth that Annabelle was alive and she stopped looking for her,” FBI cast member Alana De La Garza previews. “This weighs heavy on her heart, the idea that Annabelle has suffered, and what her family has gone through as a result.” 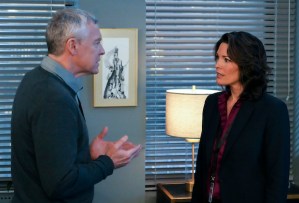 Further complicating the revisiting of this old case is Isobel’s reunion with Jake, who also still works for the FBI.

“Back in the day, Jake and Isobel were more than just partners in the FBI; they also were romantically involved,” De La Garza shares. “I imagine that it was a bit of an emotional roller coaster relationship, because Izzy is extremely cautious at the idea of revisiting it, or Jake, at all. Her reluctance in making the initial call to him is a reminder of that past connection.”

As Isobel and Jake revisit old leads and Jubal’s team delves into the manhunt, the tension gets ratcheted higher and higher — which is no strange territory for director Jon Cassar, who helmed nearly 60 episodes of Fox’s 24 (which he also exec-produced), and who previously directed the FBI episode that exposed Special Agent Maggie Bell to deadly sarin gas. 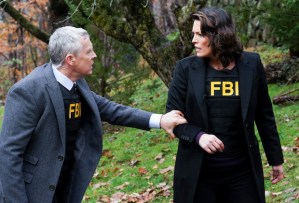 “Jon Cassar brings a lot of passion and movement to the shows he directs,” notes De La Garza. “Great directors make the day seem easy and Jon does not disappoint. He’s easygoing and has such great storytelling experience that it’s a pleasure the get to create with him.”

In fact, De La Garza under Cassar’s watch got to engage in a bit of on-screen derring-do, when in the episode’s final act, Isobel out in the field makes an impulsive, and dangerous, decision.

“I love that this episode explores a bit of Isobel’s history with the FBI and we get to see the active role she once had as an agent in the field, making decisions with her gut rather than a well-thought out plan,” says De La Garza. With Annabelle’s life once again on the line, “There literally is no time to waste.”

Want scoop on FBI, or for any other show? Email [email protected] and your question may be answered via Matt’s Inside Line.