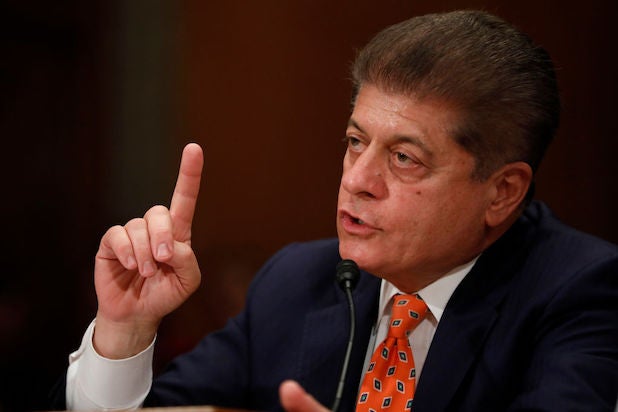 Fox News legal analyst Andrew Napolitano was accused of sexually assaulting a waiter, forcing him to participate in a “bizarre sex game” and attempting to rape him over the span of nearly three years, according to a lawsuit filed on Monday in New Jersey Superior Court.

According to the suit, Napolitano developed a “strong attraction” for James Kruzelnick when he was a waiter at a steakhouse in New Jersey and groped his buttocks from behind in the bathroom of the restaurant in Dec. 2014. After Kruzelnick told Napolitano that he was not interested in a sexual relationship, Napolitano continued to dine at the steakhouse, ask for Kruzelnick to be his waiter and make “sexually suggestive and inappropriate remarks,” the suit said.

According to the lawsuit, Napolitano invited Kruzelnick to visit his house in 2015, which is when Kruzelnick was forced to participate in a “bizarre sex game” that involved Napolitano asking Kruzelnick to spank him in a father-son roleplay as Napolitano masturbated.

“Before [Kruzelnick] could say anything, Napolitano said ‘I am really into certain things’ and ‘I want you to do something for me,’” the suit said. “[Kruzelnick] was repelled by Napolitano’s request and had no interest in playing this bizarre ‘sex game.’ But when [Kruzelnick] told Napolitano that he did not want to spank him, Napolitano shouted at him: ‘just f—ing do it!!’”

The suit goes on to say that Kruzelnick sought out Napolitano a few months later, hoping for legal advice after he began experiencing discrimination at work based on his sexual orientation.  It was then that Napolitano invited Kruzelnick back to his house under the guise of discussing his legal situation, according to the suit, but the legal analyst asked Kruzelnick to play the “sex game” again in exchange for his help.

The following year, Kruzelnick once again sought legal advice from Napolitano, this time regarding a criminal case Kruzelnick’s brother was in. After the three met up, Napolitano told Kruzelnick’s brother that “he would do everything in his power to help him, but only ‘if your brother gives me his full cooperation,’” which Kruzelnick understood to mean more sexual favors, the lawsuit said.

During one of their encounters from the spring of 2016 to the summer of 2017, Napolitano attempted to rape Kruzelnick when he was changing into his swimming suit, the suit said. After that incident, Kruzelnick never saw Napolitano again, according to the lawsuit.

Kruzelnick is seeking $15 million in damages. The lawsuit is the second filed against Napolitano this month that has accused the Fox News legal analyst of sexual assault, with the first — filed on Sept. 11 — accusing the former judge of forcing Charles Corbishley, a man whose case Napolitano was presiding over at the time, to perform oral sex on him in 1988.

Through his attorney, Tom Clare, Napolitano “unequivocally” denied the accusations.

“These allegations are total fiction,” Clare said in a statement sent to TheWrap. “This copycat lawsuit, filed and promoted publicly by the same lawyers representing career criminal Charles Corbishley, is nothing more than a pile-on attempt to smear Judge Napolitano for their own financial gain. We will defeat these false allegations in court and look forward to exposing this continuing attempt to abuse our court system to smear a highly-respected former public servant.”

A spokesperson for Fox News did not immediately respond to TheWrap’s request for comment.