In the wake of Aretha Franklin’s death in 2018, competing biopics on the Queen of Soul were announced: one coming to movie screens and the other making up the third season of National Geographic’s anthology series “Genius.” Both biopics were delayed by a year because of the global pandemic, and now “Genius: Aretha” is the first release to set the tone for our view of Franklin as a performer, a legend, and a woman.

The series starts with a grown Aretha (Cynthia Erivo) arriving at Muscle Shoals to work under acclaimed music producer Jerry Wexler (David Cross). She’s brought along her husband, Ted White (Malcolm Barrett) and almost immediately the dynamic between the pair is evident. It also introduces one of the more frustrating things about “Genius: Aretha”: It’s a biography told with a muddled chronology, and this storytelling technique is distracting and confounding.

In this first episode Aretha has already found some semblance of success, being crowned the Queen of Soul, only for the series to go back and forwards in time, both to Muscle Shoals and to introduce a younger Aretha, played by Shaian Jordan, who wants to perform in her father’s church. Creator Suzan Lori-Parks most recently wrote the script for “The United States vs. Billie Holiday,” and there are several commonalities between the structure of that feature and this series. Each subsequent episode of “Genius: Aretha” takes places in a different time period of Aretha’s life, leaving audiences to know the gaps based mostly on Erivo’s hairstyles.

It also leads to a lot of audience confusion as the series goes along; there are massive gaps of time missing that, short of being a Franklin scholar, you won’t know. If the goal is to introduce Franklin to a new legion of fans or showcase why she was so legendary, this does her a disservice.

The emphasis on Franklin’s accomplishments as a singer is there, but shown in a truncated and haphazard form. At one point Cross’ Wexler talks about the magic and the achievements Franklin broke through with songs like “Think” and, most importantly, “Respect.” Yet, for some reason, neither song is ever sung or mentioned until the near the completion of the season. Furthermore, because the series starts at Muscle Shoals, it implies Franklin’s accomplishments had already been cemented, but then why the need for Wexler at all?

What “Genius: Aretha” seems more interested in is Franklin’s family life and her desire to be an activist and producer on her music. Erivo is utterly spellbinding as Aretha Franklin but it’s difficult to say whether she’s great playing Franklin, specifically — or just great. The juxtaposition of Erivo, already a strong singer and performer, becomes synonymous with Franklin. The overarching theme seems to be Franklin was a musical maven who was continually torn between who she was expected to be and who she wanted to be. 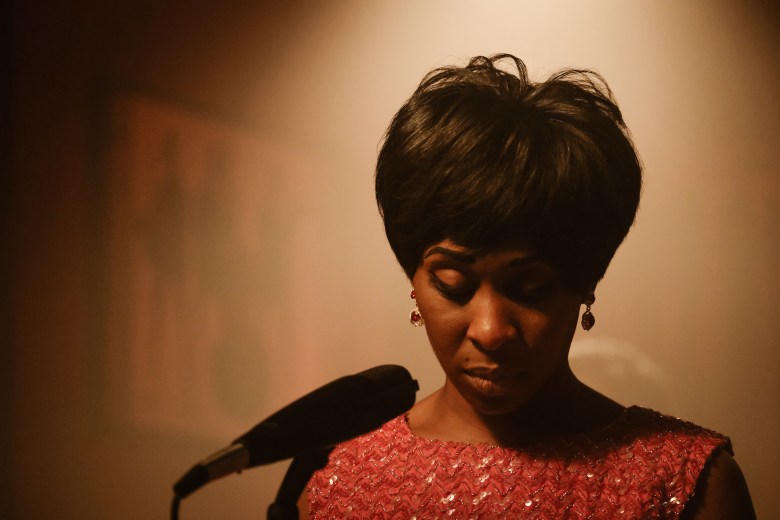 Erivo handles those two dichotomies perfectly. In her relationship with White, she wants to sell the belief that Aretha Franklin is living a fairytale, but when a disastrous “expose” ends up in Time magazine, Erivo illustrates Franklin’s disappointment at both her family and the media that would be so content to perpetuate stereotypes about her as a Black woman. (The series coming out in the wake of the Meghan Markle interview feels incredibly timely.) The back half of the season sees Franklin decide to eschew the fairytale image and become more of an activist, developing a bond with Martin Luther King, Jr. (Ethan Henry) and embarking on an album of protest songs. All of this is fascinating, but it’s a shame it is reserved for the back half of the season and is generally given an episode a piece.

On top of all that, there’s the emphasis on Franklin and her family, which takes up as much, if not more, of Franklin’s life story than her musical prowess. Her relationship with White anchors the first half of the season and then the series transitions to her relationships with Ken Cunningham (played by T.I.), and actor Glynn Turman. Cunningham is portrayed as a man who encouraged Franklin to go for a producer credit on her albums, but it’s never shown as a great love — which is weird when Franklin does the music for “Sparkle” and sees the lyrics as reminding her of this great love for Cunningham that is never processed or returned to after this scene.

These moments that make you feel like you missed an episode happen with increasing frequency as there’s more material to get through. Aretha is reminded in one episode about “burning the candle at both ends” and exhibiting alcoholism, but this is never dealt with beyond the initial episode implying that it began and ended in a short amount of time.

This is the most frustratingly portrayed in young Ree’s time on the road with her pastor father C.L. Franklin (Courtney B. Vance at his most flamboyant). Jordan is a stellar young talent, and shows how much of Franklin’s life was defined by her time on the road. She found her strength as a performer yet, at the same time, she didn’t want to be pigeonholed as a gospel singer. But the problem manifests in Franklin’s real-life secrecy, refusing to talk much about her childhood and, especially, the two children she gave birth to starting at the age of 12. The series keeps maintaining Franklin’s wild partying at this point in her life with little discussion about her being a child.

Franklin was a complicated woman who forged her own path. She commanded respect from everyone around her and despite that, as the series shows, people still often made her do things that hurt those in her family. This hostility manifests best in her complicated relationship with her sisters, also singers, but it’s a shame that their relationship feels ill-defined in the flashbacks.

“Genius: Aretha” is a complex tale, messily told. Erivo is captivating, but there’s a need for additional onscreen text to fill in too many gaps that end up becoming the focus of later episodes. Although it is the most cinematic of the “Genius” installments because of Erivo’s spectacular performance, it never loses the feel that this is a series that requires one to listen to a supplemental podcast.