Good Morning America fans were treated to a special treat when the show’s hosts came together at the end of a recent installment to announce some good news.

The hosts for the day, being George Stephanopoulos, Amy Robach, and TJ Holmes, were joined by meteorologist Ginger Zee.

The four sat together at the end of the segment to celebrate the official GMA Instagram handle hitting a whopping three million followers.

The page shared a video of the four thanking the social team and their many fans for following along each day, with Ginger even joking at the end: “Tag me!”

MORE: George Stephanopoulos has best reaction when asked if he will appear on Dancing with the Stars

Fans quickly flocked to the comments section to commend the team and praise them for putting on a great show each morning.

“That is so awesome!!!” one wrote, with another saying: “They’re the best!” and a third adding: “An awesome site to follow.”

However, two key members of the team were missing during that moment, those being Michael Strahan and Robin Roberts, who TJ and Amy sat in for.

Michael has been taking some time off the show to work on other projects and build his own eponymous brand while also spending time with family.

MORE: Lara Spencer keeps her promise and flies to LA to support Sam Champion on DWTS

Robin, meanwhile, has a project of her own to focus on, revealing on social media prior to the weekend that she had gone to Los Angeles.

The longtime ABC News anchor was in LA filming the second season of her Emmy-winning show Turning The Tables with Robin Roberts. 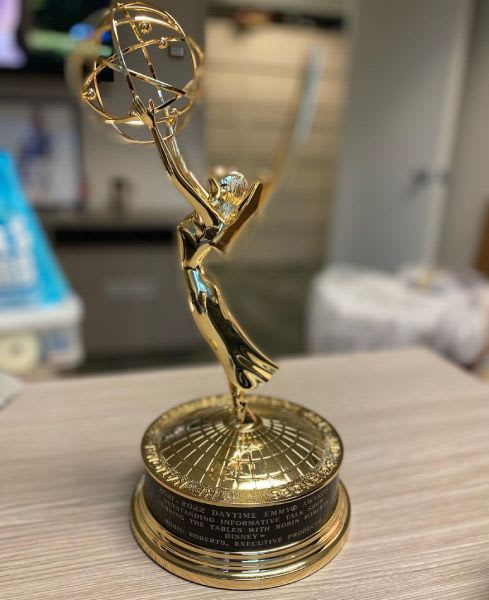 Robin is currently in LA filming her own talk show

She even shared the news that her Emmy Award for the first season had finally arrived at her New York office while she was away.

Robin had also been taking a few days off work to spend time with family, especially when she had been caring for her partner Amber Laign while she was dealing with a bout of breast cancer.