Michael Strahan wants everybody to know that he’s the star of the show when it comes to GMA.

The fun-loving TV host took to Instagram to laugh off his “replacement” after the show put guest Dwayne ‘The Rock’ Johnson in his hosting seat.

MORE: Michael Strahan opens up about working with George Stephanopoulos on GMA

Michael videoed himself on the morning show’s set where Dwayne was promoting his new film, Black Adam.

WATCH: Robin Roberts shares behind the scenes video of Michael Strahan on GMA

Speaking directly to the camera, he said: “You know what they call me around here? They call me the superhero of GMA.”

Dwayne then surfaced behind him and the pair had a fun interaction, laughing off the day’s events.

Michael has been enjoying some much-deserved time away from GMA and the show’s social media joked that Dwayne would now be replacing the former NFL player.

Michael had fun with Dwayne on set

Michael’s seat was filled by none other than Dwayne. “Look out @michaelstrahan @therock is coming for your job!” the caption read.

Fans were quick to comment on the post, with one writing: “Michael I do not think The Rock would take your job!” while another wrote: “Great show this morning!” A third added: “This is why I love GMA. They always seem to have so much fun. Great way to start each day with a smile and laugh with awesome people!”

“America wants it, it feels right,” The Rock joked as he was introduced as Michael’s replacement in the accompanying clip from the show. Sorry Dwayne, looks like Michael is staying put! 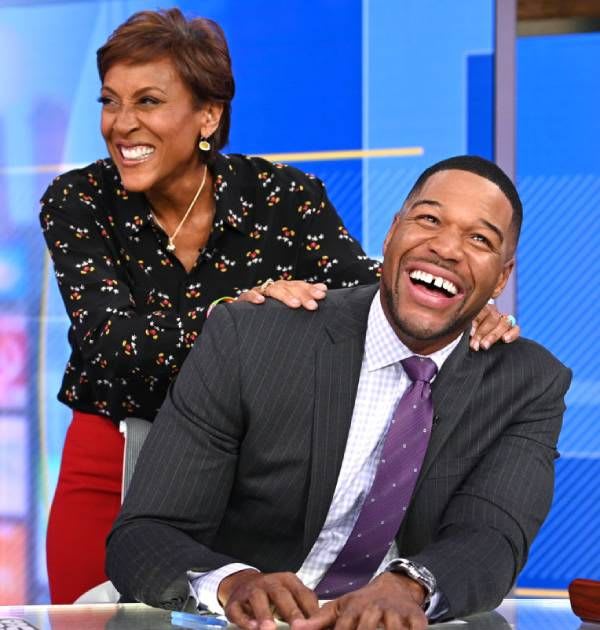 Michael has a great connection with his GMA co-hosts

The father-of-four is a much-loved member of Good Morning America, and he has been on the ABC show since 2016.

The former sports champion works on the program alongside Robin Roberts and George Stephanopoulos on the news anchor desk each morning and he’s missed when he’s not there.

Prior to his job on GMA, Michael hosted Live alongside Kelly Ripa – his first TV hosting job since retiring from his sporting career