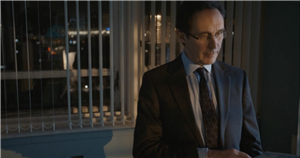 Holby City fans were left distracted during Tuesday's episode, as general surgeon Henrik Hanssen was paged to see to a patient.

When he arrived at the hospital, however, it was revealed that the patient he'd been called to see was no other than his former abuser, Reyhan Shah.

Despite being told that it wouldn't be 'appropriate' for Henrik to see to Reyshan after the wound from his liver transplant opened up, he insisted that as he'd been the one to perform the surgery, he should see to his patient.

"I was paged," Henrik announced as he strode up to Reyshan's ward. "Where's the patient?"

But as he was informed that it was Sahira Shah's father – who had historically abused Henrik – he still insisted: "Well, I carried out that procedure, so I'm best qualified to treat him."

And as he observed the damage done to Reyshan's wound, Henrik said: "We need to get him to theatre straight away."

But fans were left baffled as to why he would be permitted to operate on someone with such a close personal connection, after the abuse came to light at the hospital.

"Well this is highly unethical!" one fan wrote on social media.

Someone else said: "As if he would be brought back to the hospital."

Another Twitter user penned: "I'm not sure Henrik would even be allowed to take Reyhan into theatre."

Someone else ranted: "Henrik's abuser's in… of course he should be treated by Henrik! FFS. It's like you WANT to present this case badly for all sexual abuse victims and make them feel the fear, humiliation and shame Henrik is to stop people coming forward!"

"Would Henrik really be treating Reyhan?" someone else asked.

Later in the episode, Reyhan insisted it was "genuine affection" that Henrik had 'misconstrued'.

And as his grandson asked to move in with him, things took an even darker turn as Abs asked if their relationship was the same, and Reyhan said he "loved" Abs much more.

As Abs reached out to touch his grandfather, Reyhan snapped: "No!"

"How many times have I told you? This is our secret, and it has to stay that way. People will not understand," Reyhan snapped at Abs.

Later, Abs told his mum Sahira that "it wasn't abuse", leaving her and Henrik shocked.

After Abs stormed off, it was down to the two of them to lead the search for the youngster – but Sahira broke down in the corridor, worrying that she was a bad mother.

The tragic storyline has left fans devastated, with one writing on Twitter: "Poor Henrik and poor boy."

"The look on Henrik's face when Abs shouted 'it isn't abuse!'" another wrote, accompanied by crying emojis.

Someone else penned: "Playing Abs being abused by Reyhan and having no idea what he's doing is wrong – truly an amazing performance showing Abs in that same place Henrik once was."

And the episode ended on a huge cliffhanger, with Reyhan pronounced dead.