Harrison Ford, who turns 79 next month, has been shooting Indiana Jones 5 over the last few weeks across the UK. And now Disney have confirmed the Hollywood legend has suffered an injury during production. The studio said in a statement: “In the course of rehearsing for a fight scene, Harrison Ford sustained an injury involving his shoulder.”

Disney added: “Production will continue while the appropriate course of treatment is evaluated, and the filming schedule will be reconfigured as needed in the coming weeks.”

This news was originally reported by Deadline, who stated that the extent of this shoulder injury wasn’t immediately known.

Ford previously broke his leg on a hydraulic door while shooting on the Millennium Falcon set for Star Wars: The Force Awakens in June 2014.

The star, who will be 80 when Indiana Jones 5 hits cinemas next year, is in great shape for his age so hopefully his shoulder injury won’t be anywhere near as bad as the Star Wars accident. 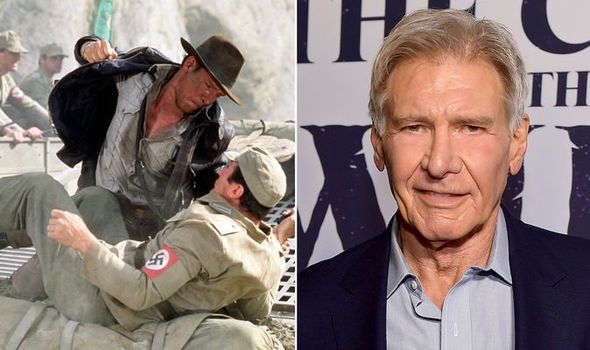 Indiana Jones 5 is the first movie in the franchise since 2008’s Kingdom of the Crystal Skull, which was set in 1957.

A couple of years ago Steven Spielberg, who directed the first four movies and is producing the fifth, said the latest will be set in the 1960s.

Joining Ford in the cast are Mads Mikkelsen, Phoebe Waller-Bridge and Toby Jones.

While Marion star Karen Allen and Sallah actor John Rhys-Davies have appeared coy about their involvement in the movie during recent interviews to celebrate the 40th anniversary of Raiders of the Lost Ark.

Logan’s James Mangold is directing Indiana Jones 5 and, as Disney said, he will continue to shoot around Ford while he’s treated for his injury.

The filmmaker recently blasted backlash to the star’s advancing age in a fiery Twitter encounter.

Salty Nerd Podcast’s Matthew Kadish had tweeted: “To anyone thinking #IndianaJones5 might be good, just let me point out…

Mangold hit back at the viral tweet by making these counterpoints in the comments.

The Indiana Jones 5 director tweeted: “Thanks, Matt! 1) Keep making the world a better place crapping on things in the 1st week of production from your basement.

“2) Never seen a script by Jon. Nothing against him. Just reality.

However, the original critic chimed in again saying how Ford will always be Indy, but argued that since the star’s pushing 80, he might not still be believable as the character if he’s doing all these “crazy action scenes.”

Mangold replied: “Have you read the script, Matt? Clearly not cause you don’t even know who wrote it. So why don’t take a rest on my show till there’s a trailer or a title or something for you to be upset about. For all you know, I could be addressing all your worries.”

Kadish added: “Sir, I would love it if you proved me wrong and made a great Indiana Jones movie. I’ve been an Indy fan since I was a kid and its one of my all-time favorite franchises. But it’s hard to get excited over what I’m seeing.”