Jana Duggar is being praised for “standing up” for herself after she is shown in a photo wearing pants and spending time reading to Spurgeon and Henry Seewald.

This isn’t the first time Jana has been spotted wearing pants, but it is one of the very few photos that have captured moments like this.

Why did a Counting On fan praise Jana Duggar for standing up for herself?

Wearing pants has been frowned upon in the Duggar household forever. Girls were conditioned to wear skirts or dresses and they had to be a certain length too.

Several of the Duggar daughters have now worn pants. Jana Duggar is the latest sister to jump on the trend that Jinger Duggar initiated when she married Jeremy Vuolo. Jill Duggar is also wearing pants a lot more these days.

The idea that the women are wearing pants has been likened to standing up for themselves against some of the more outdated rules Jim Bob and Michelle Duggar have put into place. Between their dress code rules and the belief that what the girls wear dictates how men and boys look at them, their evolving style has been a big deal. 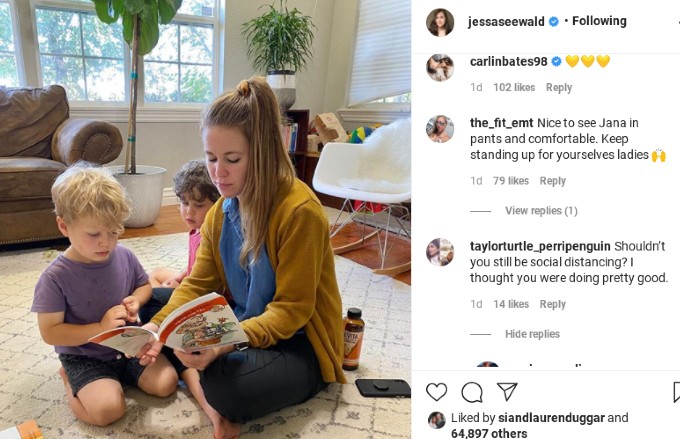 When will Jana Duggar get married?

Jana Duggar has made headlines over the years because the oldest single Duggar child is always the bridesmaid and never the bride.

She has been pressured about when she will be married like all of her adult-aged sisters. Jill, Jessa, Jinger, and Joy-Anna Duggar have all found their husbands and started families. Many of her brothers, including her twin, John-David, have also tied the knot and have children.

During the most recent season of Counting On, Jana addressed her single status. She had a conversation with Abbie Grace Burnett and revealed that she is tired of hearing constant questions about her love life. The reality star is waiting for the right man to come along, something she believes will happen.

For now, she is content being herself and working on the business she mentioned launching during the latest Counting On season. Jana has a lot of plans, and many of them focus on being productive, not finding a husband.

She is the fun aunt and the one who does a lot with all of the kids. Jana Duggar can be seen playing with her nieces and nephews when they spend time at the big Duggar compound. There has been some insinuation that she is the resident babysitter, but it looks like she may enjoy all of the time spent with the little ones.

Counting On is currently on hiatus.