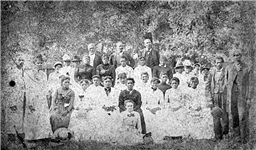 Networks and streamers are setting special programming to celebrate Juneteenth, the holiday commemorating the emancipation of those who had been enslaved in the United States. More specifically, Juneteenth marks the enforcement of the Emancipation Proclamation in the last Southern holdout state, Texas, on June 19, 1865.

The 156th anniversary of that day arrives next Saturday, and this year more than ever Juneteenth is being celebrated by Hollywood. See the list of TV, streaming and festival programming below. We’ll be updating as more information comes in, so refresh for the latest.

ABC: On Friday the 18th, ABC will broadcast Juneteenth: An Evening of Celebration & Resilience – A Soul of a Nation Special Event. The two-hour ABC News special will be hosted by Leslie Odom Jr. will include performances by Jimmie Allen, Chloe Bailey (of Chloe x Halle) and Leon Bridges. Co-anchor Michael Strahan sat down for a one-on-one interview with former President Barack Obama about race, resilience and Obama’s book “A Promised Land.” The special will also include stories by ABC News anchors and correspondents.This marks the second year in a row ABC News will produce a special to honor the history and significance of Juneteenth. In 2020, ABC News’ primetime special Juneteenth: A Celebration of Overcoming was the number one program across the board in its time slot. The special will be available on Saturday on demand and on Hulu. The special airs Friday, June 18 from 9:01 p.m.-11:00 p.m.

ABC Owned Television Stations: ABC O&Os will highlight African American content and programming in their eight markets: New York, Los Angeles, Chicago, Philadelphia, San Francisco, Houston, Raleigh-Durham. For more on each station’s Juneteenth programming slate, click here. The company’s digital-native lifestyle brand, Localish, which is available on digital subchannels in those eight markets will spotlight Juneteenth on its most popular show, More in Common. Host Michael Koenigs will interview one of Juneteenth’s leading advocates, 92-year-old Texas native Opal Lee, who has been marching two and half miles in designated states across the country as part of a walking campaign pushing for Juneteenth to become a nationally-recognized holiday. Symbolizing the two and a half years it took for news of the Emancipation Proclamation (signed in January 1863) to reach Texas on June 19, 1865, Lee hopes the walking campaign will raise awareness about the importance of this historical day of liberation. The More in Common “Juneteenth” episode will air in linear broadcast in select cities on ABC (check local listings for airdate information). The episode will also be shared across the Localish social network on Friday, June 19, as well as on ABC.com.

TBS TBS will kick off the weekend with the premiere of its new Friday Night Vibes block. Friday Night Vibes is a new 52-week movie showcase featuring diverse voices. Snoop Dogg joins host Tiffany Haddish and co-host Deon Cole as their first in-studio guest. The premiere block is a double feature of Creed and Creed 2 as well as a discussion on the origins of Juneteenth. On Saturday, TBS will air a Juneteenth Movie Marathon starting at noon, ET with the Creed films followed by Black Panther at 5 p.m., ET. Friday Night Vibes debuts on June 18 at 7:30pm ET/PT.

PBS: PBS has scheduled two programs in honor of Juneteenth. Say It Loud, the PBS Digital Studios series that celebrates Black culture, context and history will premiere a new episode entitled “Are Black People Truly Free? Juneteenth and the Continuing Fight For Liberation” on Tuesday, June 15. PBS stations will also air Slavery by Another Name, a powerful documentary highlighting how many African Americans were pulled back into forced labor with shocking brutality after the official end of slavery in 1865. Slavery by Another Name will air on Saturday, June 19. Both programs are free to audiences and available via the PBS Video App and PBS.org.

Peacock: Rachel Boynton’s Civil War (Or, Who Do We Think We Are) explores how Americans tell the story of the country’s Civil War. Filmed from President Obama’s final year in office through the present, it interweaves scenes and interviews filmed in the North and South, painting a multi-faceted portrait of the American psyche and the deep roots of our turbulent times. The film lays bare a nation in denial, haunted by an embittered past and the stories it refuses to tell. Civil War (Or, Who Do We Think We Are) is exec produced by Brad Pitt and Henry Louis Gates, Jr. It premieres on the streaming service on June 17.

Tribeca Festival: The 2021 Tribeca Festival has a full lineup of specially-curated Juneteenth programming. Each day throughout the festival, Tribeca’s storytelling verticals will highlight the voices of the African Diaspora with an emphasis on African-American artists, performers, filmmakers and interdisciplinary creators — all culminating on Saturday’s Juneteenth holiday. For the first time ever, Tribeca will present The Harry Belafonte Voices For Social Justice Award named for the famed performer, actor, activist and civil rights leader. The Belafonte Award recognizes individuals who have used storytelling and the arts to enact change in their communities. This year’s inaugural recipient is Stacey Abrams; honored for her outstanding leadership, service and commitment to fighting against injustices through her work as a political leader, voting rights activist and novelist. Tickets and programing specifics are available at www.tribecafilm.com/festival. Tribeca runs June 9-20.

The Broadway League: The Broadway League’s Black to Broadway Initiative will present its inaugural Broadway Celebrates Juneteenth, a free outdoor event centered around Black joy and unity that will feature Black Broadway performers in a 90-minute concert. The program is open to all, including those who identify as Black, their allies and anyone else who feels a connection to this holiday. Broadway Celebrates Juneteenth will feature cast members from such shows as Girl from the North Country, The Lion King, Moulin Rouge, The Phantom of the Opera, Tina: The Tina Turner Musical and Thoughts of a Colored Man. There will be special appearances by Lillias White, Ben Vereen and more to be announced in a concert of song and dance with live music provided by The Music Performance Trust Fund. The inaugural event will take place in Times Square (Broadway between 43rd & 44th Streets) on Saturday, June 19, 2021 from noon – 1:30 PM (rain or shine).