Kate Chastain is opening up about watching Below Deck Season 8 following her departure from the Bravo yachting show.

The trailer for the upcoming season of Below Deck was full of jaw-dropping moments. Captain Lee Rosbach has even shared there is a first from him and the show during Season 8.

Another moment or rather, a revelation was who replaced Kate as the chief stew. Francesca Rubi is stepping up to the plate to take on the role. All eyes will be on Francesca, with lots of comparisons between her and Kate during the season for sure.

It was strange for viewers to see a first-look teaser of Below Deck that didn’t feature Kate bringing some drama. As anticipation for the new season heats up, Kate is sharing what it will be like for her to watch the yachting show.

Comparing Below Deck to an ex

In an interview with Decider, Kate likened watching a season of the Bravo show without her in it to an ex after the first-look footage dropped.

“It does feel like seeing my ex. But it’s like, even when you break up with somebody, even if you don’t want to be with them anymore, you still don’t want them to like their new girlfriend better,” she explained to the website.

The former chief stew reiterated her comparison to an ex and expressed her desire for the next season of Below Deck to be a mega-hit.

Kate’s relationship with Captain Lee is one reason she will always root for the show. She joked she was interested to see how he handled life at sea without Kate. 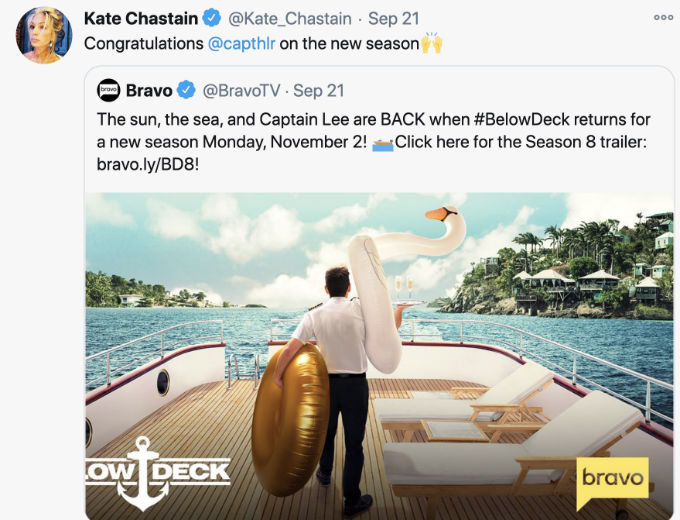 Fans know Kate will be sharing her thoughts on the season via social media once the yachting show hits the airwaves.

What is next for Kate?

The Below Deck alum has become one in-demand lady in the past few months. Kate didn’t let the coronavirus pandemic stop her from pursuing creative ventures with Bravo.

Thanks to her Below Deck knowledge, Kate has given commentary on both spin-offs, Below Deck Mediterranean and Below Deck Sailing Yacht.

She even earned her own limited series show, Watch with Kate, that focused on the most dramatic episodes in the current Below Deck Med season.

Kate also appeared on one episode of the Bravo digital series Ghosted.

Now she is making noise with Bravo’s Chat Room as host and executive producer. The virtual chat was ordered as a limited series. There is a good chance it will get a longer run thanks to fans.

Whether Bravo’s Chat Room continues or not, Kate Chastain will continue to make a name for herself outside Below Deck but within the Bravo family.

Below Deck Season 8 premieres on Monday, November 2, at 9/8c on Bravo.