Kimberly Hart-Simpson: I have found labels challenging but love is love 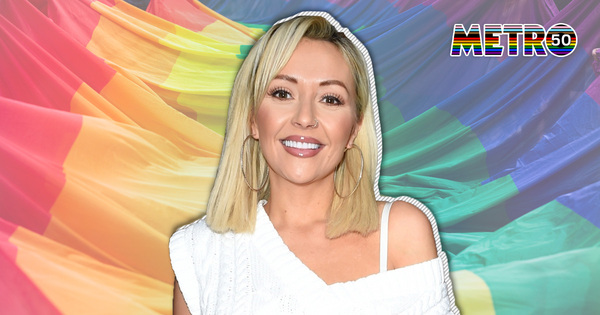 Being asked to be part of Metro.co.uk’s Pride Takeover month has made me reflect on what Pride means to me.

I guess in a manner I was already part LGBTQ+ community before I even knew I was, and I still struggle to attach a definitive label for myself between gay/bi/pan, because in the arts industry you naturally become an ally.

It’s one of the safest working environments I have been part of, where expression isn’t an odd thing, but almost a necessity. So finally coming to terms with my sexuality and what I like wasn’t a big ‘coming out moment’; in fact it started with a couple of drunken nights changing my Tinder preferences to men and women.

And then waking up in the morning and changing it back to just males, nervous someone had seen me on there and would then see me as gay.

Logic now suggests that if they did, it would mean they were gay too so if anything, I would have had someone to talk about that with.

Acceptance can come in the most normal of settings such as my friend casually mentioning that she fancied a girl, to my reaction of ‘wait are you bi?’.

And it really was that simple – the power of her saying it out loud while the world continued to move meant that, if I just said it, then I can stop with this ridiculous ‘I can only be gay/bi/pan around the 3am, six vodkas deep movement I had started’.

My dating preferences have since changed. Today my settings are ‘everyone’. Which leads me onto my label…

I find labelling a challenging concept, though I respect and understand why they are needed. Labels generate a conversation and explanation.

It helps us learn all about people’s sexualities on the wide spectrum, but it also makes me personally feel pressured to state who I am today, but what happens if I am not that tomorrow?

Pansexuality is a new term that was revealed to me on a dating show I did in 2020: ‘Celebs Go Dating – The Mansion’.

Mid-way through a double date with two girls (I know what you’re thinking – ‘two girls, you player!’ But I wasn’t complaining!), one of them asked me about my sexual preferences; my reply was that I basically fancied anyone.

I don’t really see gender as part of my picking process, and it was then that she said it sounded like I was ‘Pan’.

After her taking some time to explain what that meant, I replied with ‘yeah that sounds like me’; and just like that, I am no longer bi but pan.

This was picked up on the press and before you know it, I am getting messages in abundance – some of them saying thank you for coming out and others calling me ‘Tefal’. Yep as in the non-stick pan. Get it?

Positive or negative, it didn’t make a difference to who I was in that moment, but I certainly felt an element of pressure around the label.

I just actually wanted to be Kimberly, who likes who she likes. The biggest issue with a label is that it COULD stunt growth.

What happens if next week, there is a new word that better describes my sexuality, does that then mean I was insincere with my last label?

Does this then feed people’s opinions to say, ‘she must be confused’?

The reality is, I am not confused at all, it’s all crystal clear. For me love is love.

Last month, in an interview with Loose Women, I stated I was Pan, and in that moment it best described where I am at with my sexuality.

But I have the luxury of being a 35-year-old, over-opinionated, confident, and well supported person.

I wasn’t this girl in the Tinder days, time has allowed me that. But it doesn’t mean to say that this is who I must be all my life.

And my point is this, if you are struggling to define what label best describes you, give yourself time and just start with your name.