MEGAN Fox showed off her gorgeous figure completely nude on the cover of GQ with boyfriend Machine Gun Kelly.

The power couple graced the Autumn/Winter 2021 issue of the magazine hitting newsstands on October 14. 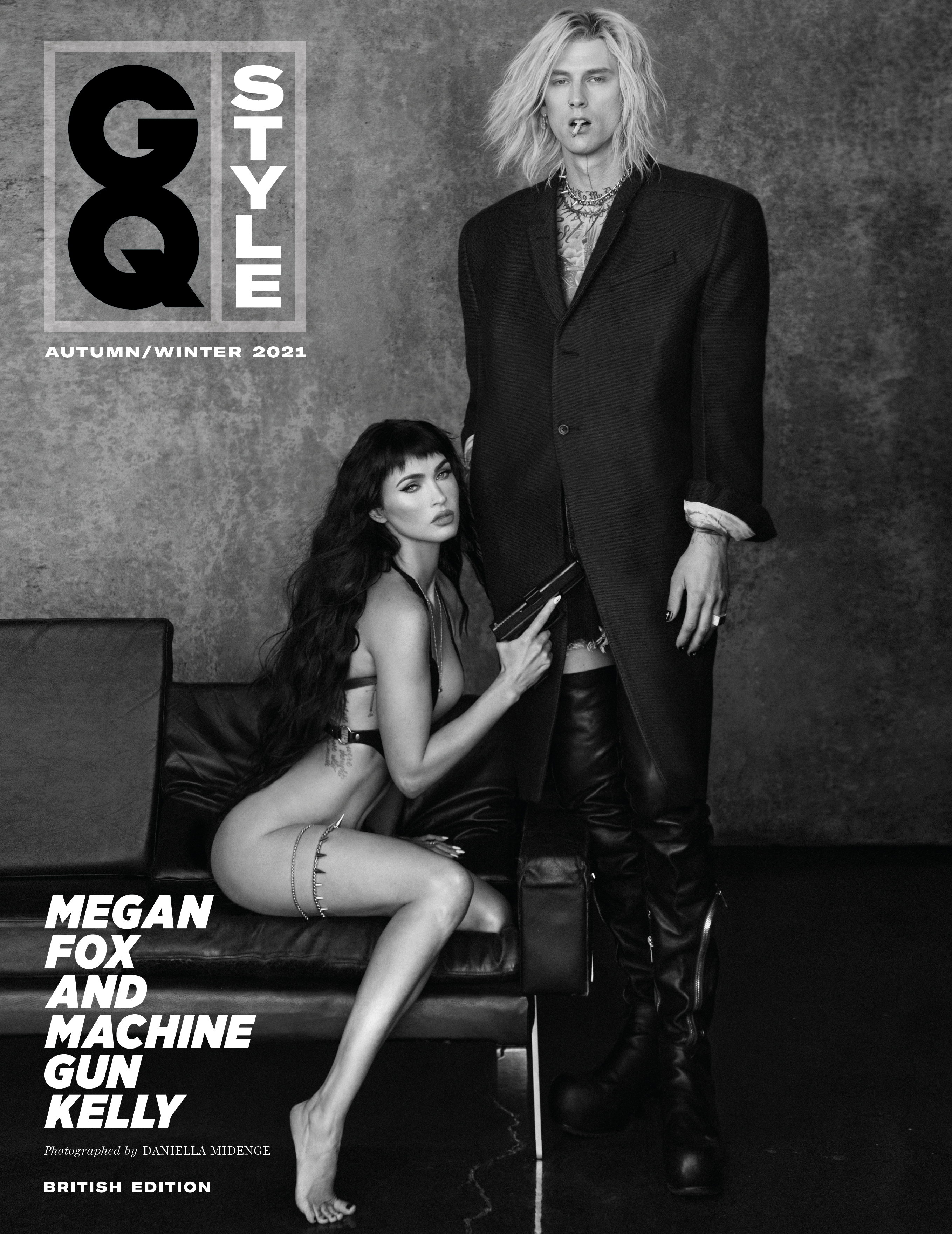 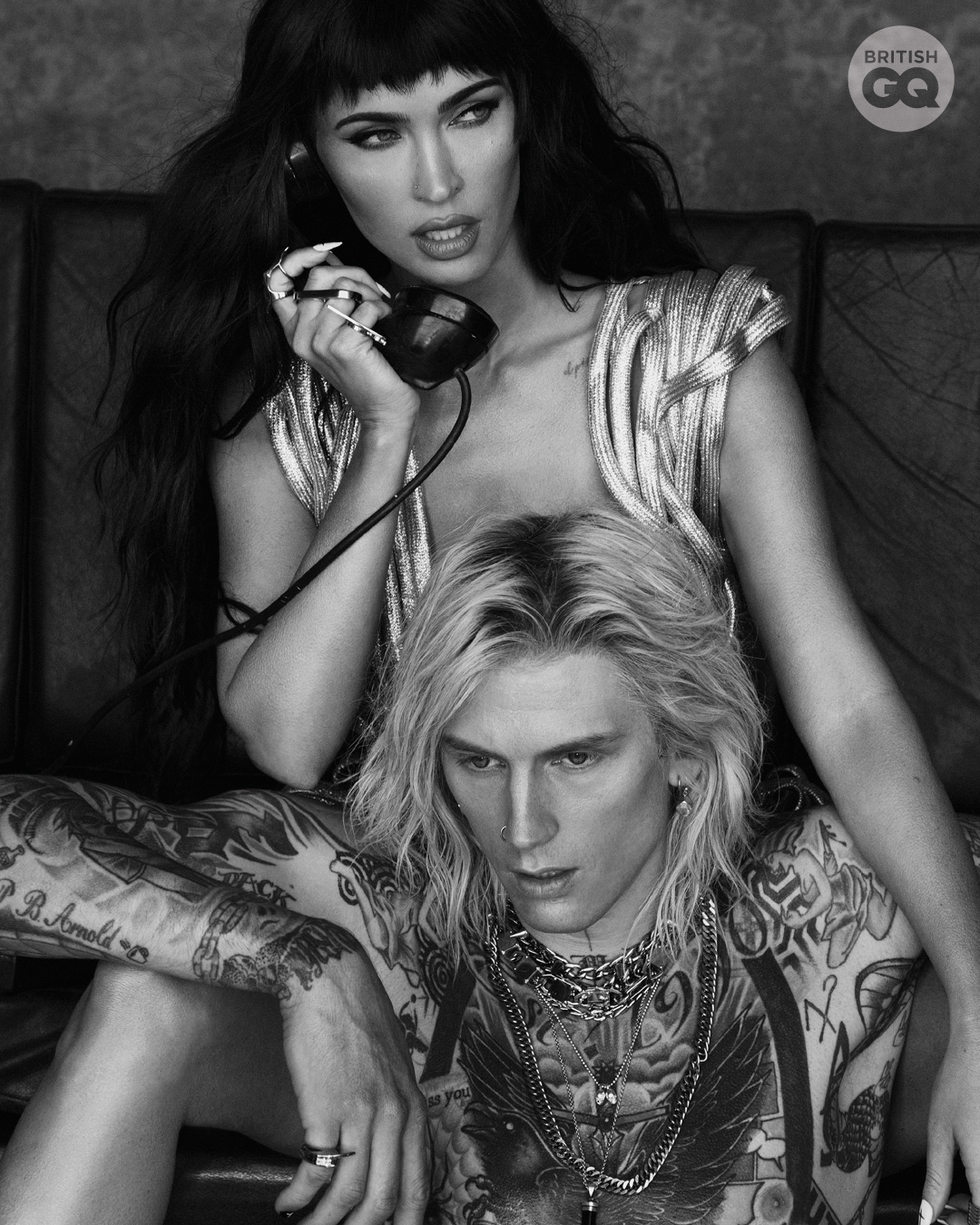 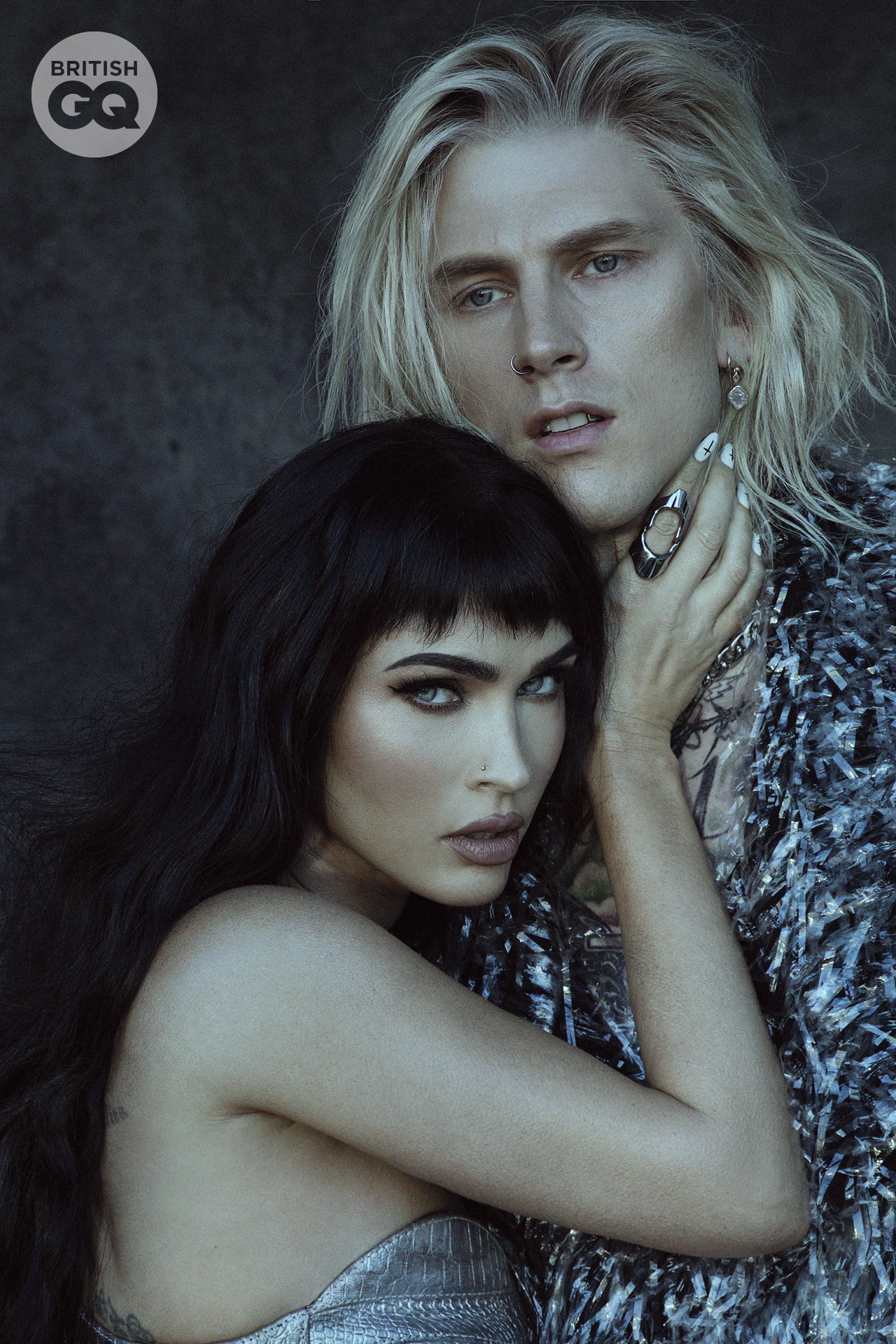 Megan posed naked for the cover photo sitting on a couch while pointing a gun at her rocker beau as he stands beside her.

The actress gave a sultry look at the camera as her long dark locks flowed down her back.

The Bloody Valentine singer sported a much longer hairstyle as his wavy blonde hair rested near his shoulders.

He held a sexy gaze for the photo, mouth agape while holding a cigarette between his teeth.

Another photo from the shoot shows Megan straddling the singer as he rested in between her thighs.

MGK – whose real name is Colson Baker – exposed his tattooed arms and chest in the shirtless pic while the Jennifer's Body star held the receiver of an old-fashioned phone to her ear.

The pair embraced for another steamy snap where Megan wrapped her hand around the songwriter's neck.

This isn't the first time that the actress bared all for the camera.

Megan recently posed in a nearly-nude photoshoot with her newfound BFF Kourtney Kardashian to model the Kardashian's SKIMS line.

Megan and Kourtney, who have become close after MGK and Kourtney's boyfriend, Travis Barker became friends, posed for a new promo for the SKIMS's thong collection.

They stunned fans in the Jersey Dipped Thong and the Jersey Triangle Bralette.

Modelling the brand of swimwear, the 35-year-old beauty wore a deep-cut cotton thong with the reality star.

The pair wowed fans and friends alike on social media with the saucy underwear snaps as they covered up their bare chests with their hands.

The picture sent fans into a frenzy, with one writing: "STOP IT I WAS NOT EXPECTING THIS".

Another added: "Omg look at these goddesses 😍😍😍".

Kourtney herself even commented under the pic writing: "this lifetime and the next 🖤".

They also posed for a pic sharing an apple between their lips in a sultry snap for Instagram.

The duo also took the stage together to introduce their boyfriend's for their performance at the 2021 MTV VMA's.

The brunette bombshells presented the last performance of the night as their partners took the Barclays Center stage in New York City to rock out to their new song, A Girl Like You.

The Transformers star took the mic first, and teased the upcoming act: “I’m a huge fan of this next performer. I’ve watched him grow and not just as an artist but also as a person.”

“I’m a fan too and I think his drummer is super hot,” her new friend Kourtney said of her man.

“New York I need you to get loud for our future baby daddies,” Megan said.

Megan started dating MGK, 31, in May 2020 after her marriage to Brian Austin Green came to an end.

The Til Death actress had been with Brian, 48, since 2004 and they co-parent three children together; Noah, nine, Bodhi, seven and Journey, five. 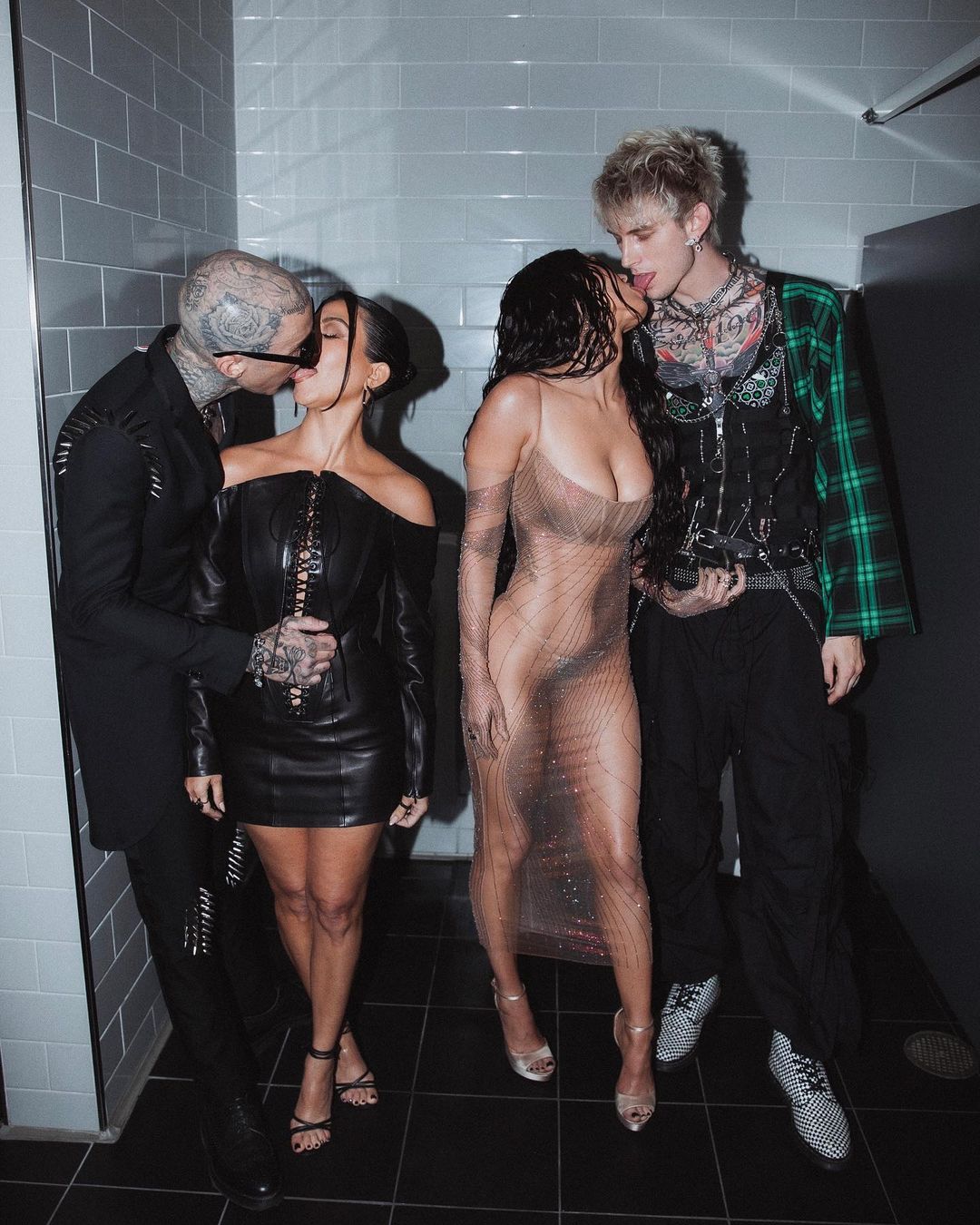 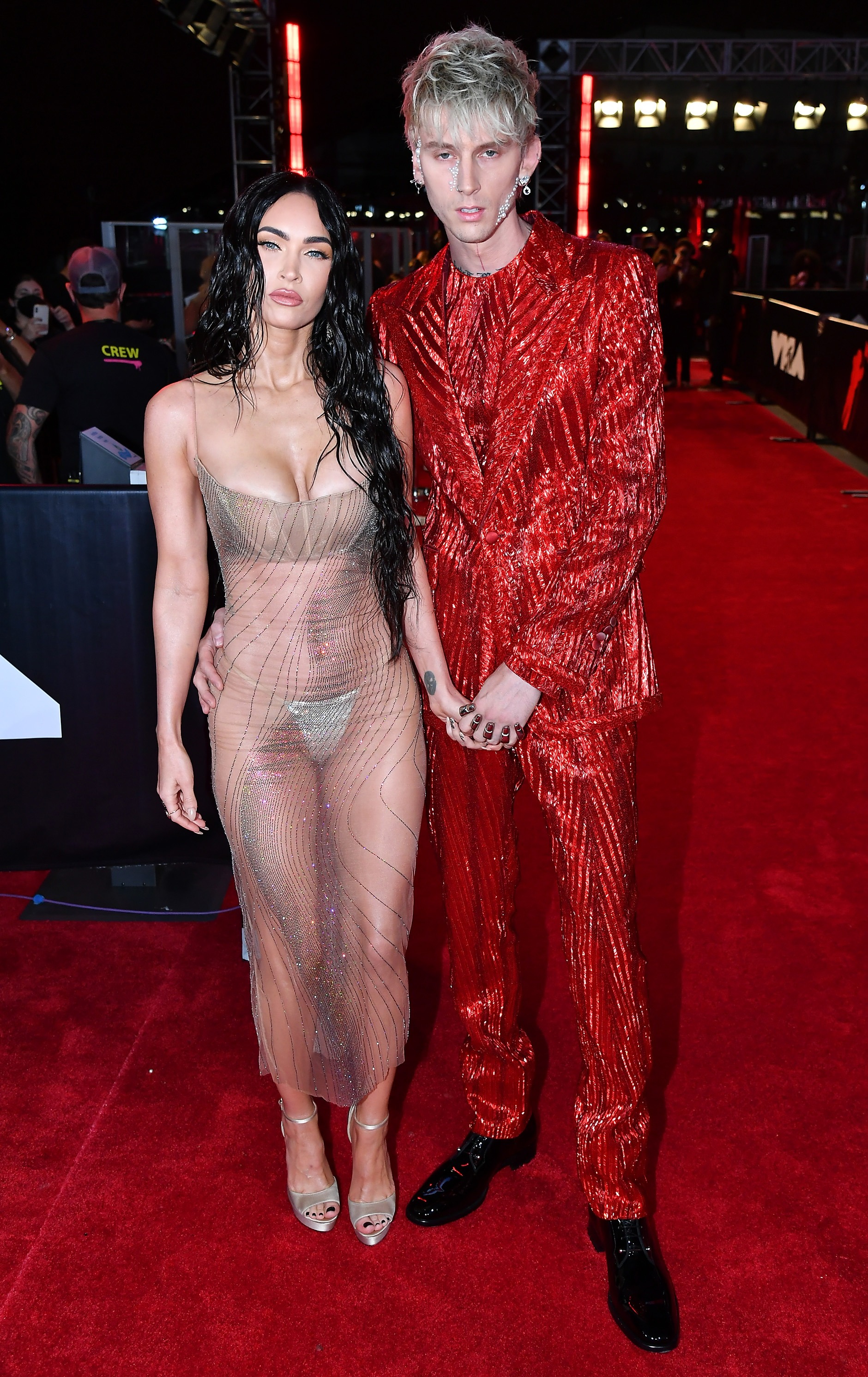 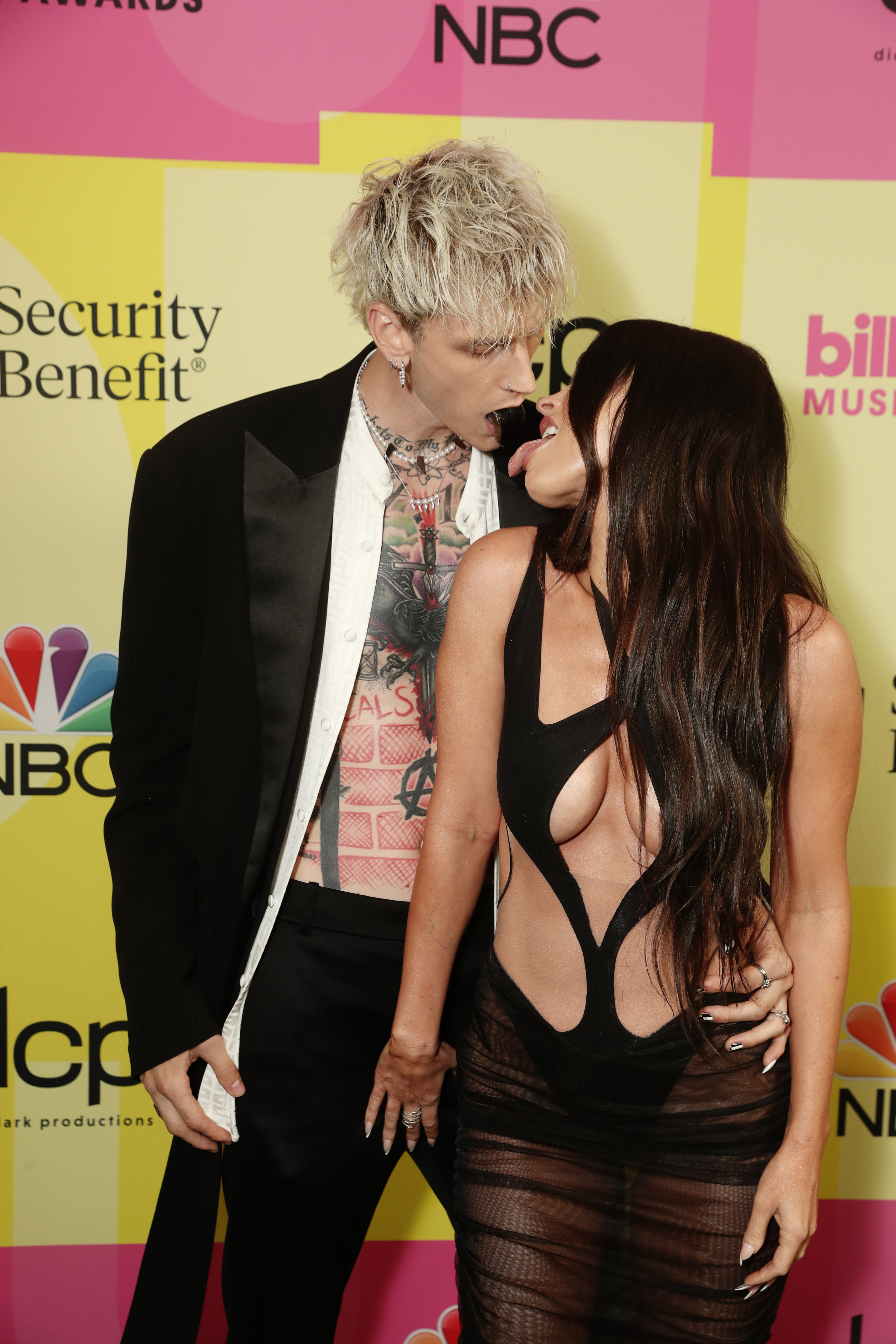