“My family lived in the south shore neighborhood of Chicago,” fake Melania tells Stephen Colbert on “The Late Show” 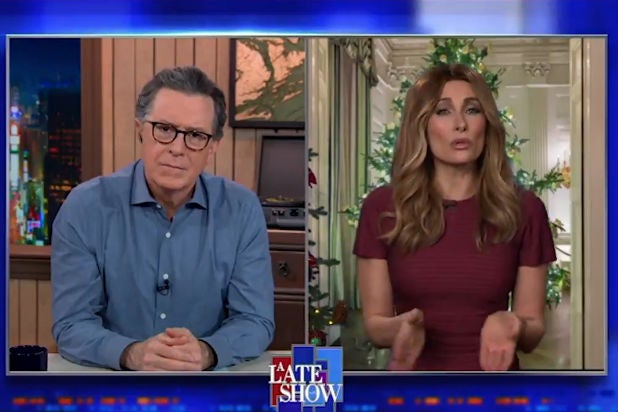 On Monday Stephen Colbert spent a little time getting into the Christmas spirit by welcoming back “Melania Trump” — actually recurring “Late Show” guest star Laura Benanti — to talk about the holiday season her IRL counterpart was secretly recorded complaining about. And in what will be both fake and real First Lady’s last White House Christmas, the fake Melania also took a moment to blatantly plagiarize Michelle Obama one last time for old time’s sake.

Now quick, brief catch-up for anyone who forgot given that it’s been what feels like a decade since Trump was elected. Back in 2016 at the Republican national convention, Melania gave a speech that blatantly plagiarized a 2008 Michelle Obama speech. (In what is of course a Trump family tradition, one of Melania’s employees took the fall for the ethical lapse.) And of course, we all remember how one of Melania’s ex-friends secretly recorded their conversations before their final falling out, and on one of the recordings Melania complained about having to handle decorating the White House Christmas display.

Anyway, back to Colbert. To start the gag, he talked about Melania put together an unusually traditional Christmas display this year, and then invited the fake version on to talk about it.

“Merry hello and very Christmas to you, Stephen,” fake Melania said as she appeared on screen.

First up, Colbert asked “Melania” how she feels about all the White House events Trump held that amounted to COVID-19 superspreader events.

“Oh who doesn’t get a little sick after a good party, ay? Besides, I’ve always considered nausea a side effect of spending an evening with my husband.” Zing!

Then they discussed the Christmas display, about which fake Melania said: “After years of buying spooky decorations at the Halloween store, I finally wanted to express the real Melania. So I took beautiful, perfectly happy trees, dragged them into the White House, and covered them with glitz so you don’t realize they are slowly dying inside.”

They went back and forth thus for a couple of minutes — including a bleeped-out, profane Christmas carol from “Melania” — and then she got to her memoir and read an excerpt.

“My family lived in the south shore neighborhood of Chicago, in a tiny brick bungalow, that belonged -” fake Melania said before Colbert interrupted her to point out she plagiarized Michelle Obama’s best selling memoir “Becoming.”

“How dare you,” fake Melania asked. “That is from my book, #Bebestcoming. It’s going to be a big be best seller.”

There’s more, and if you want to watch it you can below, right now: