Murderous bride Kim follows Harriet through storm in Emmerdale – to kill her? 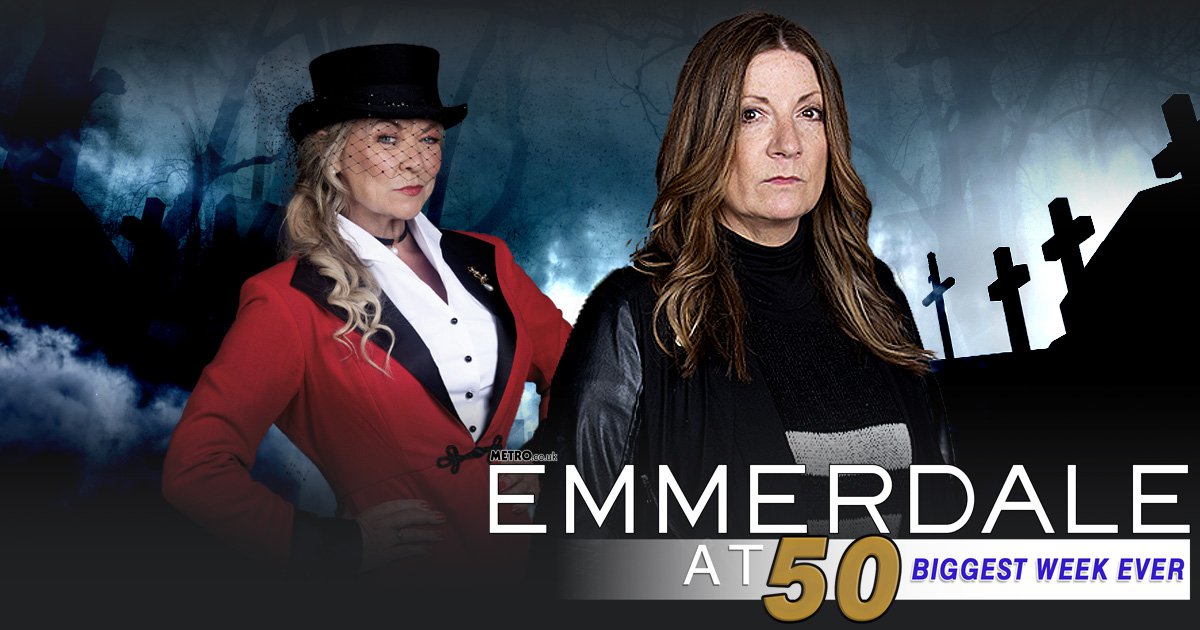 It’s the day of the wedding for Kim Tate (Claire King) and a day of reckoning for Harriet (Katherine Dow Blyton) in Emmerdale.

Will the wedding go ahead now that Kim believes Will (Dean Andrews) wants Harriet back after overhearing their conversation at the scrapyard? She thinks Will is pulling a fast one on her and there’s nothing Kim likes least, so she has a decision to make over whether to go ahead with the nuptials.

To clear her mind, she heads out on a solo horse ride.

When she arrives back at Home Farm, she and Will have an almighty row with Will insisting he does not want to be with Harriet. He’s done all he can to convince her and leaves it with Kim to decide whether they can move forward. Is it enough to get through to her?

Before he gets his answer, Kim heads off to confront Harriet but tricks her into the meeting with a fake message she believes is from Will. Harriet’s shocked when she opens the door and finds her love rival stood there with smoke billowing from her ears.

But Harriet is not afraid of Ms Tate and when things get heated between the two women, Harriet snaps – grabbing Kim by the throat. Would she go as far as to kill to get Will back in her life?

While she has the opportunity, she doesn’t take it. Later, as the wedding guests settle at the church, they are notified that the bride has arrived.

And there Kim is in all her glory, looking majestic sitting side saddle on horseback. She’s a vision and only goes further to remind Will his love lies with her. But as the ceremony takes place, the storm begins to gather pace.

Back at Home Farm ready for the reception, Kim is shocked when Lydia arrives to reveal pregnant Amelia (Daisy Campbell) has gone missing and a search party is needed.

Kim springs into action and grabs her trusty steed – heading out into the wild conditions to help save the teen. Harriet also joins the search and jumps on the back of her quad bike in a bid to locate Dan’s vulnerable daughter.

But as they both battle the elements Kim spots the tire tracks of Harriet’s bike and her mood changes. If something were to happen to Harriet, the storm would take the blame. Kim sees an opportunity to get rid of her love rival, will she take it? Will Amelia fall victim to Kim exacting revenge?

If Kim does decide to murder Harriet, it could all be for nothing, as actor Dean Andrews who plays Will confirms that Will only has eyes for Kim anyway.

‘He still cares about Harriet. They’ve obviously had a lot of history. He forgave her for her wrong doings and she forgave him for his,’ he said. ‘They had a special bond, but I do feel he has moved on and really cares about Kim now.’

He added that though Will may have led Harriet on just a touch, there was never anything in it as he loves Kim differently.

He said: ‘I think he feels he has not really said too much out of place. Perhaps a little drunken flirtation.

‘He hopes deep down Kim knows he loves her and that Kim understands, although he still has feelings for Harriet these are different to how he feels for her.’

But no doubt Will’s feelings would change if he learns Kim has turned murderous. Could Kim be about to kill her marriage along with Harriet out in those woods?