Saul Williams’ latest endeavor is the multi-pronged “MartyrLoserKing Project,” which focuses the musician, poet, writer, actor, and director’s insights and talents on an ambitious idea that unfolds over three record albums, a graphic novel, and now a film, co-directed with wife and creative partner Anisia Uzeyman, titled “Neptune Frost.” Making its world premiere at the 2021 Cannes Film Festival, the curio science-fiction musical is arguably less about a specific story, and is more laudable for its representation of a point of view seldom expressed, and in a manner rarely experienced in cinema.

“Because of the social and global issues flooding my actual and virtual timelines, and their countless intersections, as well as the many discussions of those issues, it was important that I fused and fueled all of my creative interests into one story,” Williams said of his directorial debut. “I wanted to find a way to talk about everything at once, without necessarily preaching.”

There’s a synopsis that summarizes the film, but doesn’t fully capture its ambition: a love story between an intersex runaway (Neptune, played by both Elvis Ngabo and Cheryl Isheja) and a coltan miner (Matalusa, played by Kaya Free), “who find each other through cosmic forces, sparking glitches within the greater divine circuitry when they connect, giving birth to a virtual marvel.”

The techno-lingo is purposeful; the entire world Williams and Uzeyman have created may or may not be part matrix simulation, and Neptune Frost may or may not be the motherboard, or a modem, serving as a bridge between Matasula’s analog world and some parallel universe that is commenting on the world parallel to it: ours.

Per the filmmakers, “Neptune Frost,” like most art, is certainly open to interpretation. Although, at the very least, its broader anti-establishment, even anarchic message should be evident.

The idea was born in 2012 when both were in Senegal shooting Alain Gomis’ “Aujourd’hui.” In a country that was very much open for business to China (contemporary Sino-Africa relations loom large in “Neptune Frost”), Williams witnessed the meshing of worlds that is depicted in his celestial cyber musical.

“People were buying what they thought was the latest technology, like Beats headphones and smartphones, but the traditional ideas, in terms of teenagers building drums for use in local dance competitions, were still present,” he said. “So you’d see a teenager come home from school, build his drum with found materials, put his Beats headphones on, and on the side is the smartphone, and I was just taken by the mixture between the ‘ancient’ technology and the new technology as something to be spoken of.” 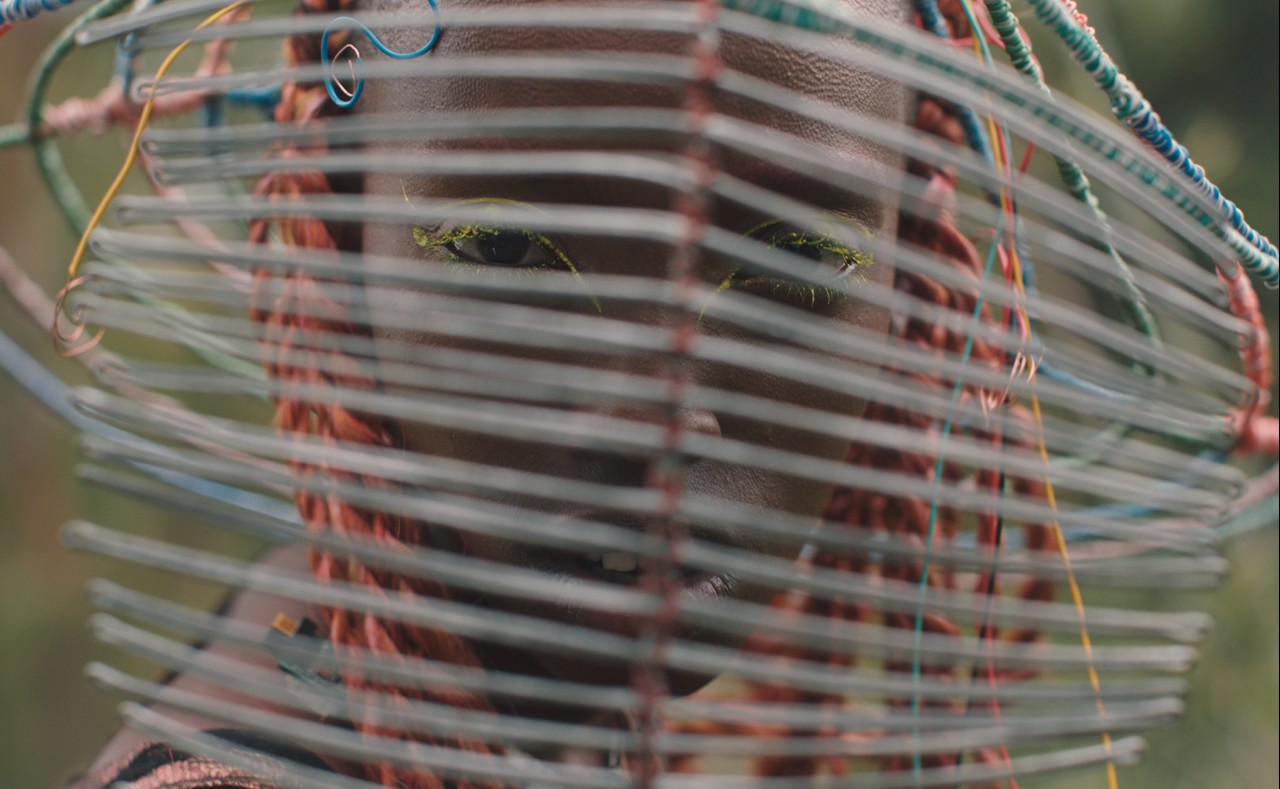 It was also around the same time that he learned about the mining of coltan and its global relevance. While an awareness of the history of this “conflict resource” abundant in center-east Africa (Burundi, Democratic Republic of the Congo, Rwanda) isn’t necessary to appreciate what is billed as a love story, it would help provide some context. Like other areas of the world with coveted resources (for example, oil in the Middle East), the vast mineral wealth of the region has been at the root of years of violence and political unrest for control over its supply.

“What I find interesting is that so much of our tech advances are so heavily reliant on old-school analog exploitation,” Williams said. “You can imagine the story of what’s happening around those coltan mines and all the violations that go down there, just so that we can call the next Uber. Connecting that to the sugar, the coffee, the rubber, the cotton, and all of these other resources that have led to exploitation, and then making other connections upon connections, like the Dogon with the binary code that says they’re from Sirius, the gender fluidity which is the breaking of the binary, it’s world-building. But audiences who have never heard of coltan may ask themselves why.”

The “Dogon” are a Malian tribe with a lineage whose rich understanding of advanced astronomy is said to predate modern science. For Americans, they might be the closest thing to real life Wakandans. In fact, Dogon culture inspired Ruth Carter’s Oscar-winning “Black Panther” costume designs.

Additionally, Neptune Frost’s intersexuality is an intentional rankling of the region’s harsh treatment of non-binary Africans via outright anti-gay laws or as taboo at best, exported by American evangelicals.

Central to the broader “MartyrLoserKing” project is a hacker who grew up on a hill where coltan was discovered, and who lives in a self-sufficient, otherworldly electronic waste dump made of recycled computer parts. There, a subversive hacking collective attempts a takeover of the authoritarian regime exploiting the region’s natural resources and its people.

Williams came up with the name “MartyrLoserKing” after hearing a French mispronunciation of Martin Luther King. But there’s more to the title than a slip of the tongue, starting with the end of martyrdom (“I don’t want another person to have to give their life so that we can achieve this or say that”); the opposite of what is typically associated with winning in relation to capitalism (“especially when that winning comes at the cost of you standing on somebody’s neck, but it’s supposed to align itself with the idea of queer, weird, and that’s where the loser ‘motto’ comes from”); and lastly, his idea of a “loser-king.” “To be the king of the weirdos, the one who doesn’t fit in, and he’s okay with it.”

Williams’ 2015 poem “Coltan as Cotton,” which equates the cotton economy that fueled America’s slavery expansion, to the resource that provides the circuitry in every cellular phone, laptop and many other electronic devices, provides early insight into the project’s development.

“My work is dedicated to all the artists who are told they are too weird, too strange, too experimental, too Black, too gay, not pretty enough, not pop enough to matter,” Williams said. “The goal is to transform society through art, to feed the imagination, to challenge apathy and normative thinking.”

His ambition is palpable in “Neptune Frost.” The film may not always be entirely coherent, because it’s brimming with big ideas about how a community connects, how precious resources facilitate that connection, the subjugation of the people and territories where they naturally occur, the disparities in wealth as a result, and more, all in confrontation with the irony of the resource’s purpose of “distributing power” through circuitry.

But the film’s star is its visual design. Its depiction of a futuristic African society is still rare in contemporary African cinema. And because it takes into consideration present-day crises, while the technology is advanced, it’s also somewhat crude, owing to the region’s high rates of poverty, and the electronic waste dump that countries across Africa (and Asia) currently are.

Also especially well-considered are the costumes identifying the various groups that occupy the film’s universe. They are clearly rooted in local culture, with a futuristic utilitarian design.

Responsible for much of the film’s look is celebrated Rwandan designer Cedric Mizero, known for his multidisciplinary work across photography, film, spatial installation, fashion and object. Williams and Uzeyman met the artist in 2016. 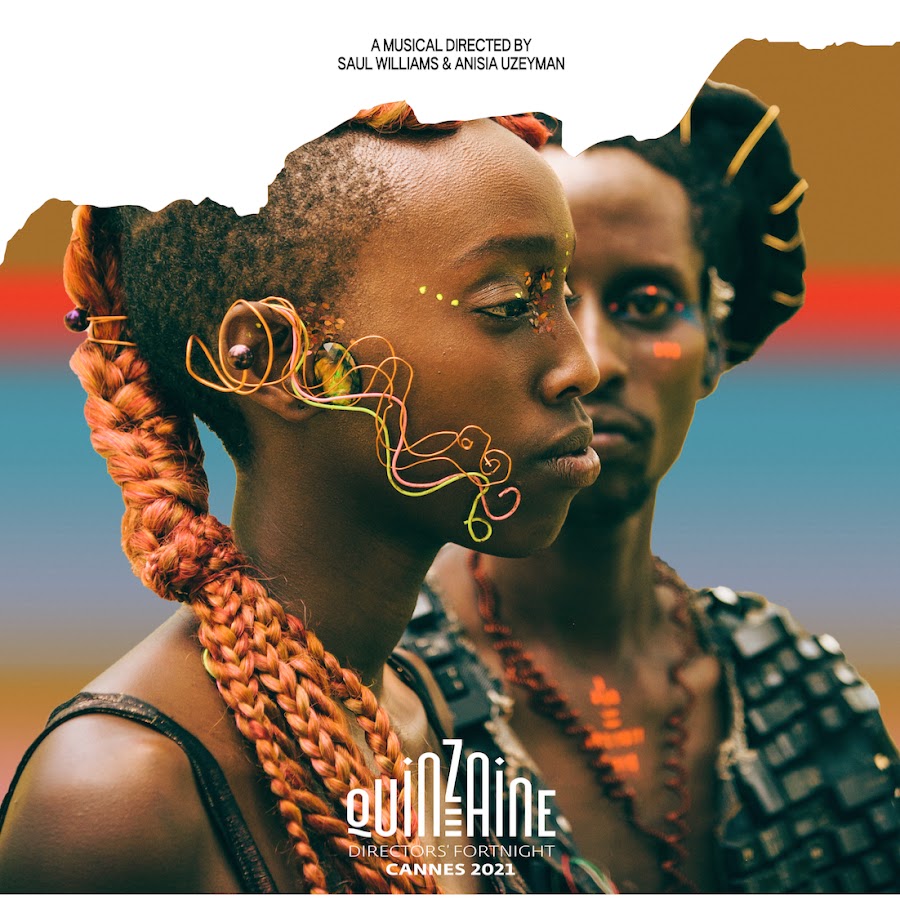 “It was one of those occasions where we spent an afternoon or three talking about what we had in mind, and when he finally brought something to show us, we were blown away,” Williams said. “From that point on, the trust question was out the window, and for everything, it became, ‘Cedric, what do you think we should do?’ because he is just so extraordinary, he and his artists crew. We literally did build that village out of recycled computer parts.”

Idiosyncratic as the film might be, Williams and Uzeyman aren’t concerned about limiting their audience reach with the work. For starters, the intersectionality of the film — technology, music, and fashion — crosses a broad spectrum of people. Tapping into even a fraction of that audience could be considerable.

And then there’s the diasporic angle.

“I’m from a place called Newburgh, New York, and I can’t wait for the kids there to see it, because the dream for a lot of them is, “Yo, I want to go to Africa, man. I’d love to see it’, and this film presents them with a vision,” said Williams. “We’re also very aware that we made it the year that people did not expect a film like ‘Parasite,’ that’s not in English, that’s set in another country, to be able to engage so many Americans like it did, and win the Oscar for Best Picture. Nobody has ever even heard Kinyarwanda. Nobody has ever even heard Kirundi. And these African languages are beautiful. There’s a poetry and musicality that’s universal.”

Up next for the franchise is completion of the graphic novel which tells the same story, but from a different gaze, following the coltan miner, Matalusa’s journey.

There will of course be a soundtrack to the film (“music is a time-machine and this project wouldn’t be shit without the music, because it’s the door hidden within each door”).

For now, the filmmakers are relishing the moment, basking in the afterglow of a world premiere at the most prestigious film event in the world. It’s a wonder that a wormhole of a film like “Neptune Frost” even exists.

“The way we went about independently financing this was to protect its point of view and our independence to tell this story we wanted, and to make sure it got made with an entirely Rwandan and Burundian cast and crew,” said Williams. “Maya Angelou once said that anything an artist writes should be written with the urgency of what they would write if someone were holding a gun in their mouth. The state of the world has my mouth propped open enough to swallow whole timelines.”