The Oscars 2022 has a total of 10 Best Picture nominees, which include the uncommon selection of a non-English language film in the running. Viewers previously criticized the Academy of Motion Picture Arts and Sciences for its lack of diversity, which they continue to strive for in its nominee selections.

The Best Picture nominees include Belfast, CODA, Don’t Look Up, Drive My Car, Dune, King Richard, Licorice Pizza, Nightmare Alley, The Power of the Dog, and West Side Story. Many folks on social media question Adam McKay’s Don’t Look Up earning a nomination. Otherwise, this is a fairly impactful selection of nominees. 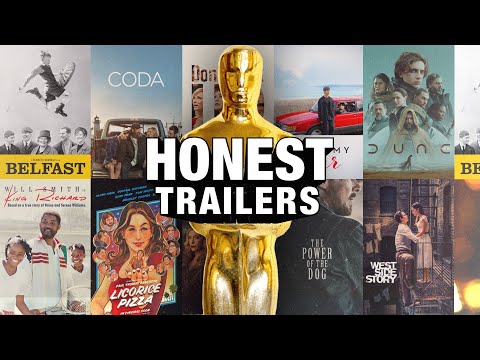 Honest Trailers is a comedy series made by Screen Junkies. They satirize movies and television shows through short videos that act as a parody of the editing and style of trailers. Most recently, they made a video about the Oscars 2022 Best Pictures nominees that they call “hyper-specific” genre films.

The video jokes about the ceremony itself before it digs into the films themselves. The first movie is West Side Story, which jokingly changes the title to Tony-O & Juliet. Steven Spielberg’s musical is an adaptation of the original stage play that is based on William Shakespeare’s play.

Next, Honest Trailers digs at The Power of the Dog, explaining how homophobic bullies generally turn out to secretly identify as LGBTQ themselves. Honest Trailers also makes jokes about the film’s visual symbolism that pushes this narrative.

Guillermo del Toro’s Nightmare Alley is up next, joking about how Bradley Cooper is oddly seen as a much younger man throughout the duration of the film. The YouTube video calls the film Exit Through the Grift Op.

Honest Trailers digs at Drive My Car for its sob story and its plot about “a bunch of Japanese people who know way more about Western literature and philosophy than you do.”

The next film is King Richard, which is compared to films that push talent too far for a specific craft. Honest Trailers makes fun of the “narcissistic” title character and calls the film Served Outta Compton.

The YouTube channel already posted a video of Dune, so they take this time to talk about Euphoria.

Honest Trailers points out that Licorice Pizza filmmaker Paul Thomas Anderson regularly sets his films in California’s San Fernando Valley. However, they also make fun of the age gap between its leads.

The next Oscars 2022 Best Picture nominee is Belfast, which is also a nostalgia piece. Additionally, the video jokes about Jamie Dornan being, “the Fifty Shades of Grey guy with actually good acting.”

The last Oscars 2022 Best Picture nominee is Don’t Look Up. The YouTube channel jokes about its odd statement on climate change that “takes aim at everyone from daytime TV hosts to pop stars to the president’s dumb kid without alluding to the oil industry.”

The Oscars 2022 Best Picture race is close. Many awards season analysts are trying to guess what could take home the biggest prize of the night. They generally look at winners of the WGA Awards, PGA Awards, and SAG Awards. The Power of the Dog dominated many conversations earlier in the season.

However, CODA took home several unexpected wins, such as the ensemble award at the SAG Awards. As a result, many folks are expecting to see the Apple TV+ film take home the Best Picture win. Nevertheless, it will be a tight race.