Presenting: Your Official Guide to Zach Shallcross’s Season 27 of ‘The Bachelor’

After Rachel Recchia revealed her “concerns with the age part” of her ’ship with Zach Shallcross resulting in his ultimate exit from The Bachelorette season 19, my favorite person ever, Reality Steve, revealed that not all hope was lost for Zach…because the tech executive would probs be the next Bachelor!

(SPOILER): As we know plans can always change last minute, and it won’t be “official” until next Tuesday on the ATFR, but I feel confident in reporting that the next Bachelor is going to be Zach Shallcross. pic.twitter.com/jnh4zY2hci

And, as usual, Steve proved to be right when Zach’s Bachelor casting was announced by host Jesse Palmer during Tuesday’s live After the Final Rose special. Now that we’ve all collectively recovered, it’s time to get into everything we can expect. The new Bachelor season is not set to air until January 23, 2023 but we already know *tons* of intel, so here’s what ya need to know—you’re welcome!

According to Reality Steve, two of the women who will be appearing on this upcoming season “definitely have a past with each other.” *cue the dramatic music* And just who would these two contestants be? Glad you asked:

Cat Wong, 27, New York, NY. (IG: kitty_cat20_). Model. Also attended U of South Carolina at same time Davia did, and competed against her for Miss South Carolina in 2018. You can bet your ass that will be brought up this season. pic.twitter.com/EA4ucKzfJf

Apparently, both Davia and Cat attended the University of South Carolina at the same time and *also* competed against each other for Miss South Carolina in 2018. Real life footage of the Bach producers whipping up this storyline:

The Bachelor starts filming next week

Reality Steve added in one of his most recent Zach Bach posts that filming is set to begin on Monday, September 26, which means we “should be getting the list of potential women on the Bachelor Facebook page for his season sometime later this week.” BRB, reactivating my very dead, very dated Facebook account because I cannot miss out on getting the intel.

We have a premiere date!

Zach’s season of The Bachelor will premiere on January 23, 2023 at 8 p.m. ET on ABC! Yes, that *is* just over four months away. But no, you don’t have to wait that long to get your drama fix on because Bachelor in Paradise is set to air its first episode Tuesday, September 27 on the network!

Zach is VERY ready to be the Bachelor

Though he didn’t wind up finding love on Gabby and Rachel’s Bachelorette season (womp womp!), Zach is already looking forward to making up for it as the new lead of the show. “I really needed to take some time away and reflect and heal that broken heart,” the former college football player told host Jesse Palmer during Gabby and Rachel’s After the Final Rose special. “What I learned from that experience was, it didn’t change how ready I was. I am now more ready. That was fuel to the fire. I am ready to find my person, my best friend.” Oh, that? Just some dust in my eye, thank for asking! *bursts into tears*

Zach has already met five of the women on his season

In some pretty !!!!! news, the newest Bach got to meet five of the women hoping to win his heart during the live TV special. Ahem, presenting: Brooklyn, 25, Brianna, 24, Bailey, 27, Cat, 26, and Christina, 26. The entire group was introduced to the tech executive in front of a fitting backdrop featuring a pic of the Bachelor Mansion. Not only has this mini intro legit never been done, but…

Someone already got the first impression rose

Now that the bombshell has been dropped, let’s get into the deets! Once Zach met five of the women set to be a part of his upcoming season, it wound up being Brianna who stole the show in the best way possible. The New Jersey resident took a selfie with him in front of the Bachelor Mansion backdrop and said, “I wanted to do something special for us so we would always remember this,” before they snapped the sweet photo. “It’s a little something for you to remember me by, and I’ll see you at the mansion soon.” Notes = taken! 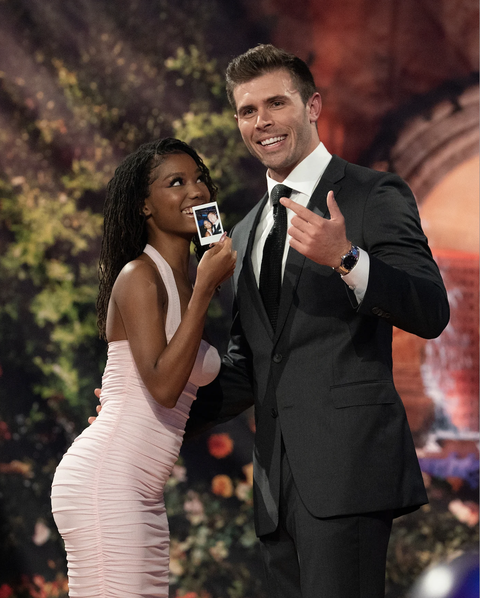 Her truly *chef’s kiss* move won the California native over, and not only did he keep the pic in his suit pocket, but he handed her the First! Impression! Rose! Of! The! Season! As a result, Brianna will be safe from elimination when she and the rest of the women make their entrance at Bachelor Mansion on the first night.

We know what he’s looking for

In a recent interview with People, Zach dished on the kind of person he hoped to find on his Bach journey, and the answer is sweet: “First is how kind and compassionate they are. I think that’s something that’s pretty rare nowadays. Growing up with an incredible mother…She’s a special needs teacher and she lives a very stressful life. She cares for everyone around her and she would take the shirt off her back and give it to anyone. And that’s something I’m looking for, is someone that is kind and compassionate to everyone they come in contact with.”

Jesse Palmer will be back to host

Honestly, kind of love him so not mad about it ¯\_(ツ)_/¯. And if you wanna know all the 🍵on the former pro footballer, head right on here:

And that’s all we know so far, team! Be sure to check back on this story for updates as more info emerges.