Home Secretary Priti Patel warned the European Union the Conservative Party will continue to act on the manifesto pledge to deliver Brexit despite the threat of a no deal. Negotiations with Brussels have soured after the introduction of the Internal Market Bill in the Commons last week, a move the EU has claimed threatens the withdrawal agreement struck with the UK in January 2020. Speaking to BBC Breakfast, Ms Patel said: “There are important points to make about the Internal Market Bill but also about the approach that we are taking as a Government.

“When it comes to preserving the integrity of the United Kingdom and, clearly, delivering for the people of Northern Ireland on the Belfast Agreement, we’ve said from day one, we said when the Withdrawal Agreement Act was verified and went through Parliament, that we will always stand by our word and not compromise when it comes to unfettered access of goods and services but also standing by the Good Friday Agreement.

“We are ensuring that the Internal Market Bill stays true to that principle and that is why we are bringing this bill forward.”

She continued: “To make it absolutely sure we have the safety net and the safe guard in place.

“That is also in line with our manifesto commitment so there are no anomalies there whatsoever.

JUST IN: EU explodes in angry response to Boris victory – ‘Trying to blame us!’ 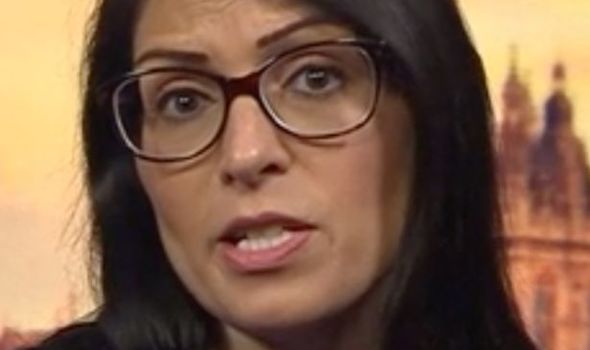 “We only had the second reading in Parliament, obviously this will go through committee stages through the House of Commons.”

She also reminded colleagues, many of whom expressed unease with the idea of supporting the controversial bill, they had been elected on a pledge to deliver Brexit and protect the integrity of the UK.

The Home Secretary said: “The Conservatives MPs were elected on that manifesto to deliver for the people of Northern Ireland, to protect the integrity of the United Kingdom and also to fulfill that promise to get Brexit done.

“We are still in negotiations with the EU, we want to hope to get the right outcome but it’s right that we have this safety net to protect the integrity of the United Kingdom.”