The Bachelor star Matt James was excited when he was announced as the next lead Bachelor for the 2021 season.

He left his hometown back in September, so he could go into quarantine prior to his women arriving at the resort in Pennsylvania.

For weeks, he has filmed his season of the show but because of COVID-19 and the closed set, we don’t know much about what has been going on behind the scenes.

However, Reality Steve is now revealing that the show has reached a big milestone.

Matt James’ season of The Bachelor has ended

Matt’s season of The Bachelor has concluded.

Right now, we don’t know whether he’s engaged, in a relationship, or coming home a single man.

“You’ll see Matt’s women are starting to come back online the last 24 hrs. As I reported a couple of wks ago, plenty of them have been home for a while but didn’t touch their social media, which was mandated by the show until Nov. 23rd. That’s why you’re seeing activity now,” Reality Steve revealed on social media.

“Filming ended this week. When you find out what happened, I’ll let you know.” 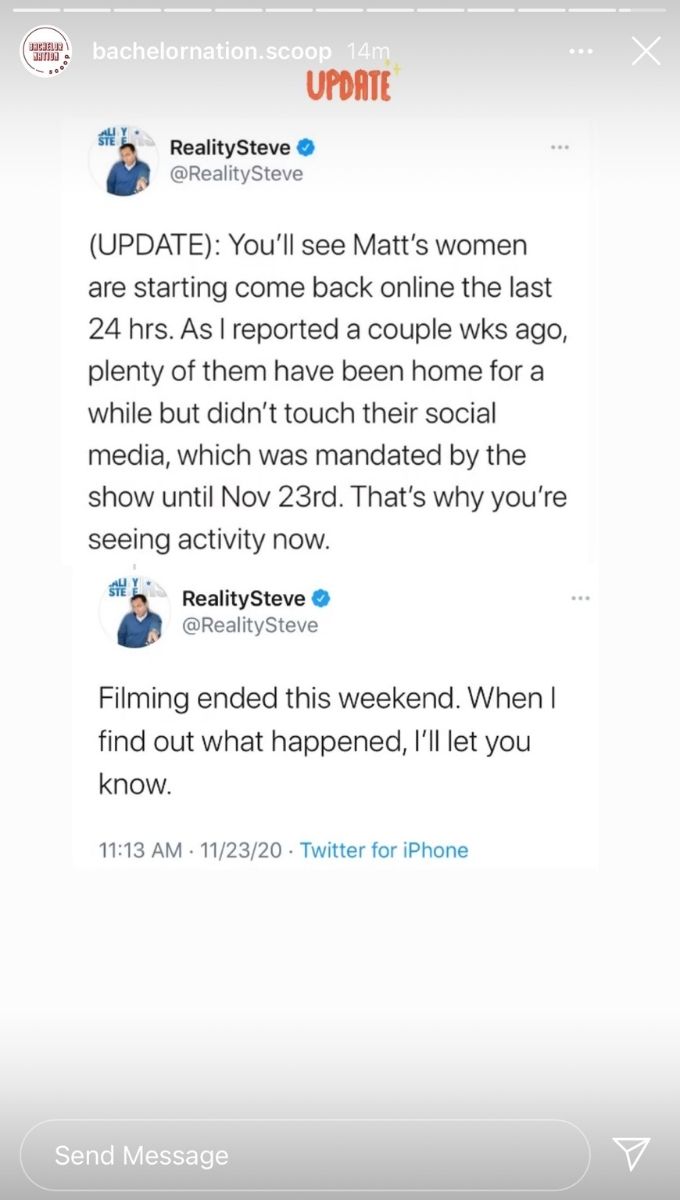 The winner could have gone live on social media yesterday along with the rejected women.

ABC released a trailer last week for Matt’s season. In the trailer, Chris Harrison joked that the women were literally falling for Matt after a woman lost her balance in front of Matt when she met him.

We know that Matt has never been in love as he told Chris that he had never had those feelings, but he was excited to find a potential wife.

He had previously told Tyler Cameron that he was coming back with a wife. Tyler was close to getting engaged himself on The Bachelorette.

Tyler seems fed up with Tayshia’s season of The Bachelorette and he wants The Bachelor with Matt to air. He’s excited to see Matt’s journey on the show. Even though they are best friends, he may not have any idea what is going on with his friend. He could be engaged and Tyler would have no idea.

The Bachelorette airs Tuesdays at 8/7c on ABC.