In the wake of redefining the measurement of binge-watching on streaming, Netflix’s new top 10 film chart for the week of Nov. 8-14 lists Rawson Marshall Thurber’s $200M action feature Red Notice as the No. 1 film for the period with 148.7M hours watched since Nov. 12; easily the most watched movie ever on Netflix for a pic in its first weekend.

We reported yesterday that Samba TV clocked 4.2M U.S. households who tuned into the Dwayne Johnson, Gal Gadot, Ryan Reynolds movie for at least five minutes, more than any Disney+ movie to date and HBO Max theatrical titles in their respective weekend debuts.

There was also some Johnson spillover in the top 10 from Red Notice with the first weekend of Sony’s Jumanji: The Next Level on Netflix which notched 10th place with 6.76M hours watched.

Also breaking into the top 10 were the streamer’s British comedy holiday movie Father Christmas Is Back with 13.78M hours. The movie directed by Mick Davis and Philippe Martinez stars Elizabeth Hurley, John Cleese and Kelsey Grammer and centers around four sisters who have re-united for the Christmas Holiday in a Yorkshire mansion with misunderstandings that uncover the long-buried secret that tore their family apart, so many years ago. 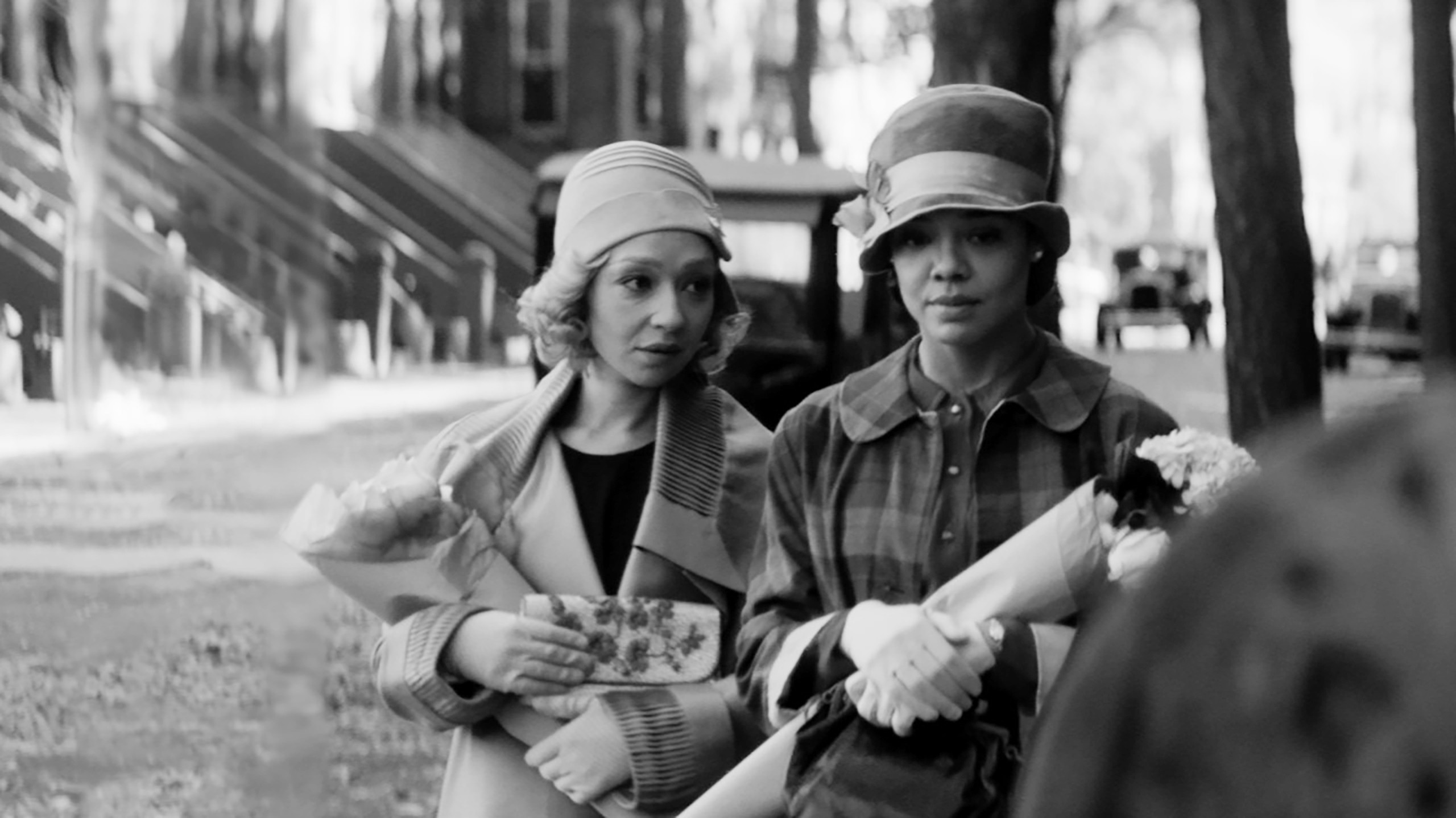 Also debuting in the top 10 movies for the week on Netflix is their $15M+ Sundance acquisition Passing starring Tessa Thompson and Ruth Negga which ranked No. 8 with 7.49M hours.  The Nicolas Cage action movie 211 also pushed its way onto the list with a first week of 7.9M hours watched.

You have to hand it to Netflix: As Oscar season ramps up, their top 10 charts are another means of boosting how popular their contenders are. It’s a great marketing device as streamers push their way into the feature awards race and content creators will relish this. Netflix has the advantage over its rivals as they’re being completely transparent with their viewership data. Not only that, but frosh streamers such as HBO Max, Paramount+ and Peacock are still young in their global footprint, and don’t have the viewership wattage to boast like Netflix is doing here. An apples-to-apples comparison for them all is still years away. Getting a great boost here is the second week of Jeymes Samuel’s western The Harder They Fall with Jonathan Majors, Zazie Beetz, Regina King, LaKeith Stanfield and more. Heading into the holiday period, there’s an embarrassment of riches ahead for Netflix with Lin-Manuel Miranda’s tick, tick…Boom!, Adam McKay’s all-star Jennifer Lawrence-Leonardo DiCaprio comedy Don’t Look Up and Paolo Sorrentino’s The Hand of God. Earlier this year the streamer laid out a plan to roll out a new movie a week. 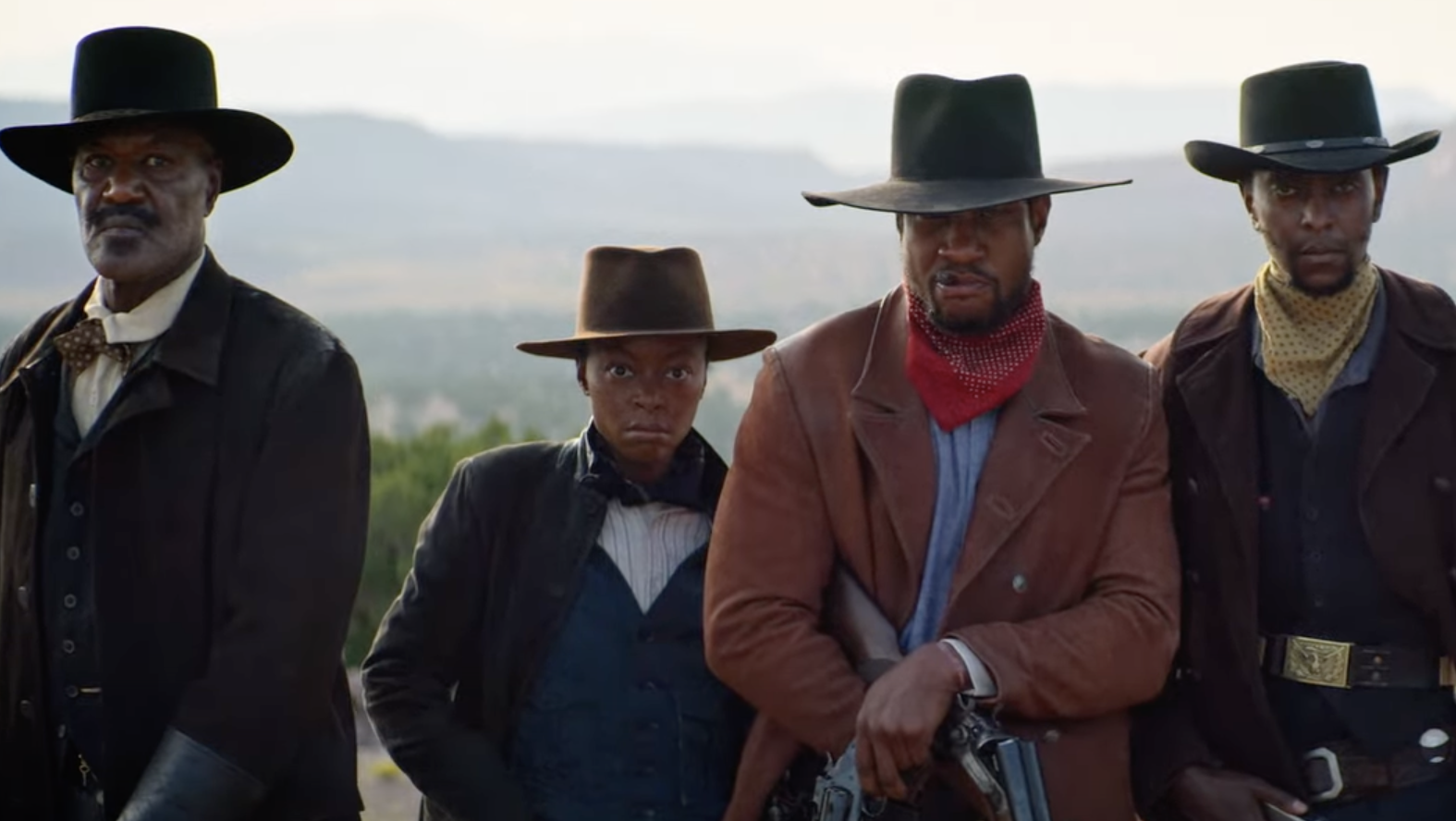 Another interesting dynamic to the most watched movies on Netflix is how it’s teflon proof when it comes to Rotten Tomatoes. While Rotten Tomatoes can feasibly deep-six a movie’s prospects at the box office, there’s no dollars lost when watching a film (or TV show) on Netflix. Red Notice was panned by critics at 35% Rotten, worse than Johnson’s previous collaboration with Thurber, Skyscraper at 48% Rotten which was a box office misfire at least stateside in 2018 with just over $68M, however with better overseas prospects with $304.8M WW. Netflix awards bait titles Passing and The Harder They Fall are well reviewed respectively at 91% certified fresh and 87% certified fresh.

Here’s the most recent chart of the top ranked English Movies on Netflix: 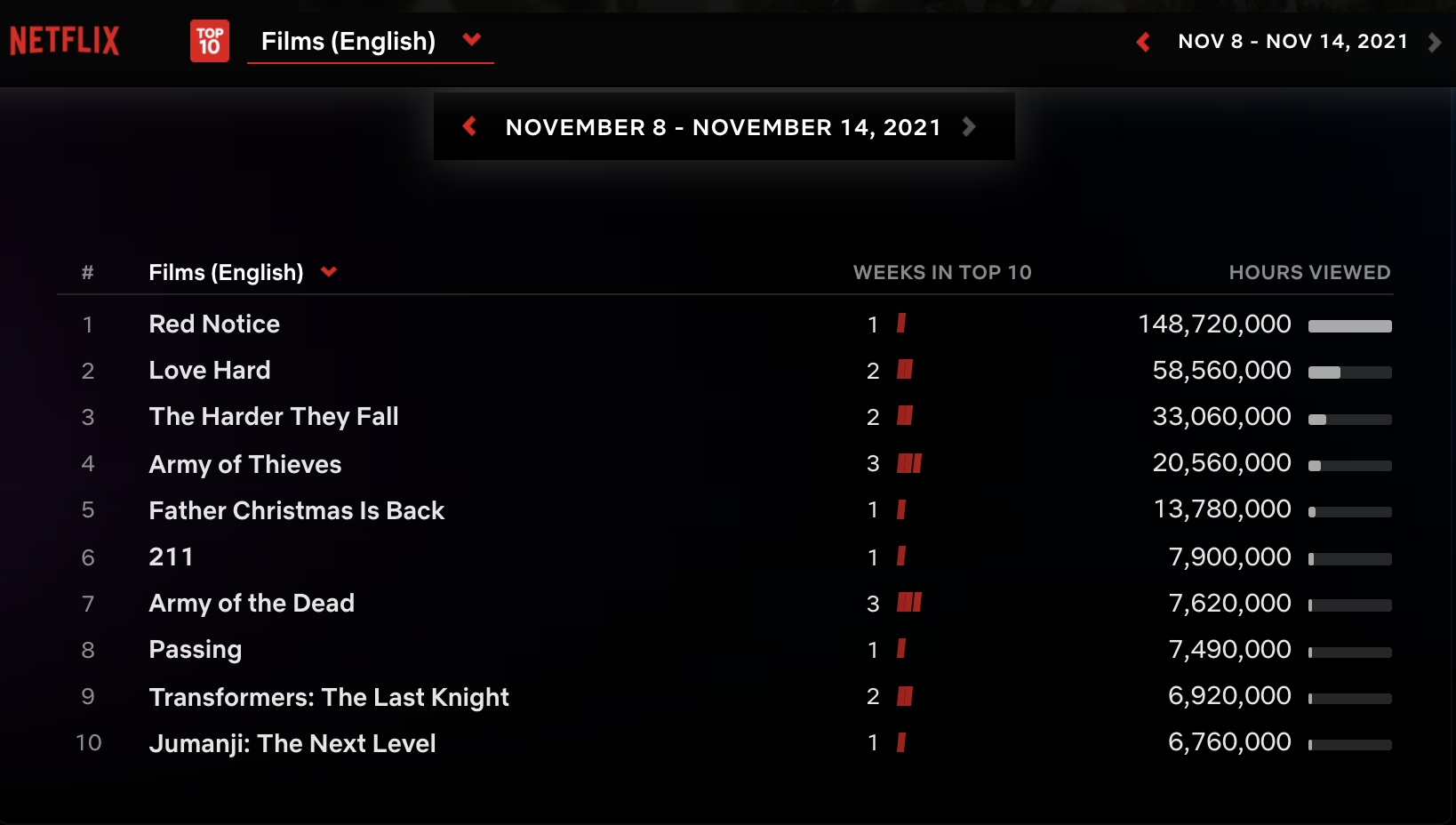 Note, Netflix counts all hours watched by a subscriber account. So if a subscriber watches a two hour movie, three times, that equals 6 hours watched for that particular title. The old means of clocking the most watched series by global TV households which tuned in for two minutes or more; that metric has been abandoned by the streamer with weekly hours watched the new standard. Next week, the chart resets the clock for each title ranked. The week’s most watched movies (English and non-English) and TV series (English and non-English) will be published by the streamer every Tuesday.

In regards to a cumulative all-time chart of the most watched movies, Netflix will update that list on an as needed basis, however, its basis will be the most hours watched in a film’s first 28 days. Expect Red Notice to join that list soon. For the time being, the Sandra Bullock 2018 thriller Bird Box remains the most watched Netflix English-language movie through 28 days with 282M hours watched. Here’s the all-time list below: 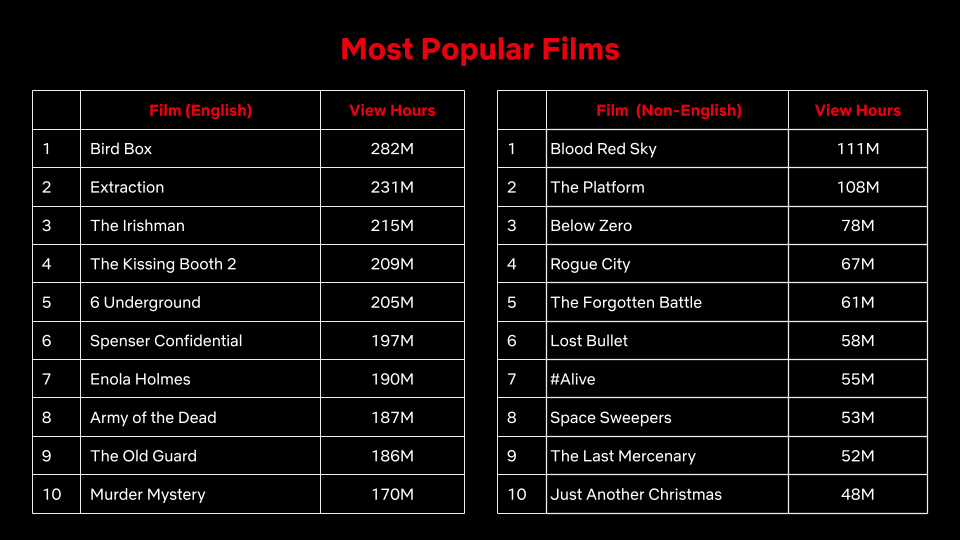 Among the top Non-English movies on Netflix for Nov. 8-14, Italian crime thriller Yara from director Marco Tullio Giordana tops the list in its second week on the service with 17.95 hours watched. Yara follows a determined prosecutor who becomes consumed with the case of a missing 13-year-old and goes to extreme lengths to get to the truth.

Brazilian movie 7 Prisoners which won the Sorriso Diverso Venezia award at the Venice Film Festival ranks second this past week in its debut week with 9.69M hours watched. From director Alexandre Moratto, 7 Prisoners follows 18-year-old Mateus who accepts a job in a junkyard in São Paulo for his new boss, Luca, but becomes trapped in the dangerous world of human trafficking. 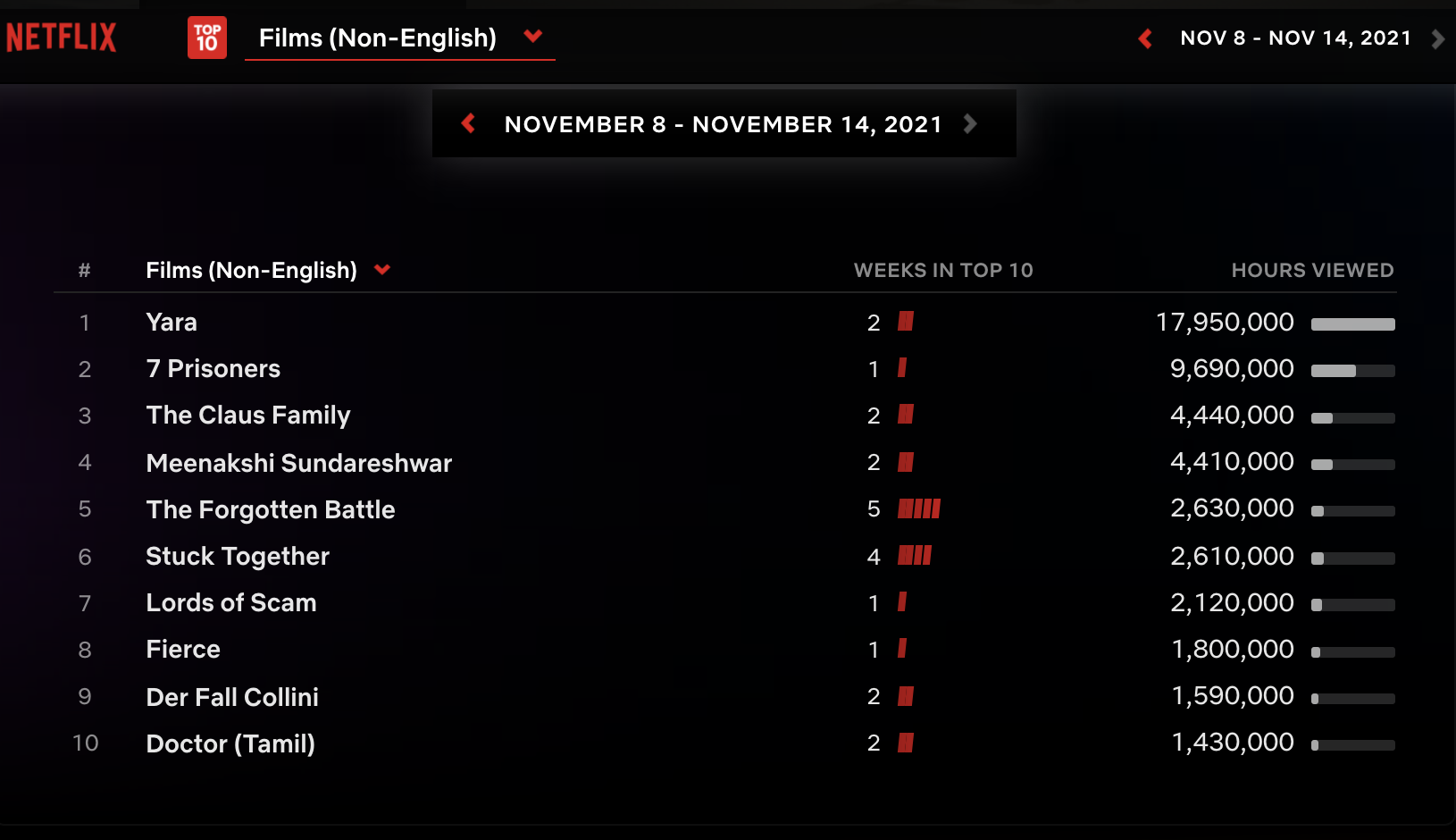 Also breaking into the above chart in its first week is the French documentary Lords of Scam from Guillaume Nicloux which traces the rise and crash of scammers who conned the EU carbon quota system and pocketed millions before turning on one another. There’s also the Polish musical comedy Fierce from Anna Wieczur-Bluszcz about a gifted young singer who becomes an instant sensation on a popular talent show. However, her real goal is earning the love of her father, a member of the jury.