Leah McSweeney is getting in the last word when it comes to her unexpected feud with The Real Housewives of New York City alum Heather Thomson. The two women found themselves at odds before ever really meeting, with Leah taking issue with comments Heather made on her podcast about the other women of RHONY before returning to the show in season 13. Leah confronted Heather with those comments (including allegations of drug use and being disingenuous) during a girls’ getaway in the Hamptons, leading to an on and off-camera back and forth between the pair. Things came to a head in the last couple of weeks, as Heather embarked on a press tour of sorts to promote her brief return to the show (including with ET).

“I am seeing a narrative emerge that I’m not comfortable with and thus feel the need to speak out,” Leah writes in a two-slide story posted to her Instagram account. “Heather was unable to forge natural connections with any of the women and that is why she discontinued filming. Everything that she’s been saying about me in the press these last few weeks bears no resemblance to reality.”

“I took issue with her from the beginning because I’m not a fan of disingenuous people,” she continues. “She says one thing in the press and another to people’s faces. Say what you mean, mean what you say. I never once lied to her or about her.”

“It’s no secret that I was having a hard time on this trip due to a tremendous personal loss that I was dealing with in real time,” Leah notes, referencing the death of her grandmother during the trip. “Heather was well aware of this and acknowledged it. I apologized to everyone for being aggressive and squashed it, including with Heather.”

“To now have her out in the press spinning lies about me while openly attacking my mental health and sobriety journey and falsely accusing me of assault is wrong, dangerous, inappropriate and a sad attempt to save face simply because she couldn’t hang/cut it on the show,” Leah says. “You will see all of this play out in the coming episodes/see for yourself.” 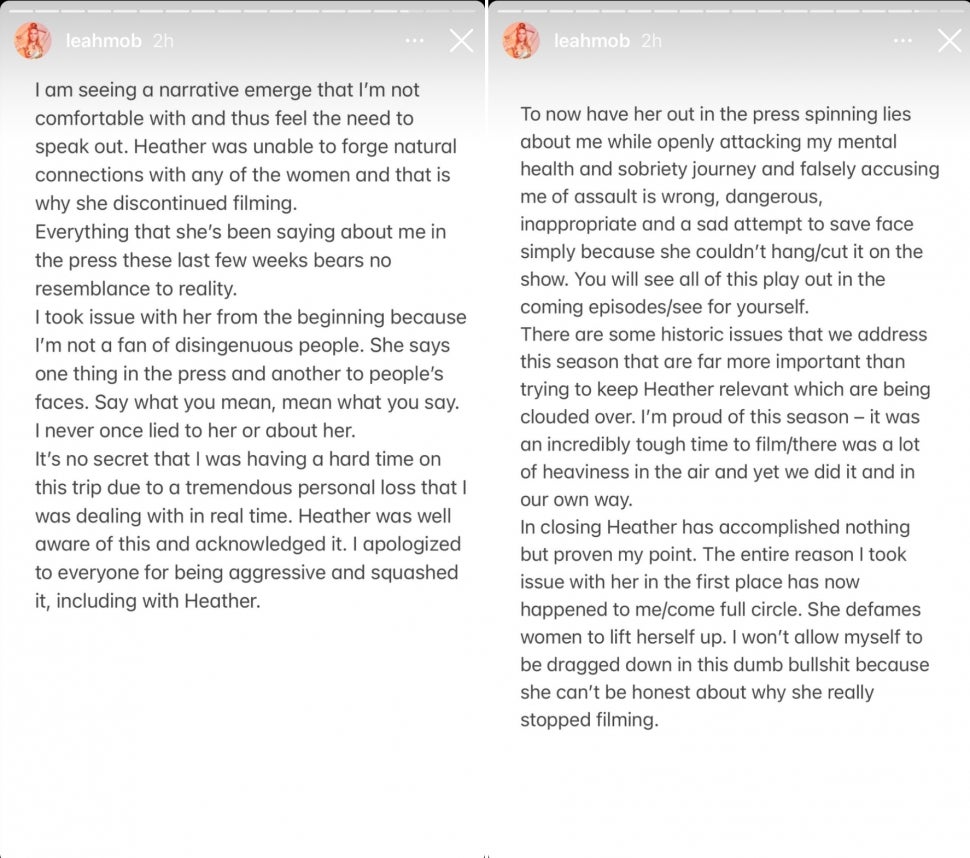 Ahead of her return airing on TV, Heather claimed on the podcast Friends of Dorothy that she was “assaulted” while filming, and hinted it was Leah who assaulted her. When ET pressed Heather about what she meant by assaulted, she simply offered a “wait and see.” She did, however, say she was unaware of Leah’s struggles. “I didn’t know about any of her issues that I know about now, or the things that she’s been trying to overcome and struggle with,” Heather offered. “I wish her the best on, on that journey.”

“There are some historic issues that we address this season that are far more important than trying to keep Heather relevant which are being clouded over,” Leah adds in her post, referencing overdue conversations around race among the historically white cast. “I’m proud of this season — it was an incredibly tough time to film/there was a lot of heaviness in the air and yet we did it and in our own way.”

When news of Heather and Leah’s feud first hit the fan blogs, Leah shared a lengthy, cryptic story that read: “I don’t like women who slut shame other women, act morally superior to other women, plastic surgery shame other women, gossip about other women doing drugs when you know damn well they’ve done drugs also. And lastly, I don’t like when white women call black women articulate, especially while acting like the queen of wokeness.” 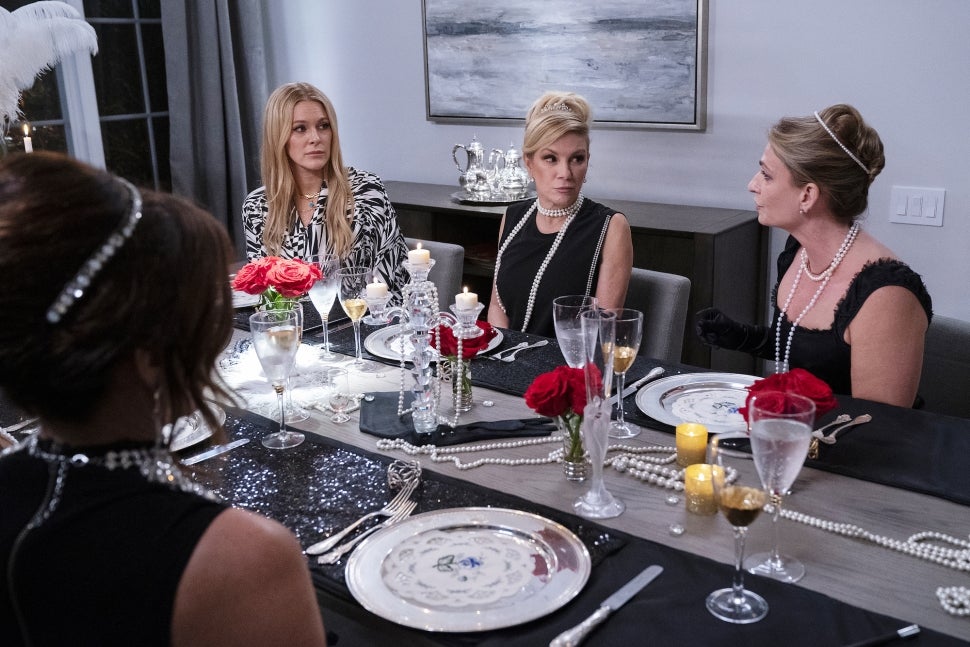 Heather called the post “projection,” telling ET, “There’s a lot of ways I would describe me. I would never use the word ‘woke’ to describe myself. Like I said, I feel like she’s describing herself. That really has nothing… I don’t fit into any of that description. I’ve never done those things. So she’s putting it in a grinder and making it into something that she wants. I think she wants to put her kind of stake in the sand so that she has her flag to stand by. But it’s droopy and it ain’t no wind.”

“In closing, Heather has accomplished nothing but proven my point,” Leah caps off her post. “The entire reason I took issue with her in the first place has now happened to me/come full circle. She defames women to lift herself up. I won’t allow myself to be dragged down in this dumb bulls**t because she can’t be honest about why she really stopped filming.”

Heather told ET she planned to stick around for all of season 13, but wound up opting out of the experience after just the one weekend away with Leah. “I get 24 hours in the day, just like you do and just like everybody else does,” she said. “When it came to deciding how I wanted to spend that 24 hours after that weekend, it was pretty easy for me to decide it wasn’t with the girls.”

Meanwhile, a source close to production tells ET that the decision to part ways was mutual between Heather and the producers. She was only ever scheduled to film the Hamptons trip, with the option to do more if it felt right for all parties.