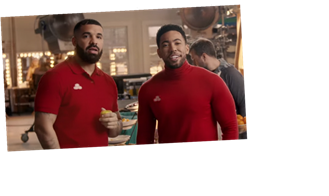 Drake appeared as Jake’s stand-in in the commercial, which also featured Paul Rudd, as well as Aaron Rodgers and Patrick Mahomes. The NFL stars complained about their lack of lookalike stand-ins on set, as Jake pointed out he didn’t have one.

“Hold on, is that Drake?” Mahomes asked.

Drake and Jake then practiced their lines — before Jake reminded Drake stand-ins don’t actually have any.

Drake isn’t the only star to make an appearance in a commercial during the Big Game. Check out ET’s round-up of more high-profile Super Bowl TV spots.

Super Bowl LV airs live on CBS and CBS All Access on Sunday, Feb. 7. Kickoff is at 6:30 p.m. ET. Additionally, you can follow CBS Sports’ live blog and stream the game for free on CBSSports.com and on the CBS Sports app on your mobile device. Hear more in the video below.