The image of thousands of tourists clustered around the picturesque beaches of Tel Aviv-Yafo would be a perfectly-framed postcard were it not for the roar of fighter jets streaking past.

The spectacular display by Israel's Air Force, to mark the country's Independence Day, came on the eve of the Eurovision Song Contest, a six-decade old tool of soft diplomacy which has lately found itself caught in a political tug of war. 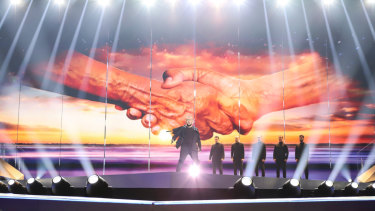 "We still believe that we can bring this critical conversation, or make awareness of the situation here, with our message and with our agenda-setting powers and hopefully we will make awareness to the world through Eurovision," Hannigan said.

After the confirmation of Israel as a host country last year, the activist group Boycott, Divestment and Sanctions (BDS) launched a campaign to boycott the event, saying it would be used to distract from Israel's treatment of Palestinians in the West Bank and Gaza. 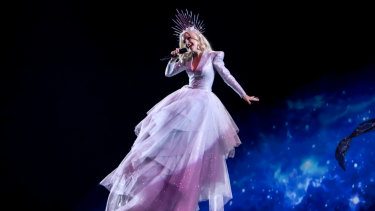 Australia’s Kate Miller-Heidke on stage for the first rehearsal of the 2019 Eurovision Song Contest in Tel Aviv, Israel. Credit:Thomas Hanses.

In response, a letter signed by more than 100 artists, including actor Stephen Fry, talk show host Sharon Osbourne and rock singer Gene Simmons, was released defending the staging of the event in Israel and urging what amounted to a boycott of the boycott.

"Unifying events, such as singing competitions, are crucial to help bridge our cultural divides and bring people of all backgrounds together," that letter said. "We believe the cultural boycott movement is an affront to both Palestinians and Israelis who are working to advance peace through compromise, exchange, and mutual recognition."

Fuelling the BDS movement, which is in effect playing a game of public relations Battleship with Israel, are a handful of past wins, including the cancellation of a concert by the New Zealand singer Lorde and a soccer match between Argentina and Israel.

Less successful has been the campaign to pressure US pop singer Madonna, who is scheduled to perform at next weekend's Eurovision grand final, into cancelling.

Only two countries are absent from this year's competition: Bulgaria, whose public broadcaster BNT withdrew on financial grounds, and Ukraine, whose chosen artist Maruv withdrew after the Ukraine government asked her to sign a "participation agreement" preventing her from performing in Russia.

Summing up the sentiment of many artists who have found themselves caught between clashing political ideologies, she said: "I am a musician, not a puppet for the political arena."

But last year's winner Netta Barzilai said this week that a boycott of Eurovision would run contrary to its values.

"It shouldn't be political, it's a disaster if it will be," Barzilai added.

In a curious twist, Barzilai was herself accused of politicising the competition when, in the wake of her win last year in Lisbon, and before a host city had been selected by organisers, she proclaimed: "Next time in Jerusalem."

The Eurovision Song Contest, despite its superficial layer of kitschy retro Euro-pop, is one of the most powerful tools in the soft diplomacy toolbox, created in the wake of the World War II as a means of uniting a continent which had been fractured and scarred by conflict.

First staged in Lugano, Switzerland, what was then called the Grand Prix Eurovision de la Chanson Européenne involved just seven countries. Since then it has grown exponentially. And in 2015, in a demonstration of its diplomatic reach, Australia was invited to compete.

Though Israel has hosted the competition twice previously, this year's competition comes as the relationship between the region's stakeholders could be described as jagged at best, made all the more unsteady by disruptive politics and shifts in government around the world.

Israel's two previous turns as Eurovision host, in 1979 and 1999, took place in the wake of the Egypt–Israel Peace Treaty and the Oslo Accords respectively. In 2019 the competition is turning the spotlight onto a far less certain stage.

Michael Idato travelled to Tel Aviv as a guest of SBS.