Any time a guy in a fancy coat says, “I’ll go ahead and explain. I’m a businessman,” it’s safe to assume you’re in for a parade of cliches. Or it would be, if the malicious parole officer and cancer patient wife weren’t already a dead giveaway of the kind of humorless melodrama on display in “South of Heaven,” a cloying clunker of a dramatic thriller starring Jason Sudeikis and Evangeline Lilly. It’s too bad that television’s favorite nice guy had to hone his Southern accent in such a dirge of a crime drama — it makes his dopey ex-con Jimmy feel like Ted Lasso’s charmless no-good cousin.

Filming for “South of Heaven” took place in March 2020; just before the pandemic upended the movie business (and everything else), and a few months before the first season of “Ted Lasso” debuted, which soon became an Emmy-winning hit. Had Sudeikis known what success lay in store for him, he may not have chosen to align himself with such an obvious lemon. The only bright spot about the odd timing of “South of Heaven” is that it’s so obviously a relic of pre-pandemic Hollywood, one that hopefully will stop making lifeless thrillers full of hackneyed dialogue and formulaic action.

“South of Heaven” opens with a somber monologue at Jimmy’s (Sudeikis) parole hearing, in which he explains why he won’t give the speech he prepared before delivering a very prepared-sounding speech. His wife, his woman, his dear sweet kind little lady, is dying of lung cancer, ya see, and all she ever wanted was a white wedding. Being a white man in the South, Jimmy makes parole, and is released into Annie’s (Evangeline Lilly) waiting arms, her hair in a close-cropped pixie cut to signal: cancer.

Annie’s terminal diagnosis motivates much of the film, and constitutes her entire personality. When she muses that she’ll have to pick her wedding song and her funeral song at the same time, Jimmy objects to such gallows humor from his darling angel. “It’s my funeral and I’ll cry if I want to,” she sings, which even Sudeikis and Lilly cannot wrestle into a sweet moment instead of a superbly weird one. 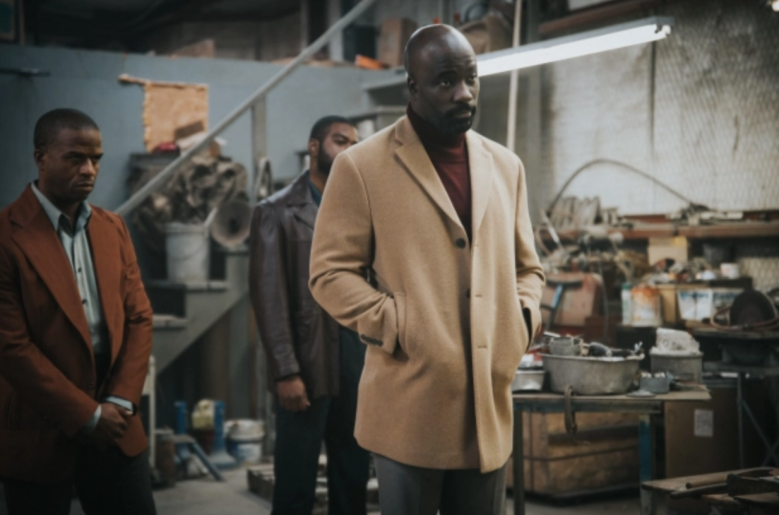 “South of Heaven” features two villainous archetypes: Shea Wigham as Jimmy’s slippery parole officer, who frames Jimmy into ferrying a package for him on a job. Curiously named Schmidt, he’s a little too friendly to Annie as he saunters around in his wide-brimmed cowboy hat, helping himself to her chocolate cake. Though Schmidt is set up as an intriguing enough foil, the focus unexpectedly shifts to Whit Price (Mike Colter), a local kingpin of undisclosed criminal activity. When Jimmy’s job goes awry and he ends up five hundred grand in the hole to Price, it leads him on a slowly unfolding goose chase with unintended consequences.

Price is the businessman with the staid introduction, a thinly sketched garden variety villain who favors trite platitudes like “Don’t forget to take out the trash.” His goons favor a nail gun to the hand or a quick neck slashing, though the stakes feel surprisingly low even with those few violent outbursts. Once his son comes into the picture, and he connects with Annie over her illness while holding her hostage, Price is very quickly humanized, defanged before he really showed his teeth. Part of the reason might be that the “Luke Cage” star can’t help but exude reluctant good guy energy.

“South of Heaven” was directed by Israeli filmmaker Aharon Keshales, who wrote the script with Navot Papushado (“Gunpowder Milkshake”) and Kai Mark. Keshales and Papushado rose to prominence with their black comedy thriller “Big Bad Wolves” (2011), which topped Quentin Tarantino’s list of best movies that year. Both less brutal and more serious, the duo seemed to have stripped “South of Heaven” of the grit and the humor that launched their careers.

With limited action sequences, the movie never goes full thriller until its inevitable conclusion, which feels muted and incongruous. There are some bloody surprises here and there, but too few to satisfy even the most casual genre lover. The dramatic scenes, plodding conversations about Annie’s illness or Price’s late wife, take up far too much time, sucking all the air out of the action scenes, which feel ornamental in comparison. Wigham is the only actor who seems to be having fun with the overwrought script; but he was born to play smarmy Southern creeps. Everyone else, Sudeikis included, feels way out of their element. When material goes this far South, that isn’t a bad thing.

“South of Heaven” is currently available in theaters and on VOD.