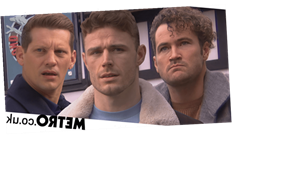 PC George Kiss’ (Callum Kerr) villainous nature is put at risk of being exposed in Hollyoaks, as ex Dean (Paul Sloss) returns to the village.

The policeman was thought to be one of the nicest, friendliest and all-round kindest people to ever set foot in the eponymous village, but it soon came to light that this simply wasn’t the case.

After exhibiting some rather questionable behaviour several months ago, he met with ex Dean, and proceeded to make little of him.

John Paul McQueen (James Sutton) still believes his boyfriend to be a good guy, but will he be given reason to believe otherwise in the coming episodes?

He and George return from their little impromptu holiday, setting foot in the village for the first time since the events of New Year’s Eve.

However, George is immediately met with an internal conduct review at work.

Meanwhile, John Paul attempts to make amends with Nancy Osborne (Jessica Fox) regarding him stealing Kyle Kelly’s (Adam Rickitt) watch, but he’s left shocked when he realises that she’s the reason George could lose his job.

Nancy and George argue, but John Paul stays silent — something which leaves the copper seething with rage.

Later in the week, Dean arrives back in the village, and John Paul is left feeling rather concerned as a result.

Courtney Campbell (Amy Conachan) assures him that he’s got no reason to be worried. Goldie (Chelsee Healey), however, feeds his paranoia, while George enjoys making his beau feeling insecure.

Dean later explains how George reduced him to the obsessive person that he’s now become, and we can see parallels between he and John Paul.

Will John Paul come to realise the truth about what his boyfriend is truly capable of?