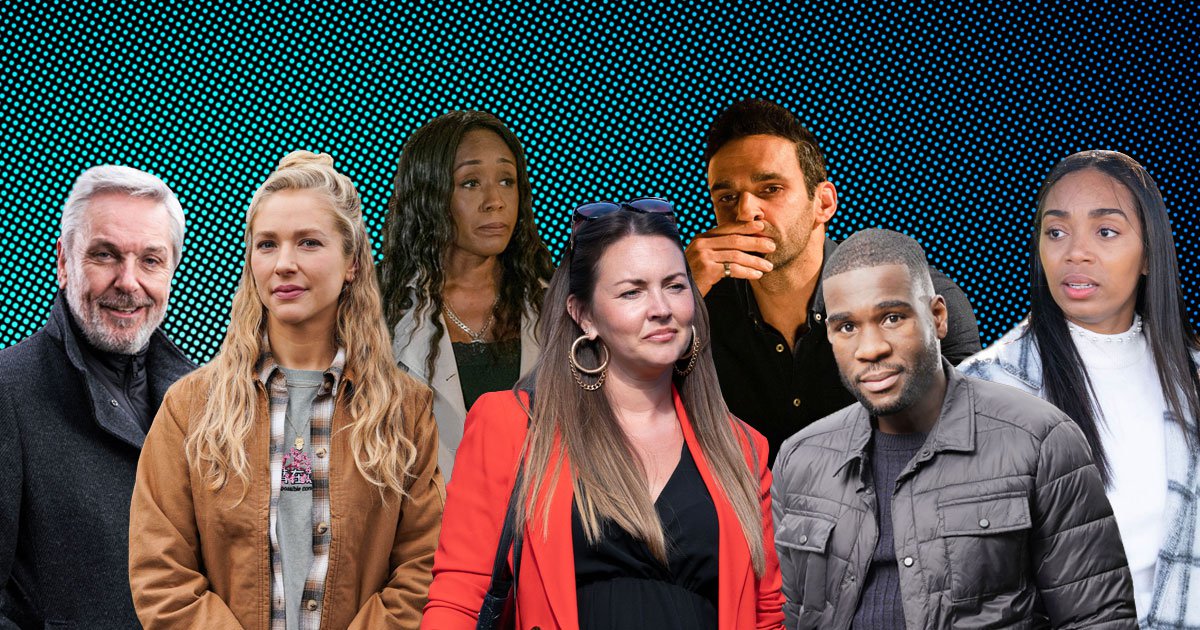 It’s been quite the year for the Walford residents in EastEnders so far. We’ve had secrets being revealed, we’ve waved goodbye to some characters, we’ve seen the end of relationships and the start of some new…quite surprising ones (yes, we are talking about Kat and Phil)…

The next few months are no different as spring in Albert Square sets to be another season of huge storylines.

The Panesars join forces with the Mitchells, there’s some shock announcements, the return of a familiar face and some new arrivals too, so we’re here to bring you the ultimate guide on what to expect in Walford this spring…

It was confirmed back at the start of February that Maddy Hill will be returning to the show to play Nancy Carter.

Nancy has been away from Albert Square for five years, and is now married to Tamwar Masood (Himesh Patel), which of course begs the question of – why is Nancy back?

Speaking about Nancy’s return, executive producer Jon Sen said: ‘There’s a lot of mystery surrounding her return and she’s coming back to a family that have been through a very difficult year – things are definitely not as Nancy left them’

Could her return have something to do with Mick’s (Danny Dyer) abuse storyline?

While we don’t exactly know when Nancy’s returning scenes will air, we do know they will be airing in the spring.

Last year, Sonia attempted to search for her father online, but didn’t have any luck, so she will certainly get a shock when Terry turns up!

Terry is described as the ‘ultimate people pleaser’ and is set to make himself at home in Walford, but what storylines will be in store for him?

Jon Sen recently gave a hint on what to expect: ‘We’ve got some wonderful stories in store for him and can’t wait for the audience to see Brian bring him to life.’

Yes, another new face is set to arrive in Albert Square soon, as James Farrah takes on the role as mysterious Zack Hudson.

Zack is an unpredictable troublemaker who is still suffering from the fallout from a difficult childhood, and his experiences lead him to never rely on anyone or become too attached.

We don’t know an awful lot about Zack, but Jon Sen has already said how ‘trouble is always just around the corner’, so this new face will certainly shake things up in Albert Square.

It was announced recently that we will see a funeral take place soon, as Sharon (Letitia Dean) discovers her dad Gavin (Paul Nicholas) has died.

Gavin was the abusive man who helped fake Kathy’s (Gillian Taylforth) death, but when he returned, he was revealed as Sharon’s father.

It remains to be seen what the reason for Gavin’s death is, but with Sharon and Kathy currently in disagreements over Ian (Adam Woodyatt) going missing, attending the funeral together will either help fix their feud, or just make everything worse.

Away from the casting announcements and funerals, spring will also see us learn more about Isaac (Stevie Basaula).

It’s safe to say we don’t know much about Isaac right now, but a recent scene between him and Sheree (Suzette Llewellyn) hinted at Isaac having something wrong with him, and over the next few episodes, we discover what illness he’s been hiding.

A date with Lola (Danielle Harold) leads Sheree to tell her to back off Isaac, but when the two of them spend time with each other on another date, Isaac decides to reveal his secret, but it leaves Lola shocked.

Just what is wrong with him? And why has he kept it a secret for so long?

We now know he suffers with schizophrenia – but will this put Lola off?

It’s already been revealed that Chelsea was actually planning to set Lucas up in a drugs run in Ibiza, but now Lucas has discovered her plan, he’s also learnt of the severe mess his daughter has got herself into with Caleb (Ben Freeman).

A few weeks ago, when Denise told Lucas about Caleb, he vowed to kill him in order to save Chelsea, but knowing he would go straight back inside if he does kill again, will Lucas eventually go through with his plan?

Time is running out for Gray (Toby-Alexander Smith) as his guilt consumes him after killing Chantelle (Jessica Plummer) and Tina (Luisa Bradshaw-White).

Aside from keeping the fact that he’s murdered two people a secret, Gray is also trying to manipulate Whitney (Shona McGarty) in doing as he says. Unbeknownst to Whitney, Gray’s plan is slowly working, but coming up, he lashes out at her after Whitney tells him his kids are at Denise’s house…aka the same house where serial killer Lucas could show up at any moment.

Gray later apologises to Whitney for losing his cool, but could this allow Whitney to realise Gray is dangerous?

Davood Ghadami’s exit as Kush Kazemi has been on the cards for a while, and despite a gambling storyline, getting arrested and being kicked out of the Slaters home, it’s still unknown on just how Kush’s final scenes will play out.

However, with Kush and Whitney now being in a relationship, if Gray gets jealous, could he kill for the third time and murder Kush?

Alternatively, with Kush’s impending trial, there’s a huge possibility he could face years in prison for his recent involvement in a dodgy crime and taking the fall for a few of the Mitchell’s crimes too.

Another exit from Walford will be Stacey’s (Lacey Turner). Once again, viewers have been aware of Stacey’s exit for a while as Lacey Turner will be heading on maternity leave.

Stacey is currently wrapped up in a feud with Ruby (Louisa Lytton), who is married to Stacey’s ex Martin (James Bye). This feud is spiralling into something that could lead to fatal consequences after Stacey accused Ruby of faking her pregnancy, but after taking a test, the two of them were both stunned when Ruby’s test was positive.

As the aftermath of Ruby falling down the stairs begins soon, Stacey feels terrible about it, blaming herself after they had another argument, but if Ruby wants revenge, could she use Stacey’s guilt to her advantage?

Depending on how determined Ruby is to win this feud, could she accuse Stacey of trying to kill her, resulting in, Stacey’s final scenes being going to prison?

Will Jean tell anyone about her cancer?

Back at Christmas, viewers were devastated when Jean (Gillian Wright) discovered a lump on her breast, and in January, Jean reached a decision to not have any further treatment, following an intense battle with cancer in 2019.

Since Jean recorded a video telling her family she decided against treatment, she has been following in the footsteps of her late partner Daniel (Ade Edmondson) and embracing life, forming a new friendship with Sharon, never being afraid to tell people what she thinks…she even stole chocolate from the Minute Mart!

As Jean continues to embrace life, will she ever tell her family about the fact that she thinks her cancer has returned?

Let’s not forget, Jean left the surgery before her biopsy, meaning she never got a confirmation on whether her cancer has returned, but has convinced herself it’s back, but how long will it be until someone realises Jean is hiding something?

The Panesar family haven’t exactly seen eye to eye with the Mitchells since their arrival, but coming up, they realise they need to make a name for themselves and propose a plan that will see them join forces with the Mitchells.

Kheerat (Jaz Deol) decides to ask Ben (Max Bowden) about his thoughts on becoming partners, but will Ben agree?

If he does, the Panesars and Mitchells could become a powerful force to be reckoned with.

Will Suki continue to interfere with Ash and Peter?

Elsewhere, Ash Panesar (Gurlaine Kaur Garcha) was devastated when Iqra (Priya Davdra) decided to break up with her, but it appears Ash has moved on, as the chemistry between her and Peter (Dayle Hudson) continues to grow.

But, with Suki (Balvinder Sopal) having already flirted with Peter, could she interfere in his relationship with Ash? Possibly create a plan to ensure they never get together?

Suki and Ash don’t get on at the best of times, and if Suki successfully manages to sabotage her daughter’s hopes at a relationship with Peter, it will definitely cause huge repercussions for the Panesar family.

Will Billy ever accept Jay and Honey?

Billy (Perry Fenwick) was distraught when he saw Jay (Jamie Borthwick) and Honey (Emma Barton) kissing and is failing to get his head around the prospect of the two of them being together.

Even though Jay and Honey were hesitant about telling Billy about their relationship, things are going relatively well for the two of them! Honey is happy, something she hasn’t been for a while following her attack and awful relationship with Adam, but will Billy ever accept his ex-wife and Jay being together?

Billy isn’t one to let Honey go, will he attempt to split them up in the hope Honey will get back with him?

Will Mick and Linda move back into the pub?

Mick and Linda (Kellie Bright) were surprised when Max (Jake Wood) announced he had managed to get the pub back for them.

It’s been a difficult few months for Mick and Linda, as they have attempted to adjust to life the other side of the bar, and have also been dealing with Mick’s child abuse ordeal.

The news they can have the pub back couldn’t have come at a better time, and after Sharon told Phil (Steve McFadden) she only had a month left as pub landlord, it’s seemingly been confirmed Mick and Linda will be returning to the place they called home for seven years.

But if the reason for their departure was due to Linda’s alcoholism, how will she fare back in a location where she can get her hands on alcohol at any moment?