The Chase: Bradley Walsh red-faced as player proves ITV host wrong ‘Not gonna be that!’

On Wednesday, ITV viewers got another chance to see Paul ‘The Sinnerman’ Sinha take on four budding quizzers in their quest for some serious cash. With Bradley Walsh on hand to provide the questions, it was left to players Will, Melanie, Jenny and Andy to try and best Paul in their head-to-heads. However, when Melanie took to the table, she seemed to face opposition in the ITV host as well, who wasn’t too keen on one of her answers.

With Andy bowing out of The Chase at the first hurdle, Melanie took on Paul in the hopes of being the first contestant to make it to the Final Chase.

Securing £4,000 in her cash-builder and providing a number of impressive answers, the stage was set for Melanie to make it home.

However, during her head to head with Paul, she faced a rather tricky question about classical singer Aled Jones.

Reading the question aloud, Bradley said: “Aled Jones forgot the words to what song while singing at the Royal Variety Performance?” 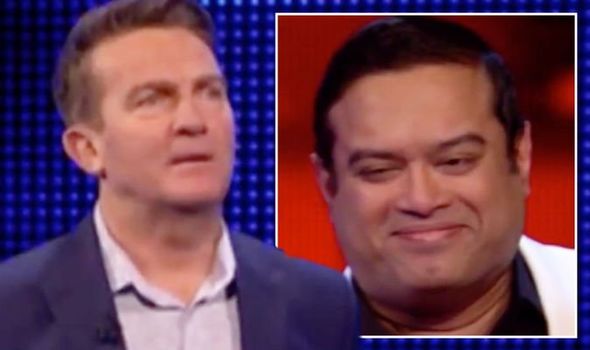 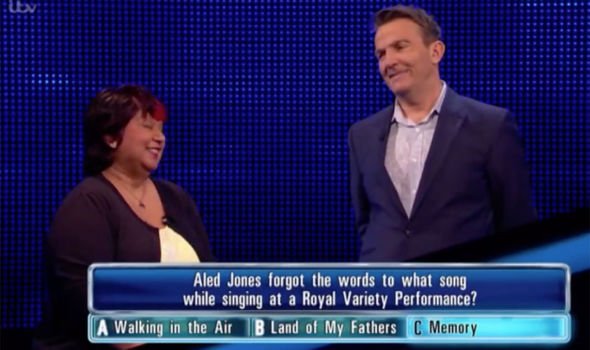 The first of the possible answers was Aled’s famous single Walking in the air.

Answers B and C, respectively, were Land of My Fathers and Memory.

Spotting the irony in “Memory” being a possible answer, Bradley began to chuckle. 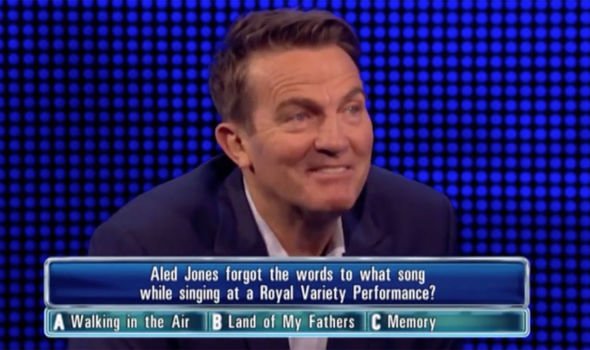 Much to his surprise, Memory was highlighted on the screen and Bradley became lost for words.

“Melanie,” a disappointed Bradley said as he turned to the player as she joked: “Who knows? He forgot the words.”

However, Bradley was certain Melanie had got her wires crossed, adding: “It’s not gonna be that.”

“Correct answer is…” Bradley added who was stumped for the second time to discover it was indeed correct.

With egg on his face, Bradley pursed his lips while Paul took great pleasure in seeing the presenter proved wrong.

Bradley did manage to see the funny side of his embarrassing error as he carried on: “Step closer to home, that is brilliant.”

The Sinnerman also knew the correct answer and also selected Memory as Bradley began to explain himself.

“Did not know that fact,” he said before Paul delved into his thinking.

“The most obvious answer is Walking in the Air because that’s the song he’s most famous for,” Paul said.

He concluded: “Then I thought: why ask the question?”

Melanie eventually did make it back to the Final Chase but was only accompanied by Jenny after Will followed in Andy’s footsteps.

And the players managed to win the £5,000 they’d taken to the Final Chase as Paul incurred a number of mistakes in the last head-to-head.

The Chase continues weekdays at 5pm on ITV.