Conners fans won’t be left waiting for Dan and Louise to say “I do.”

As teased in TVLine’s annual Fall TV Preview, the newly engaged couple are moving full speed ahead with wedding planning. In fact, pending any last-minute scheduling changes by ABC, Dan will remarry before November Sweeps.

“There will be a huge wedding very shortly, within the first five episodes,” executive producer Bruce Helford tells TVLine. “[Fellow EP] Dave [Caplan] wrote the wedding episode. It’s great, and we’re really looking forward to it. It’s a complicated moment for the Conners, but it’s also a joyous moment.” The effects of the wedding, he says, play out over “multiple episodes.”

As a result of Dan and Louise’s tying the knot, Louise will (presumably) give up her apartment and move into the Conner home — and that, of course, comes with its own set of challenges. “If she’s going to move in, that would create lots of problems for Dan,” Helford teases, ever-so-coyly. “A person wants [a home] to be their own, and they want to make changes. That’s going to be very interesting, as to how Louise deals with that, and how Dan deals with that.”

We’ll also see how Louise’s relationships evolve with Dan’s adult children, now that she’s going to be their stepmother. “Because Louise kept herself one step removed by keeping her place — sometimes staying overnight and sometimes not — the family now has to start figuring out those interactions as they become more intimate and [see each other with] more regularity,” Helford says. Louise and Darlene, for example, are going to experience a change of sorts during the live (!) Season 4 premiere — “and there is going to be a continued change” as they become more involved in each other’s personal lives. 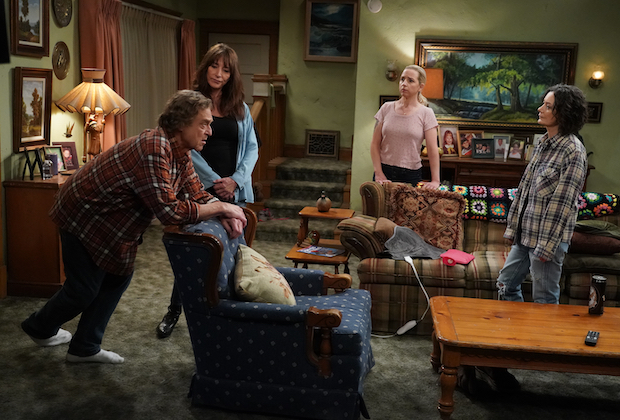 Despite Louise becoming an official Conner, portrayer Katey Sagal will remain a recurring guest star. But not to worry: Helford assures us that Sagal — who appeared in 10 of Season 3’s 20 episodes, while also headlining ABC’s since-cancelled Rebel — will appear “on a pretty regular basis” this year. “I don’t know if there’s an actual number,” he says, “but I know that she’s going to be in more than half the episodes.”

The Conners returns Wednesday, Sept. 22 (ABC, 9/8c). For additional scoop on the Season 4 premiere (and beyond), check out TVLine’s Fall TV Preview Spectacular.