House of the Dragon has taken the concept of Easter eggs to a new level with an Easter egg that is, quite literally, an egg. Before we get into it, be warned that this article is full of spoilers based on Fire & Blood, the source material for House of the Dragon written by George R.R. Martin.

The Easter (Dragon) Egg in Question

The 🥚 is a major topic of discussion in House of the Dragon’s second episode, when we learn that Daemon Targaryen has stolen an egg from a dragon named Dreamfyre, taken it to Dragonstone, and intends to use it for his and Mysaria’s future child (though, turns out Mysaria isn’t actually pregnant and Daemon is just doing the Westeros version of trolling everyone for attention). But when Rhaenyra learns the egg was the exact same one she picked out for her baby brother (who passed away in his infancy at the end of episode 1), she flies to Dragonstone to retrieve it. 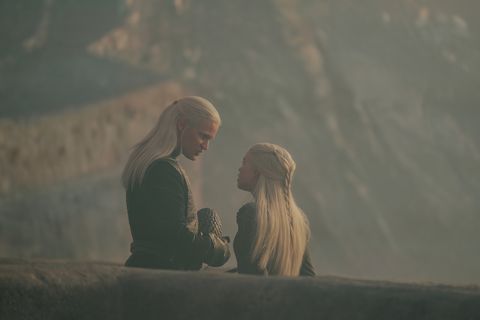 There’s a bunch of pre-House of the Dragon info to go over when it comes to Dreamfyre—all of which is quite literally ancient history (meaning nothing in this particular section is a spoiler!). According to Fire & Blood, Dreamfyre is a female dragon who bonded with Princess Rhaena Targaryen (Rhaenyra’s great-grandfather’s sister) when she was around 12. Dreamfyre is described as a “slender, pale blue she-dragon with silvery markings, who had already produced two clutches of eggs.” 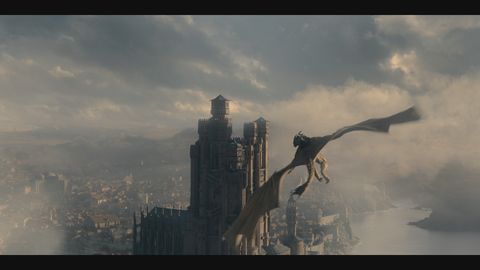 Long story short—because there is a LOT of lore—Princess Rhaena’s dad was king, he died, her less-than-friendly uncle Maegor took over the throne, and she had to flee to safety. Then Rhaena’s husband Aegon (who was also her brother, help) went to war with her uncle, Aegon died, and she once again had to flee the area—with Dreamfyre right by her side. Rhaena eventually ended up having to marry Maegor in a wedding ceremony with two other brides (again, help), and after his death, she and Dreamfyre moved to Dragonstone—where Dreamfyre spent her time laying a bunch of eggs that everyone wanted to buy/steal. Which brings us to…spoilers!

Dreamfyre’s Role in House of the Dragons

After Rhaena’s death, Dreamfyre was ridden by Princess Helaena—who we’re eventually going to meet. Helaena is the only daughter of King Viserys and Alicent Hightower—who ends up marrying her brother Aegon II Targaryen. Aegon is crowed King when Viserys eventually dies, and a battle for succession (aka the Dance of the Dragons) begins. TBD on how far HOTD will take us, but Helaena eventually dies as well, and Dreamfyre goes out in a blaze of glory during the Storming of Dragon’s Pit. 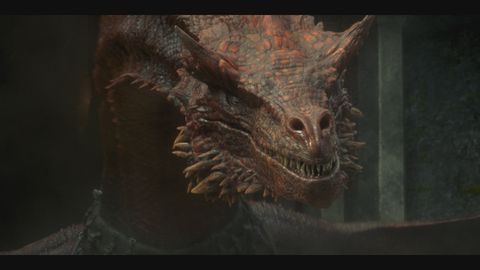 Dreamfyre laid a lot of eggs in her time, including three that were stolen from Rhaena Targaryen by a woman named Elissa Farman. No confirmation, but there’s a theory that these three stolen eggs are the ones that ended up in Daenerys Targaryen’s hands, later becoming Drogon, Viserion, and Rhaegal!