'The Masked Singer': How Snow Owls Managed Not to 'Kill Each Other' 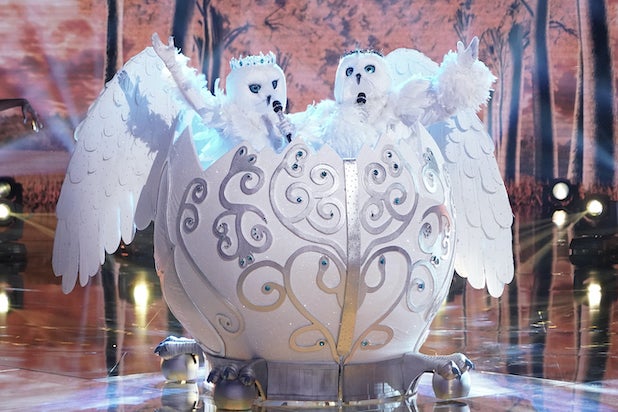 (Warning: This post contains spoilers for Wednesday’s “The Masked Singer.”)

“The Masked Singer” eliminated the Snow Owls tonight, the Fox singing competition’s first-ever two-headed contestant, and unhatched the giant egg the two masked celebs had been performing inside of to reveal husband and wife Clint Black and Lisa Hartman. And while the couple were “honored” be the show’s inaugural duet competitors, Black says he and his wife are fortunate they “didn’t kill each other” while stuck inside that contraption for three episodes.

“This was a big deal for the show, a big move for them, the first time anywhere in the world they’ve done that,” country music singer Black told TheWrap. “So we were thrilled they asked us to do it. After first we laughed and laughed, just the idea of doing the show and then we realized, ‘Oh, we have to do this.’ And then we weren’t laughing anymore. We were thinking, ‘Oh no, we’re going to do this!’”

Black says the couple costume, which consisted of their individual feathery full-body masks and that large, motorized egg, was “very limiting” and competing for two was “probably twice as much of a challenge in every way,” including picking songs that worked for both him and Hartman, who is also a singer.

“Fortunately, we’ve been married almost 30 years and we, I think, fared better than we would have doing it alone,” he said.

For Hartman, there’s “no way to describe” what performing with her husband — which she has done before, but not in this way, of course — in that confined space was like.

“There’s not enough time and energy in the day,” she told TheWrap. “You get inside an egg, they zip-tie it. You have hand breaks. You want it to go left, it wants to go right — or it doesn’t want to go or it doesn’t spin. I mean, it was just every day. We were either laughing or frustrated or I would start laughing so hard I was bent over and he had get me up… The egg, in and of itself, was such a challenge but so much fun. I mean, nothing compares to it. It’s the most bizarre planet you could ever go to.”

Black and Hartman’s time on “The Masked Singer” inspired him to write a new duet for the couple, “Till the End of Time,” which comes out Dec. 3 and will be performed by the pair during a live-streamed, limited-capacity show at the Ryman the day before.

“I was able to get her to sing more on this one after ‘The Masked Singer,’” Black said of his wife, who has previously recorded songs with him.

Well, after performing in an egg for days together, we imagine just singing a duet was a piece of cake.

“The Masked Singer” airs Wednesdays at 8/7c on Fox.