Stella Bak is the quiet type. As the distressed anchors and flustered producers scurry about The Morning Show’s Manhattan newsroom, Stella (played by Greta Lee with a poise that barely reveals her umbrage) watches and listens more than she runs or shouts. When she speaks, she does so with a purpose befitting her mandate as the network’s new president of news, sent in to help UBA President Cory Ellison (Billy Crudup) change their toxic workplace. Despite prolific anchor Alex Levy (Jennifer Aniston) and newcomer Bradley Jackson (Reese Witherspoon) oh-so-publicly outing the company’s noxious culture following a slew of #MeToo-related allegations, UBA is still operating under institutional systems of discrimination, and that cannot stand.

Young and hungry, Stella isn’t here for your bullshit, but she still faces a never-ending stream of it: Her boss won’t listen to her ideas, her coworkers don’t trust her and, oh yeah, the anchor whose co-host and best friend turned out to be a sexual predator is being brought back to the very office she abandoned nine months prior. Alex’s return isn’t Stella’s idea — she doesn’t see the logic in courting a former star who represents the old regime rather than embracing new voices on the company’s biggest news platform. But her white, middle-aged boss still has a soft spot for Alex, and more importantly, he has a vision. So that’s that. Sounds kinda hard to start fresh, huh?

Stella struggles to have any sort of impact on her show, but what’s far more frustrating is that her character has just as little impact on “The Morning Show,” the Apple TV+ drama that remains creatively and dramatically inept throughout its 10-episode second season.

Despite an unfounded narrative that Season 1 “got better” as it went along, “The Morning Show” has been as consistent in its eye-rolling melodrama as it has in its hesitancy to wrestle with the questions of power and responsibility at its core — even Alex and Bradley’s long-awaited “Network” moment in the first season’s finale is cut into a montage, blurring specific language and key revelations in favor of implying that they said “something important.” In Season 2 (all of which was screened for critics), the series remains murky in its high-minded purpose and erratic in building meaningful drama, but most disturbing is an about-face in its dominant point of view: If Season 1 examined how a patriarchal system all-too-permissive of bad male behavior could be forced to change by external and internal efforts (aka Bradley and Alex), then Season 2 asks if those efforts went too far. Alex, Bradley, and Cory have ceased being so angry they aren’t going to take it anymore; instead, they’re so scared of being publicly shamed they’re willing to do whatever it takes to avoid it. 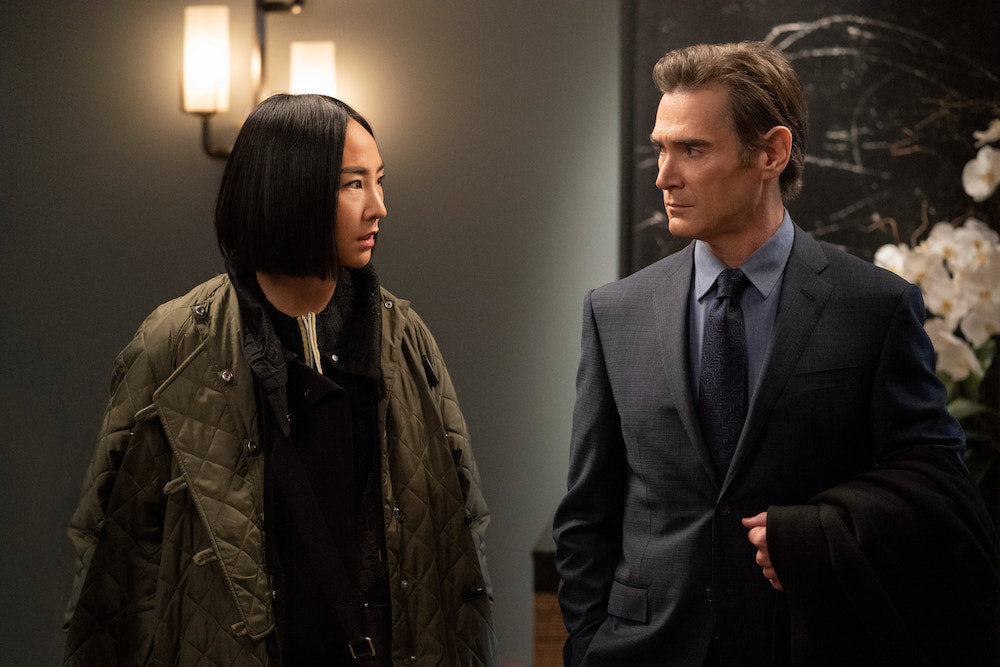 Greta Lee and Billy Crudup in “The Morning Show”

Yes, “The Morning Show” Season 2 revolves around “cancel culture,” and yes, its ultimate point seems to be that personal and professional accountability are bad, actually. Picking up in December 2019, Bradley is still co-anchoring UBA’s The Morning Show, only now she’s singing and dancing (for real) with new newscaster Eric Nomani (Hasan Minhaj). Alex, in leaving the show, has become a feminist icon — landing her own black-and-white Time magazine cover with the headline “The Woman Who Told the Truth” — and now lives alone in Maine, typing away at her tell-all memoir. But when it comes to Mitch Kessler (Steve Carell), she doesn’t tell nearly enough, and her publisher pushes Alex to take a longer look at her shared history with the exiled predator before going to print.

One of the most exciting aspects of “The Morning Show’s” first season was director Mimi Leder (who’s back helming four episodes of Season 2, along with Lesli Linka Glatter, Rachel Morrison, and an all-around incredible team of directors) and one of the finale’s few encouraging moments was her final shot’s slow retreat from Mitch; after being promised an interview on live TV that doubled as his shot at public redemption, Alex and Bradley’s on-air confession cut him out of the show, and Leder’s closing adieu, which pulled away from Mitch as he sat stewing in his big empty mansion, felt like a much-needed “fuck you” to a bad man we already knew all too well. But alas, Mitch is back, carrying his own episode arcs through most of Season 2 after fleeing persecution in America to live alone in an Italian villa and mope through a self-imposed sex-ile.

Why “The Morning Show” feels so committed to giving Mitch’s bland, predictable, “old guard” point of view equal weight to those of supposed gamechangers like Alex and Bradley is part of a larger problem surrounding the show’s relationship to power — but it’s also just dull. Veteran TV fans should see where things are going early on, even if getting there is somehow tedious and ludicrous, and while the rest of the crew’s arcs aren’t exactly satisfying, they’re at least active. Many are half-assed and nonsensical, like producer Chip Black, whose inexplicable return is held together solely by Mark Duplass’ naturalistic performance; others are enigmatic until they’re painfully obvious, like Emmy winner Billy Crudup’s Cory “#NotAllMen” Ellison, whose virtuous crusade on behalf of women can’t make up for a doomed late-season twist. Speaking of surprises, I dare not say one word about Bradley’s main storyline, although it’s ultimately just another reminder that the show doesn’t know how to build toward anything. 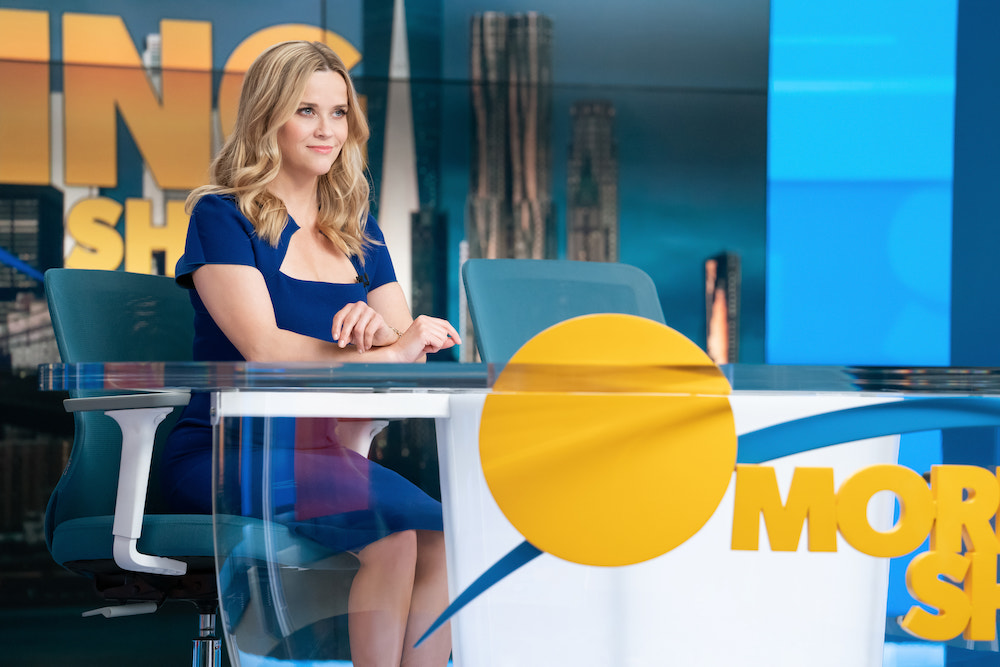 Reese Witherspoon in “The Morning Show”

And then there’s Alex. In between all the accolades and book-writing, she has a breakdown that leaves her paralyzed by fear. It’s why she’s living in a remote cabin in Maine, why she left the show, and why she probably shouldn’t go back, at least until she deals with the root of her panic. But this is TV, and Alex/Jennifer Aniston has to come back, so you know she’s going to try, just like you know it won’t be easy: There’s another behind-the-scenes book on UBA looming, this one written by New York Magazine reporter Maggie Brenner (Marcia Gay Harden), and it’s got Alex spooked. What will it say? How much will it say? Does Maggie know Alex slept with Mitch (twice, as revealed in Season 1)? Will that revelation get her comeback prematurely canceled? Should she jet-set around the globe trying to cover it up, while talk of a little thing called COVID makes its way into the news?

The glare of the spotlight and the anxiety over being “canceled” don’t mix, so Alex spends most of the season in various states of desperation. It’s not only a clear regression from where her character ended up last year, but a choice that fails to stretch Aniston’s range in similar fashion to Season 1. (Remember the board room scene? Hell yeah you do! Welp, that kind of thing’s gone now.)

What little tenacity “The Morning Show” had is gone with it. Dark, ominous meetings give way to sunny offices built to evoke envy. Season 2 soon feels like a very expensive, very bland network drama. Yet even as broad, star-driven soap, it isn’t that fun. When Alex and Bradley fight, it has to end with one of them saying, “the gloves are coming off.” Why? Because it’s not clear enough from the fight itself that a line in their relationship has been crossed. Showrunner Kerry Ehrin and her writing team have to repeatedly spell things out for the audience, explaining how they should feel rather than evoking actual feelings, which doesn’t make for the kind of juicy, indelible moments these actors have delivered in the past. It just makes for a spectacle that’s hard to ignore.

Soon enough, the series devolves alongside its star, succumbing to the same panic Alex feels. And really, that’s to be expected. “The Morning Show” and The Morning Show parallel each other again and again, and everyone involved in both is privileged and powerful, from the wealthy central characters to the A-list stars and mega-tech company backing them — why wouldn’t they be afraid of losing their status, and how could that fear not take top priority in the lives they lead and the story they’re telling?

But “The Morning Show” doesn’t know how to interrogate these questions. Any drama that takes its central subject seriously — whether that’s fostering a safe workplace, fighting the patriarchy, or finding the line between objectionable and inexcusable behavior — should acknowledge the challenges of creating real, lasting change. (And a good drama would know how to craft engaging stories out of those challenges.) Altering systems that have been in place for hundreds of years isn’t easy, but Alex & Co. seem to have reversed course. This isn’t an insightful look at how sexual misconduct persists in American culture, a dissection of modern news consumption, or a hard look at who’s framing the world’s biggest stories; it’s a shouting match between powerful people terrified of losing their power. No one’s trying to tear down the system because no one understands why anyone would want to.

Stella Bak is the quiet type, but that doesn’t mean she lacks things to say. She’s the only one consistently fighting for what everyone around her purportedly wants, and watching them fumble around with personal distractions is exhausting. After 10 hours doing the same, I can empathize. “The Morning Show” Season 2 may be so glossy it’s hard not to stare into the sun, but in the end, all you’re left with is a headache. If Stella had the power that should come with her title, I think she would’ve canceled both shows a long time ago.