'The Office': Rashida Jones Talks Being in Awe of Steve Carell and Being Too Nervous to Improvise

Rashida Jones was incredibly nervous to be playing Karen Filippelli on The Office. The show was her “big break,” and she was acting opposite some immense talents.

Steve Carell’s portrayal of Michael Scott on The Office will go down in history as one of the funniest characters on television. Jones says when she’d act with him, she’d be laughing so hard she worried about getting fired. 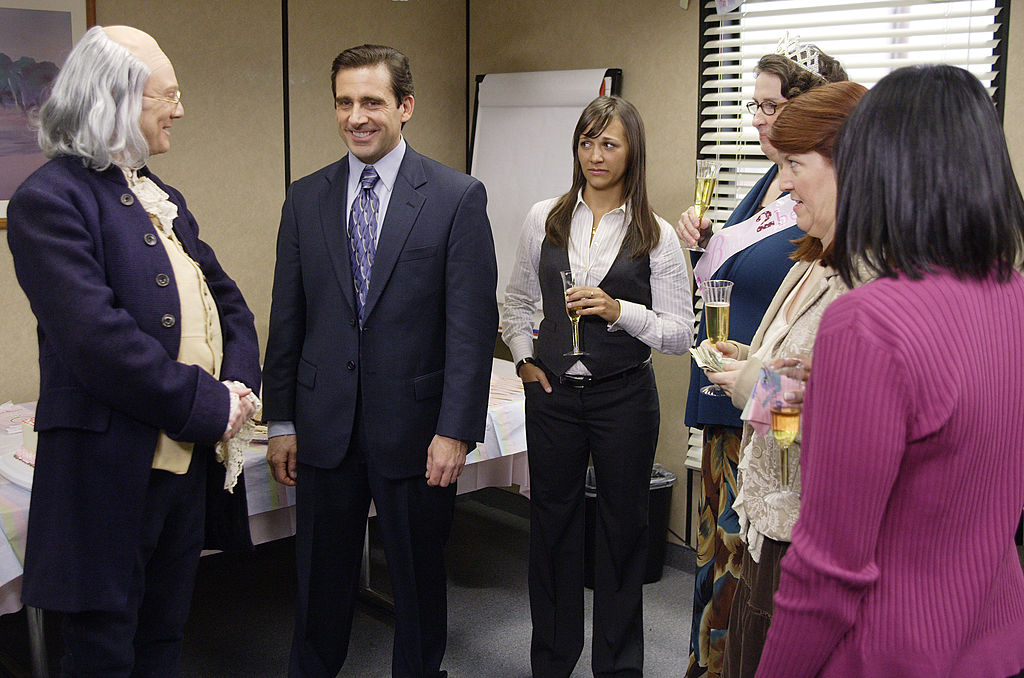 “My first day on the Scranton set, I was sure I was going to get fired because we were doing a conference room scene and Steve Carell was being so thoroughly and relentlessly funny that I couldn’t stop laughing. He did something different, weird and incredible with every take. I seriously thought I was going to be excused, I was guffawing while they were rolling,” she told The Hollywood Reporter in 2013.

In a more recent interview Jones did with Off Camera, she spoke more about how incredible Carell was in the role of Michael Scott. She says she “paid attention” when Carell was acting. Even when she wasn’t called to set, Jones said if Carell was acting she’d show up to watch him.

“Steve Carell. What he did every day on that show, I’ll never forget it. Because he was so dedicated to the part. He tried something totally new and so weird on every take that was like fully honest and fully hilarious and also had like a ton of pathos every single take. Every single take they could have used,” she said.

RELATED: Ricky Gervais Warned ‘The Office’ Writers About Making Michael Scott Too Big a ‘Buffoon’–Here’s How They Made Him Still Likable

Jones says she was particularly in awe of Carell’s improvisational skills, something she had a hard time with herself.

“I don’t think that I ever could do what Steve does. But I thought to myself, ‘I’d like to do that. I would love to do that.’ I was way too nervous on The Office. Once and a while I would pipe up and improv. By the end of the season I was like doing a much better job of that,” she said. “But I think I probably put it more into practice when I got to Parks because it felt like I was more involved from the ground up.”

Jones isn’t the only Office actor who was and still is blown away by Carell’s performance. Jenna Fischer (Pam Beesly) told The Hollywood Reporter in 2017 that Carell “is a master of timing.”

You get it. #TheOffice

RELATED: The Interesting Reason ‘The Office’ Writers Were Also Actors on the Show

“When I think of Steve I just think of the word precision. He is so precise in his ability to land a joke or to land an emotional beat, and yet it appears effortless. I don’t think you ever see him trying. It’s just a really beautiful quality, really a treat to get to work with him for so long and get to observe that. And I’m not sure if it’s something you can learn. You either just have that inherent sense of timing, or you don’t,” she said.

Read more: ‘The Office’: Jenna Fischer Reveals What Pam Says to Michael at the Airport in Season 7